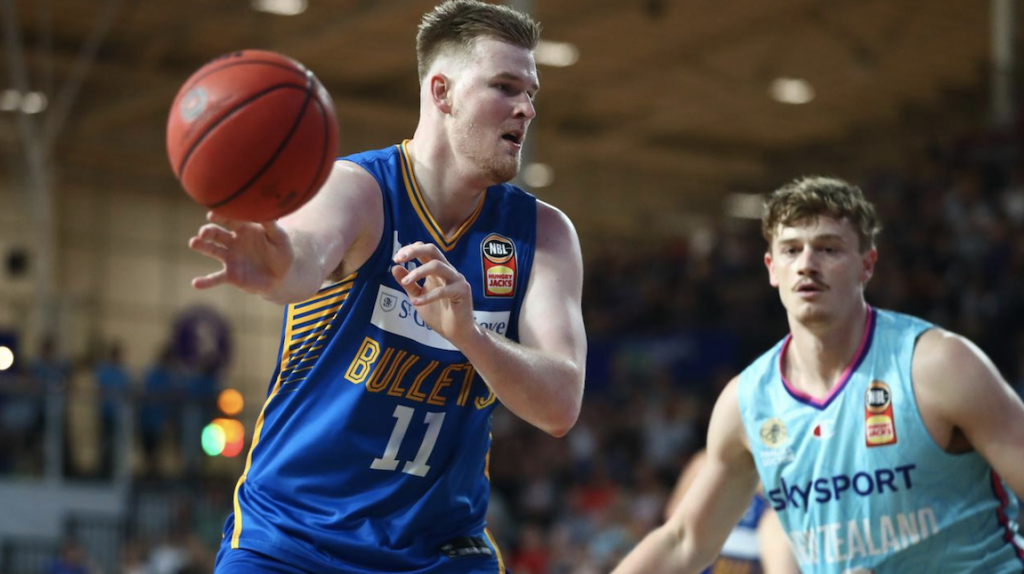 THE Brisbane Bullets’ chase for a top-four seed continues after they put on a four quarter clinic last night back at home in Queensland, defeating the New Zealand Breakers, 88-67, adding to what seems like an ever-growing avalanche of good form as of late for the team from the Sunshine State.

Even though Brisbane shot the ball at an abysmal 33 per cent from the field in the first, the home side was able to snag a 21-19 lead over the Breakers in just 10 minutes of action, and emerge from the first period with an abundance of momentum thanks to their power weapons Nathan Sobey, Vic Law and Anthony Drmic scoring five points each.

Both teams continued to trade buckets in the second term. Most noticeably it was Harry Froling that made a substantial impact, with the center adding his thirteenth point to the Bullets’ first half points total after a ridiculous behind the backboard shot on the buzzer, putting Brisbane up at half time 44-39.

Colton Iverson’s second quarter was especially quiet given his impressive first, while Tai Webster continued to hit his shots during the initial two stanzas with 13 points and three assists. However, Matthew Hodgson started to answer the call off the bench with a few nice finishes, helping lead the Bullets to what ended up being a rather impressive first half in the end.

Froling continued to make his name known down low as too did Drmic with the sharpshooter making the opponents pay from long range and the Bullets widening their lead to 16 points by the final break (64-48) and limiting New Zealand to nine points in the term. Meanwhile, the battle between Law and New Zealand’s Thomas Abercrombie was proving to be a hotly contested one at that.

The Bullets had won all three of the opening three quarters, and the fourth looked to follow a similar fate. With Hodgson adding to his night on the scoreboard and Jason Cadee aiding as well, Brisbane was in good stead to finish strong.

Finn Delany and Webster tried their best to ignite some form of a spark, but the home side was poised to make their homecoming back to Nissan Arena a happy one. Pushing their lead past 20 points, fans could relax and watch the Bullets coast to their ninth win of the season.

Consistent shooting quality helped raise Brisbane’s field goal percentage in the latter three periods up to a solid 45 per cent, while the Breakers themselves slumped back down to 39 per cent. The Bullets also found more success from deep, knocking down seven triples – three more than their opponents.

Astoundingly, the difference was clear-cut on the glass where Brisbane dominated the category 51 to 38, which helped contribute to 21 second chance points on the offensive end and 52 points in the paint compared to New Zealand’s 40, key wins in their journey to the victory last night.

Just two points off his career-high in scoring, Froling’s 20 points and four rebounds was the highest scoring total for the big at his new franchise as he was finding numerous methods to scoring all night from various locations. Hodgson and Drmic each accounted for 16 points apiece, while Sobey finished with a quiet 12 points and three assists.

Including Froling, Webster was arguably the best player on the court in last night’s closer with 19 points, 5 assists and four rebounds, whereas the only other Breaker to produce over 10 points would be the 12 and nine rebounds by Delany.

Brisbane pulled within half a game of the top four once again as the South East Melbourne Phoenix also grabbed a victory yesterday, but signs are promising for the Queensland side while the Breakers drop to four wins and 10 losses. New Zealand and the Bullets will square off again six days from now, although the Dan Shamir’s struggling side will open Round 11 proceedings in Bendigo against Melbourne United on Thursday.