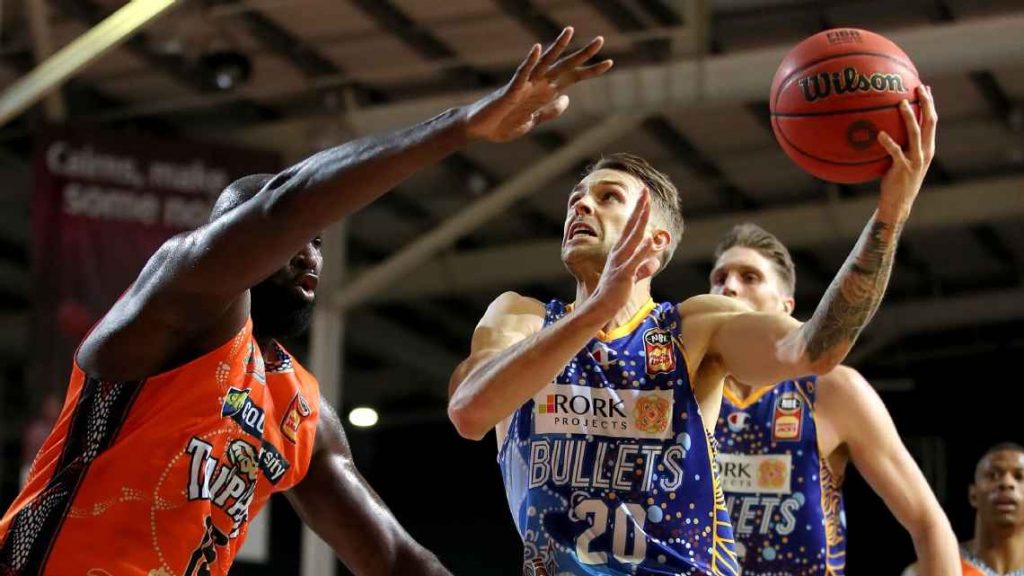 BULLETS snuck home against Cairns Taipans to clinch a narrow five-point victory (101-96) victory to keep their slim finals hopes alive. Although it was far from a convincing win – a win is a win – and the Bullets needed it to make a late challenge. It was clear that fatigue started to become a real factor as Brisbane fronted up for their sixth game in 13 days which is no mean feat.

It was an even start to the game as both Brisbane and Cairns took their time to warm into the game and feel each other out. Lamar Patterson picked up where he left off landing the first points of the game, a triple none the less to set the tone for the Bullets. It was not long before Scott Machado injected himself into the game helping to spur the Taipans on. The two sides traded buckets for majority of the quarter with neither team able to really pull ahead for the opening minutes of the term. Then all of a sudden, Cairns came to life with Mojave King finding his groove making a five-point play with a nice triple commencing the momentum shift. Within a blink of an eye the home side snuck out to an eight-point lead as Brisbane were left floundering. As the clock ticked down the Bullets upped the ante as both Tyrell Harrison and Harry Froling found the basket to peg the margin back to just one point at the quarter time break.

Things did not get much better for the Bullets in the second term as their lack of offensive pressure and execution gifted the home side a chance to steadily extend their lead. Nate Jawai was at his damaging best with the veteran winding the clock back credit to his strong takes off the boards and ability to sight the rim. Patterson up the other end worked gallantly to keep Brisbane in it as did Nathan Sobey but they simply lacked structure moving the ball forward. Inaccuracy plagued the Bullets while Cairns continued their merry way to keep the scoreboard ticking over and lead by eight points. Despite the Taipans rallying and piling on 11 points, the Bullets showcased their grit to go on a points scoring spree of their own sinking 11 points straight thanks to the efforts of Jason Cadee.

Bursting out of the gates in third quarter, to try and eat their way back into the deficit now that the shoe was on the other foot Jawai, King and Majok Deng stepped up to the plate and delivered for Cairns. A five-point ball game suddenly turned into level pegging as Cairns worked their way back into the contest and proved they were not about to roll over. Froling and BJ Johnson were highly influential for the Bullets throughout the third term as the duo ploughed away to keep the scoreboard ticking and although Machado was in just about everything it was not enough to give his side the edge heading into the final change.

The last quarter was played at a frantic pace as neither side could maintain ascendancy or control. The lead switched hands multiple times throughout the quarter as fans were sat on the edge of their seat. A scintillating couple of minutes from Venky Jois and Jordan Ngatai saw a spark lit in the Cairns camp as they crept back to within three points but in the end, Brisbane were the beneficiaries as the newly appointed Boomers representative – Sobey – landed the winning shot from the charity stripe to seal the deal.

King had arguably his best game for the Taipans sinking 25 points at 60 per cent from the field while Machado was also back at his best registering 23 points and 11 assists and teetered on the edge of a triple-double thanks to his six rebounds. Deng was influential with his 12 points as Jawai got busy with 12 points of his own and seven rebounds. Sobey had a hot hand for Brisbane with 21 points at 53 per cent from the field to accompany his eight assists. Froling was the next best thanks to his 20 points and eight rebounds as Patterson and Matthew Hodgson chimed in for 12 points apiece. The duo also combined for 13 rebounds as Harrison also plied his trade in the win with 13 points and six rebounds.