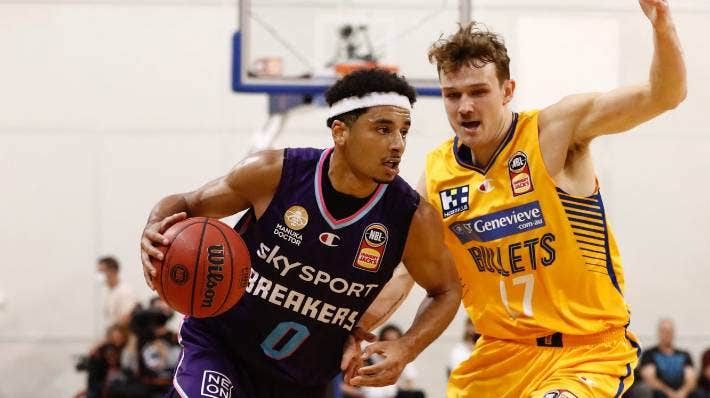 NEW Zealand Breakers are starting to click into gear, having moved to 3-6 on the National Basketball League (NBL) ladder following their hard-fought five-point win over Brisbane Bullets last night. The Breakers are still two wins adrift from the top seven – sitting in eighth – but have a couple of games in hand compared to their opponents, including the Bullets, who they defeated 97-92.

Following on from their huge win over Adelaide 36ers, the Breakers dominated the first term for a second consecutive match, scoring 27-12 (after 32-6 against the 36ers), to put themselves in prime position early on. The Bullets did come back with a 23-20 second term to cut the deficit to 12 at the main break, but they were up against it with the Webster brothers – Tai and Corey – again having strong nights out.

Brisbane made its move in the third quarter, piling on 31 points to 24, which saw the Bullets almost double their half-time score of 35 in just one quarter. It was back to a single-digit game with a term to play, as the Breakers led by five points into the last. Luckily they would hold on, despite some nervous moments. With 40 seconds on the clock, Anthony Drmic nailed a driving layup to cut the deficit to just three points but as they had all quarter, New Zealand responded with Rasmus Bach deliberately fouled as time ticked down into the final six seconds. He nailed both free throws and the Breakers came away with the win.

Corey Webster was named the Player of the Game for his 21 points, seven rounds and four assists, shooting nine of 14 from the field, and also picking up a steal. Tai Webster aided him in the back court with seven from 13, dropping 19 points, nine rebounds and four assists, while Bach came off the bench to score 16 points and four rebounds in 20 minutes. Colton Iverson (15 points, seven rebounds) and Tom Abercrombie (13 points, six rebounds and two blocks) also hit double-figure points.

For the Bullets, Victor Law knocked back 19 points and 10 rebounds in another standout performance, while Nathan Sobey‘s accuracy was down – just 35 per cent from the field – but he still hit 18 points, and picked up five assists, two steals and a block. Drmic (17 points, four rebounds and two assists) and Jason Cadee (14 points, six assists) also reached double-figures off the bench, but it would not be enough. Harry Froling‘s eight points, seven rebounds and two steals was also notable in the loss.

New Zealand Breakers coach Dan Shamir said it was a “very important” win and different to their triumph over the Kings.

“We had a good game, we started well just like the way we started well with Sydney the game before that,” he said. “It tends to be a very … let’s say games are never easy … and it developed in a way that was very unusual, and today we again started well and knew that it was going to get tougher, and knew that we were going to have some tough moments, that the Bullets would respond, that we’d have to play through it, through some mistakes and therefore it’s good that we did that.”

Brisbane Bullets coach Andrejs Lemanis said going down by 16 points early in the first term was the “key moment” that lost it for his side.

“The way we came out obviously wasn’t good, the last three games New Zealand have come out and sort of dominated teams in the first five or six minutes and it’s something we didn’t do a job of countering and we ended up on our heels for a bit,” he said. “I thought at the offensive end they pushed us out of what we wanted to do, and we settled for some contested shots, didn’t get through what we wanted to get through and that led them to getting out, feeling good about life and they certainly made some shots early as well.

“Some of that might have to do with our defensive coverages as well, but also when you’re not scoring, it’s hard to run back and get your defence set or go ahead and get disrupted up the floor. “That was the key moment, 18-2 in the first five minutes and we slowly worked our way back into the game but that’s not good enough because we didn’t win, it’s coming out with the right mindset obviously.”