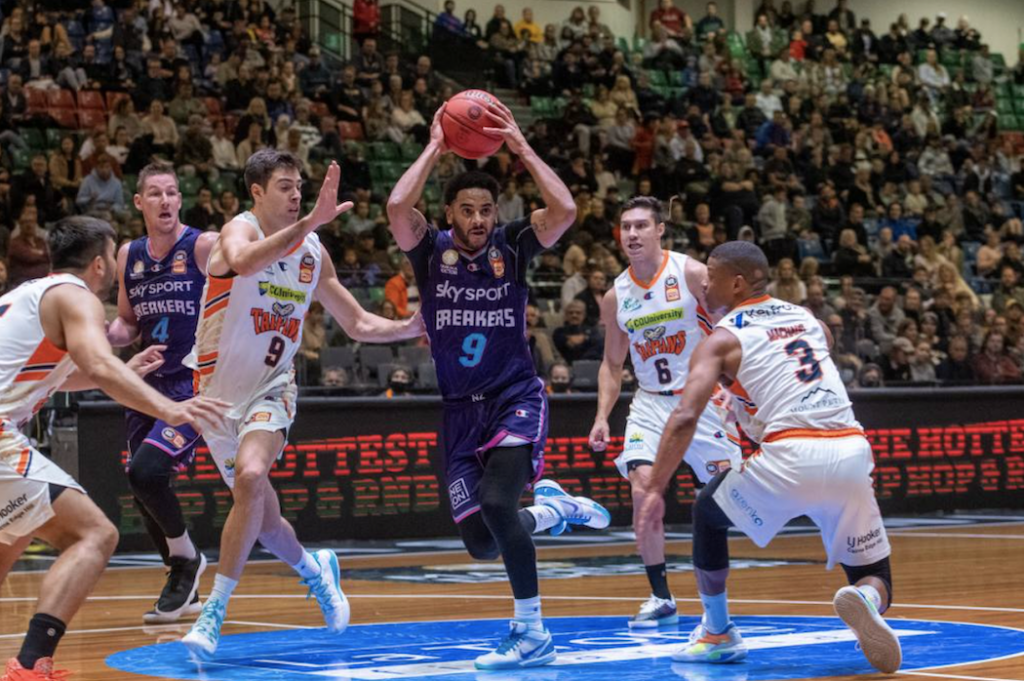 LEADING by as much as 19 points in the third quarter, the Cairns Taipans have survived a shock comeback effort from the New Zealand Breakers, squeezing out the 70-68 win in a contest between two of the NBL’s lowest ranked teams.

Both sides traded a bunch of turnovers on their way to shooting below 30 per cent each during the first quarter. The Taipans would lead 12-10 after ten minutes, the lowest combined score for an opening quarter this season which might have been expected from the two bottom teams in the competition.

Kicking off the second quarter with a dunk, Nathan Jawai ignited the engine of the Cairns offence as the Queensland-side strung together a solid 10-2 start capped off by a George Blagojevic triple. Cairns started to look comfortable down in Launceston after extending their lead out to double-digits and completely neutralising New Zealand’s ability to knock down the three ball, with the Breakers missing their first 14 attempts from deep.

Despite Finn Delany’s best efforts for the hosts and his 11 points in the second period alone, Cairns were feeling extremely confident after the conclusion of the first half leading 39-25. Jawai was embracing his new role as the Taipans’ main threat down low due to Cameron Oliver’s departure. The Boomer had himself 10 points and six rebounds in 16 minutes of action, whereas Scott Machado was finding the open man as per usual with eight points, six assists and four rebounds.

It was a more even third quarter as both the Breakers and the Taipans found their rhythm. Corey Webster started to knock down shots as too did Thomas Abercrombie as well after slow first halves. On the other side, Tad Dufelmeier and Mirko Djeric started piling on the points in the penultimate quarter.

Winning the third term 19-17 and now only trailing 44-56, Dan Shamir’s side could start to feel a bit of momentum throughout their roster. But New Zealand’s main problem was slowing down Jawai and Machado with the pair finding good offence at every turn.

An astronomical turnaround forced by the Breakers saw them reach within one point halfway through the fourth quarter, but Cairns were able to maintain the lead a little bit longer as the Taipans undersized line-up started to cause problems on the defensive end.

The contest would then go to the death with the Taipans finding themselves up by a single point once again with 22 seconds left on the clock. But two made free throws by Webster gave the Breakers the lead with one final possession to play. Extraordinarily, Dufelmeier answered back with a three-pointer as seven seconds still remained with Cairns up by two.

A last second block by new signing Venky Jois sealed the win for Cairns as the Taipans survived a tremendous second half flurry from the Breakers, stealing the away victory and reducing their distance off the bottom of the standings with win number six.

Doing a tremendous job of annoying New Zealand’s offensive success rate, Cairns held the Breakers to a meek 35 per cent from the field compared to the Taipans’ sustainable 42 per cent. The visitors also won in the assists category 16-12 and particularly from deep with seven threes (four more than the Breakers). A lone highlight for New Zealand, however, was their prowess on the glass earning a plus-six in rebounds, 43-37.

There was simply no stopping Jawai as the big man muscled his way through all challengers, finishing with 21 points and eight rebounds. Dufelmeier continued his good form with 14 points, three boards and a pair of assists, meanwhile Machado was good for 13 points, eight assists and six rebounds.

Concluding the night with a game-high 23 points and 14 rebounds including going 7-8 from the free throw line, Delany had himself an all-around outing for the Breakers. Webster was the only other New Zealand player to top more than 10 points, as the guard collected 15 points and seven assists. Lastly, Rob Loe fell two points and one rebound short of a double double leaving the court with eight points and nine rebounds.

Cairns will return home for a brief two-day reprieve before hosting the South East Melbourne Phoenix, while the Breakers will compete in some Monday night basketball against the hopeful Adelaide 36ers.