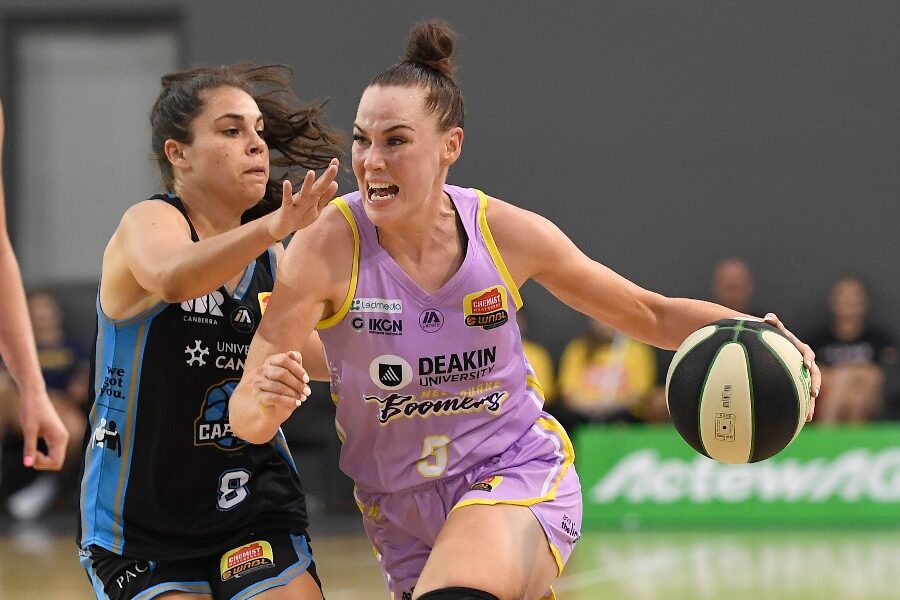 IT was a make or break game for the Melbourne Boomers who had their work cut out for them up against back-to-back premiers UC Capitals but did not disappoint stealing a six point victory (67-73). Heading into the clash the Boomers had a record of 4-1 and were stuck outside the top four with a big week of basketball to come showcasing just how monumental win was in dictating potential ladder position. The victory also proved that their best is definitely good enough to take down the ladder leaders and make a real push for a finals berth.

The lead ebbed and flowed throughout the game testament to the high quality players and all-star teams both the Caps and Boomers have before the Melbourne side forged ahead in the second half to create some strong momentum. Scoring seemed to well and truly dry up in the final quarter with both teams not finding the basket as regularly as normal however that played into the hands of the Boomers who held onto the lead and were not keen on relinquishing the buffer they had established.

Overall shooting accuracy was down for both sides however it was the Boomers that held a marginal upper hand converting at 40 per cent sinking 27 of their 67 shots. The Capitals only managed 34 per cent from the field and really struggled to find their radar from deep only nailing seven of their 21 attempts at 33 per cent while the Boomers managed a 40 per cent clip. Despite not leading on the scoring front UC impressed with rebounds collecting 45 to 40 while also registering one more assist than their opponents (17-16). Blocks were a major difference between the two sides with the Boomers showcasing their clear intent to stop the Caps in their tracks amassing six more than the ladder leaders (7-1) while they were also cleaner with ball in hand only giving up possession nine times compared to 11. The Boomers did the most damage inside the paint knocking back an impressive 34 points as opposed to 24.

There was an even spread of points scorers for the victors but it was Madeleine Garrick that recorded a game-high 19 points to accompany her three rebounds and one assist. Youngster Ezi Magbegor had a day out amassing a double-double thanks to her 18 points and 13 rebounds while teammate Tess Madgen also showcased her prowess knocking back 14 points, seven rebounds and eight assists in an all round solid performance. Captain Cayla George also proved to be a handy option adding 10 points to the tally while also collecting four rebounds and an assist, enough to get her side over the line.

The Caps were down on their usual high output and production with the topscorer the ever-reliable Kelsey Griffin who finished with 16 points, six rebounds and an assist to her name. the next closest was Maddison Rocci with 11 points while the only other player to record double digits for points was Brittany Smart with 10. Keely Froling had an impressive strake rate going at 42 per cent but only managed the nine points in what was a missed opportunity for the Caps. Mariana Tolo might not have been as productive on the scoreboard but was a huge threat off the boards dragging in an impressive 12 rebounds.

It is a tight turnaround for the Boomers who face off with Sydney Uni Flames tomorrow in another must win clash if they are to really stamp their authority on the competition. The Caps have a little bit more time, not playing until Friday but are set to face the Lightning who have proven to be a real threat when on song and raring to go.

Down at the opening break Perth turned on the afterburners for the remaining three quarters to hand Bendigo their ninth straight loss (95-79) and honour captain Katie Ebzery in the best way possible her 300th game. It was a slow start to the higher ranked Perth as the Spirit came out with a real intensity and desperation but they simply could not maintain that high level with the Lynx wearing them down and finding the basket with great ease as the game went on.

An explosive second term, really turned the tables into Perth’s favour sinking 30 points to 14 to create some scoreboard separation and put the Spirit well and truly onto the back foot. They continued that hot form into the second half outscoring Bendigo 49-43 showcasing their ability to work their way back into the contest and then maintain that element of control.

Perth made the most of their opportunities when close to the rim sitting at 50 per cent while Bendigo failed to find their range converting at a mere 38 per cent. The Lynx did their most damage when within two point range nailing 28 of their 41 attempts going at an impressive 68 per cent, 20 per cent more than their opponents who only managed to find the basket 17 out of their 35 attempts. Bendigo however were strong from beyond the arc boasting a higher three-point percentage of 29 and better accuracy from the free throw chugging along at 80 per cent compared to 68. Perth did not miss a beat on the rebounding front dragging down 47-36 while also impressing with ball in hand to record 25 assists to 20. They also led the way in steals with 5-3 and had less turnovers (7-9) in an overall clean and tidy game from both sides.

The return home for Darcee Garbin has done nothing but allow the youngster to flourish collecting an impressive game-high 28 points. Garbin proved to be the go-to girl for Perth finding the basket with great ease and converting at 50 per cent while also managed five rebounds and two assists. She was well aided by the likes of captain Katie Ebzery who knocked back 21 points, four rebounds and five assists in her 35 and a half minutes on court. The efforts of Alexandra Sharp did not go unnoticed with the guard starring with her staggering 17 rebounds, 13 of which were defensive along with her 12 points. Kayla Steindl also managed to chime in with her 13 points and fell just short of a double-double with nine rebounds while the only other player to make double figures was Alex Ciabattoni with 11 in her 30 minutes on court.

For Bendigo it was the usual standouts that stepped up to the plate and delivered with Tessa Lavey leading the charge thanks to her 23 points, seven rebounds and five assists in her 40 minutes. The next best was Demi Skinner who slotted 17 points to keep the scoreboard ticking over while also picking up six rebounds and two assists. The reliable, Carley Ernst once again plied her trade knocking back 16 points but could have had more had she been more consistent from the field converting at 35 per cent. She also collected eight rebounds and five assists while Amelia Todhunter proved to be handy off the bench with nine points, three rebounds and four assists.

Bendigo are still on the hunt for their first win of the season and their job does not get any easier set to lock horns with the Melbourne Boomers on Saturday while Perth face off with the fifth placed Townsville Fire.