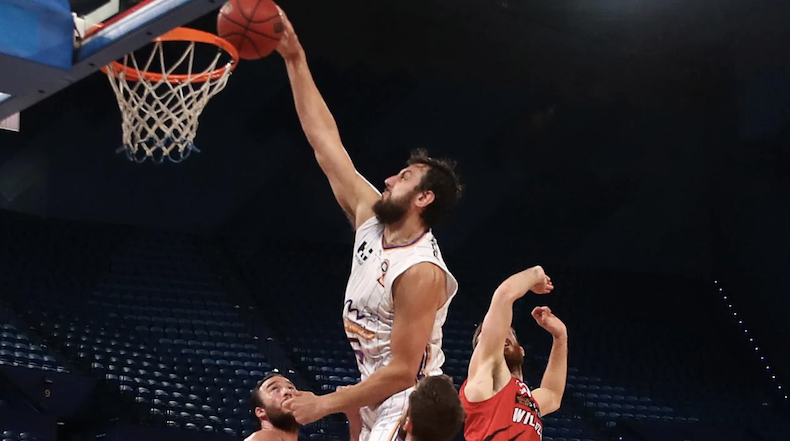 ANDREW Bogut has continued his unbelievable form from the first game of the National Basketball League (NBL) Grand Final series to play a starring role in helping his side level the series at one game apiece. Bogut amassed 19 points and 13 rebounds in Sydney Kings’ 97-83 win over Perth Wildcats at RAC Arena in Perth in front of an empty stadium to ensure the Kings headed back home to Qudos Bank Arena back on level terms.

After Perth upset the minor premiers on the road in Game 1, Sydney needed to conjure something special to level the series in the west, and with the threat of the Coronavirus very real and impacting all sports, the NBL made the decision to close off the stadium – and indeed the stadiums for the remainder of the series – to any fans. It meant the home court advantage was effectively mitigated, with only the travel factor the big difference.

The visitors started the game off on the right note with a 31-27 first term, then extended the lead to six by half-time with a strong opening half. Bogut already had a double-double by that stage, with Kevin Lisch also busy at the half, while Bryce Cotton and Nick Kay were the standouts for the Wildcats by the main break. Unsurprisingly, the Wildcats refused to give in and hit back in the third term with a 22-19 quarter to cut the deficit to three heading into the final term. A superb effort by the Kings in the final stanza saw them out run the home team with a 21-10 quarter to secure the 14-point victory, 97-83.

Bogut was the star with his double-double as well as two assists and one steal, shooting 61.5 per cent from the field. He and Lisch (19 points, two rebounds) combined well to get the team going, while leading scorer, Jae’Sean Tate kept the good times rolling with a team-high 20 points, three rebounds and two assists. Helping Bogut off the boards was Xavier Cooks with 10 rebounds to go with his five points and two assists, while Brad Newley had an underrated game of nine points, five rebounds and five assists. Casper Ware was again quiet for the visitors, having the eight points, one rebound, two assists and one steal in he match and shooting just 30 per cent from the field.

There was never any stopping Cotton with the this season’s Most Valuable Player (MVP) putting up a game-high 27 points, as well as five rebounds, three assists and one steal in the loss. The other two prominent scorers were Kay (17 points, seven rebounds) and Clint Steindl (12 points) with the latter coming off the bench to have an impact. Terrico White was quiet for the home side with just five points, three rebounds, while Miles Plumlee still had an impact off the boards but was overshadowed by fellow NBA player, Bogut, recording eight rebounds and six points.

The result means the series is now tied at 1-1 with the third game at Qudos Bank Arena tomorrow night – which will again be empty – before heading back to Perth for the fourth game. If the Wildcats end up winning a second consecutive road game, then they could celebrate back-to-back titles in heir home town, whereas if the Kings get up, then Sydney could steal the title while in Perth.