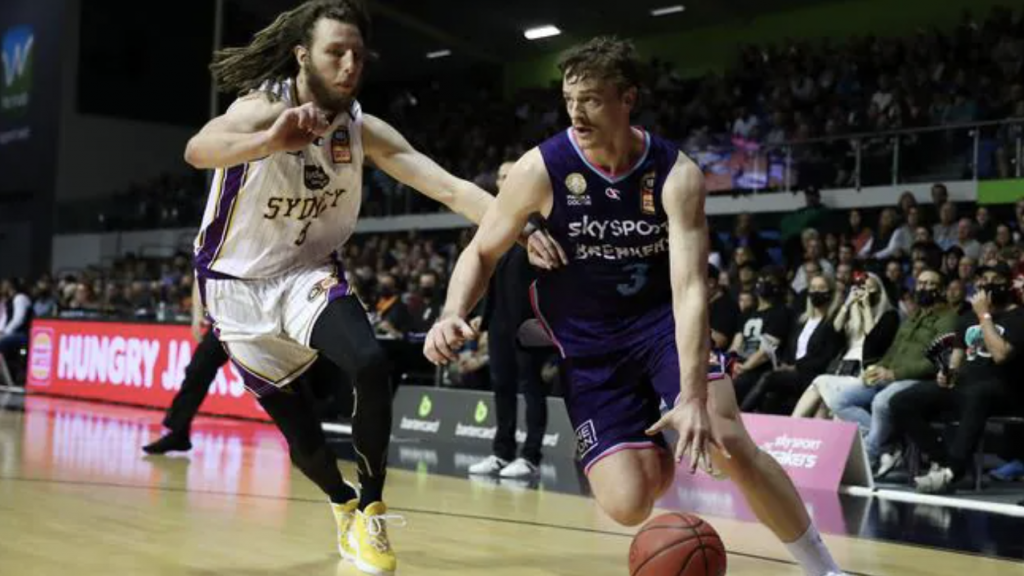 AUCKLAND hosted its first match of the NBL21 season last night and the home fans were spectators to a treat, watching the New Zealand Breakers defeat the top-four seeking Sydney Kings last night, 89-81, instilling confidence in the Kiwi side as they start their tour of Aotearoa on the right foot.

After a slight scare giving up the first two buckets in front of their eager fans, the Breakers bounced back quickly to take the lead just a couple of minutes into the contest. New Zealand traded buckets with Sydney throughout the opening period and thanks to eight first quarter points from Levi Randolph, both sides were tied at 26 points apiece at the first break.

The second quarter fell the way of the Breakers, despite some solid play by the Kings’ bigs Xavier Cooks and Jarell Martin. But it was Tai Webster’s ability to knock down the triple that created some breathing room for his team. Scoring 25 points to Sydney’s 13 in the second, the Breakers could enjoy a comfortable double-digit lead at the main break.

Good momentum continued into the third for Dan Shamir’s side, outscoring the Kings 23-15 and cementing a more than substantial advantage with a quarter to go, leading 74-54. It was Finn Delany that lit up Trusts Arena throughout the second half, as he seemingly could not miss the net from long range, racking up points at will and maintaining the team’s buffer.

Things seemed relatively quiet as the Breakers looked to run out the fourth, however Sydney were not going to roll over and die – mainly because of the ladder situation they are currently in. A flurry of threes and consecutive field goals from the Kings dwindled their deficit all the way to the middle stages of the final quarter, with the Breakers’ 20-point lead minimised to just five points following a Craig Moller triple.

Both Webster and Randolph found themselves with five fouls and an early exit in the last couple of minutes, with Sydney somehow knocking on the door after being down by as much as 21 points. But late baskets from William McDowell-White and Rasmus Bach were enough to get the Breakers over the line in front of an ecstatic fan zone before a final charge could be mounted by the visitors, taking out the eight-point triumph.

With both teams shooting above 40 per cent on the night, there was little room for error. Furthermore, New Zealand’s impressive 49 per cent overall shooting was significantly higher than Sydney’s 43 per cent, and had the Breakers shot slightly worse, perhaps the Kings might have completed their comeback.

A major talking point last night was the sizeable discrepancy in three-point shooting. Led by Delany, the Breakers capitalised on 14 three-point attempts (51 per cent), whereas the Kings were good for only six of theirs (23 per cent). New Zealand also showed off their ball movement with eight more assists than their opponents (19-11).

It was ill-fated that the Purple and Gold could not make a serious impact in many of the major scoring statistics, even though Sydney were superior in several other areas such as turnovers (13-14), points in the paint (48-26), points from turnovers (13-9) and points off the bench (22-21).

Playing 38 minutes last night, Delany finished with 28 big points and 12 rebounds, knocking down four triples and hitting all six of his free throw attempts. Randolph and McDowell-White were the next highest contributors for the winning outfit with 13 points and nine rebounds, and 12 points and seven assists respectively for the two recent signings. Meanwhile, Tai and Corey Webster finished with 11 points apiece.

Casper Ware was deadly from the field going 8-19 from the floor, encapsulating a solid performance with 20 points, four rebounds and three assists. Martin was rather absent on the boards with five rebounds while still walking away with 18 points and Cooks remained the only other double-digit scorer for Sydney with 15 points.

Both these teams will do battle once again in New Zealand tomorrow night when the stage moves to New Plymouth at TSB Stadium, with New Zealand trying to give the residents of Taranaki more to cheer about. On the other hand, the Kings are at risking of losing serious ground in the standings with another loss as they pursue the Illawarra Hawks who are sitting half a game ahead at this stage.