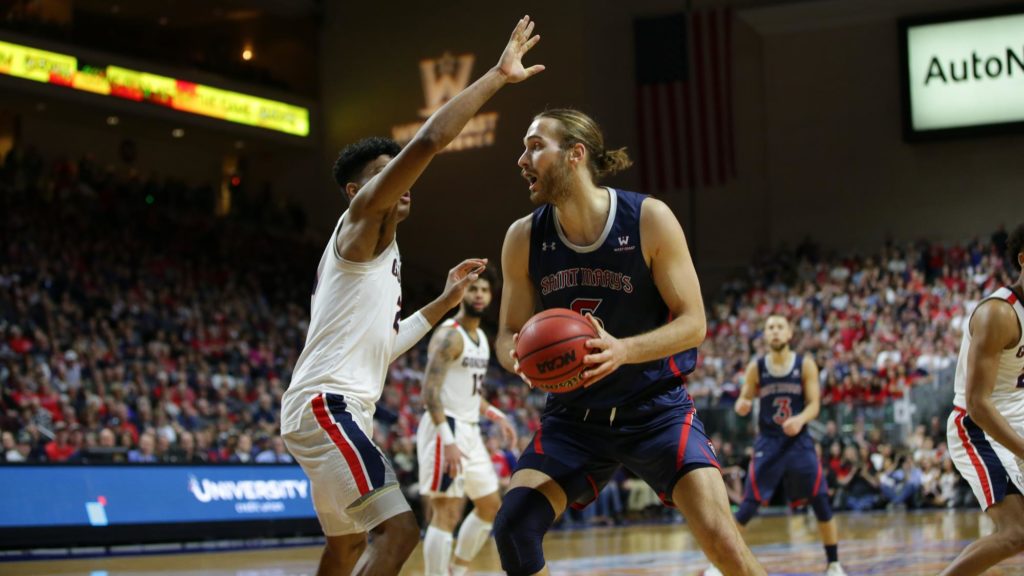 ONE of four Australians with Saint Mary’s the past season, Jock Perry towers above the rest at a huge 216cm and 113kg. Playing at the five, Perry only just finished his Junior season so still has another year in college. While there are plenty of doubts over the immediate future of sport, the Melbourne-born center has made the most of his time off the bench for the Gaels.

Malik Fitts plays starting center for Saint Mary’s and averages 34.6 minutes per game with an average of 16.5 points, 7.1 rebounds, 1.2 assists and 1.3 steals per game. This restricts the amount of playing time Perry has been able to see, recording just the 7.3 minutes per match. In that time he has averaged 3.3 points and 2.1 rebounds, which is a 40-minute average of 18 points and 11.5 rebounds. Unfortunately for Perry, Fitts is also a Junior, so the tall Australian will need to find a way to grab more minutes, or for the pair to be able to play in the same side. When on court, Perry is a reliable shooter for a big, averaging 66.7 per cent from the field, and given he did not nail a three-point attempt, that average goes up to 76.9 per cent from two-point range – the most on his side by far. He is also 81.8 per cent from the line, so when a defender tries to stop him getting to the basket, he can be reliable to sink the free-throws.

Perry has already been named as an Emerging Boomer, and provides plenty of height close to the basket. He has experience in the Big V with Melbourne Tigers so if the center was to return in the future, no doubt Melbourne United would look to try and add the developing tall onto its list. While many might struggle in unfamiliar surroundings overseas, Perry is one of four Australians on the list, with Tanner Krebs, Alex Ducas and Kyle Bowen also with the Gaels. When basketball does return, hopefully Perry can grab some extra minutes and really stake his claim in his Senior year.