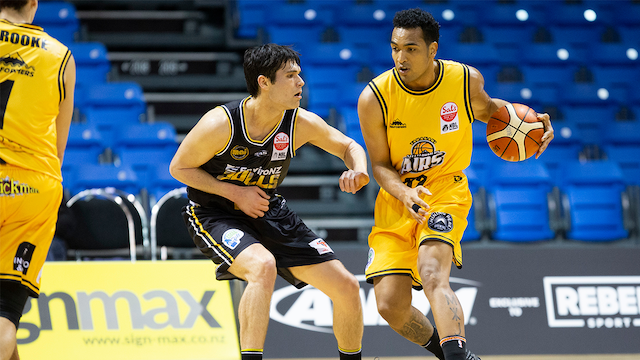 IN a clash of completely different styles, the Taranaki Mountainairs have defeated Franklin Bulls in a nine-point thriller to advance through to the 2020 Sal’s National Basketball League (NBL) semi-finals last night. In a seesawing contest the Airs were able to finish stronger, defeat the Bulls 99-90 and set their sights on a final four clash with Manawatu Jets tomorrow night.

There were not many better ways to start off finals week than to have Marcel Jones and Derone Raukawa be unveiled in the Sal’s NBL All-Star Five. That and to have the Airs – the best offence –  to face the Bulls – best defence – in a knockout elimination final.

In an attempt to control the rhythm of the game, the Airs came out with a 2-3 zone, an excellent strategy used to slow down play. So in order to combat this sluggishness, the Bulls tested their luck from deep, a lot. Safe to say the Airs’ coaching staff made the right choice as the Bulls came out cold, making just three of their first 14 shot attempts.

A timeout was called by the Bulls, but to no avail. The more the Bulls missed open threes, the colder they got and the less the Rams were inclined to give up paint position. When the Airs did find a way to force themselves in the paint, they were swarmed with five yellow jerseys cutting off all angles, hence forcing a kick out pass to a shooter on the perimeter.

Eventually Isaac Davidson drained a contested three – his first after three bricks – and the Airs saw their first slither of momentum. What preceded in the next 40 seconds however was truly remarkable. The Bulls stole the ball three times and snatched two offensive rebounds before they finally made a basket. That is five shots taken before the Airs could even leave half court, all resulting in a singular layup.

The Bulls ended the first down by only eight points. Which is not too bad considering they just shot two for 16 from three. But yet, the lack of aggressiveness that so badly inhibited their offence in the first, had now transferred all the way over to their defensive efforts, as they frequently allowed Bulls’ players to drive past them for easy layups. Simply put, the more the Bulls threw up ugly shots from three, the more the lead continued to grow. Hence, the greater the hill to climb for what is statistically the least impactful offence in the league.

This missing aggressiveness was only highlighted when the Bulls took their first free throws of the game with five and a half minutes left in the second.

But when you throw enough up, they have to start dropping soon and that is exactly what happened for Jackson Stubbins who hit back to back threes to shrink the deficit to three points. Slow close outs, clumsy passes and a technical foul put on Jones and the Bulls had officially climbed the hill, tying the game 40 apiece. Although the Airs were responsible for reeling them back in, they never allowed them to lead, ending the first half 50-48.

The Taranaki Mountainairs lost the privilege to say that as the Bulls saw their first lead of the game, with an ‘aggressive’ and-one from Dominique Kelman-Poto. One reason the Bulls kept within a fighting chance was for their work on the glass. Poor box-outs and lack of communication on behalf of the Airs had brought this once anaemic contest to a now fiery battle.

If the Bulls wanted to remain the leaders on the scoreboard, they would have to find an answer for Jones who seemed to have the hot hand all night, as he brought back the lead for his team. The Bulls tried to answer back with a missed three, then another, then another, all while Jones had hit his last three three-pointers. Within a blink of an eye, the Bulls went from breathtaking comeback to down by nine points… again.

The Bulls had already been on a 24-9 run, but with only 10 minutes on the clock, down by eight, the last quarter was not going to be easy. To do this, they needed to stay tight on the perimeter defensively and get a little lucky on offence. Funny enough, the Bulls started the quarter with suburb switching and smart help defence, forcing the Airs to put up an ugly shot before the Bulls splashed it in from three in transition.

More aggressive drive plays from Kelman-Poto and the Bulls were able to cut the deficit to four. But like with every time the Bulls fought the deficit, they fell right back down the hill. The Airs won the game 99-90, and now head off to the semi-finals to take on the Manawatu Jets.

The win was only possible on the back of some special players like Raukawa who finished the contest with 28 points, seven rebounds, three assists and three steals. Clearly Jones was motivated after being named in the All-Star Five as he left the ball game with 31 points while also securing 10 rebounds, seven assists and two blocks. Tai Wynyard (11 points, nine rebounds) came close to a double-double, whilst Shane Temara finished with eight points and seven rebounds in a solid effort. Coming off the bench for 15 minutes, Mitch Dance sank a couple of baskets and nailed his free throws to go at 100 per cent efficiency for six points and five rebounds.

The Taranaki Mountainairs take on the Manawatu Jets tonight at 7.30pm local time.