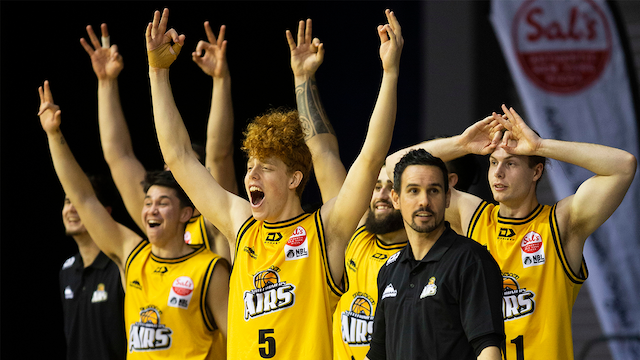 TARANAKI Mountainairs have kept their dreams of finishing in the top two of the 2020 Sal’s National Basketball League (NBL) Showdown alive after downing Nelson Giants by seven points last night. In what was a team effort – five players scored double-figure points – the Airs reached the hundred mark yet again in the 102-95 win.

Both teams were able to gets shots off early, but back-to-back threes by Thomas Ingham and Dane Brooks gave the Giants an early advantage. Denhym Brooke countered with a triple of his own for the Airs, and the big guns in Derone Raukawa, Mika Vukona and Mike Karena all got on the board with some points. Trailing by as much as six, the Airs drained three consecutive treys – one to Marcel Jones and two to Shane Temara – to hit the front themselves. They did not lose it again for the rest of the quarter as both teams share the points around.

The Airs long-range shooting was a huge feature of the opening term as the Giants looked to get as close to the basket as possible. The teams traded baskets in the last couple of minutes as Nic Trathen had a late triple to follow on from Mitchell Dance, but it would be Zach Easthope who had the last say with a layup as the clock ticked down to four seconds for Taranaki to lead by four at the first break.

The second term opened with Ken Tuffin scoring his first points of the game with a jump shot after missing his earlier three-point attempt, as the Giants kept in touch with the third placed Airs through another Trathen triple just two minutes into the game. Raukawa and Jones scored the next seven Airs points, but then their side went three minutes without scoring. Despite the long period, Nelson did not fare much better with a Karena driving layup a minute earlier the first time the Giants had been in front since midway through the first quarter.

The teams traded buckets in the second half of the term, as the Giants through Ingham and Karena built a handy lead. Temara scored five late points for his side to cut the deficit to three points by the main break. Having had a break later in the term, Raukawa returned to the court for the second half to try and spur his team on after conceding the lead in the second quarter.

Just nine seconds into the quarter and Tuffin got to the rim with a nice layup and Vukona fouled Jones on a three-point attempt to send the big man to the line which he duly delivered to give his side a two-point advantage. Vukona soon made up for his error with a two-pointer of his own, and the teams again traded passes. Josh Bloxham cleverly picked up a steal off a Raukawa pass and Karena fed the ball to Ingham for a triple to hit the front. No sooner had the Giants went ahead, and Raukawa quickly drained a triple of his own to give his team the advantage.

The Airs maintained that advantage throughout the term, as the Giants got as close as three points with 2:22 left in the quarter. However the last two baskets – to Raukawa and Tai Wynyard – extended the lead out to seven at the final change, with no score added in the last 74 seconds of the game as the Giants kept having chances but not nailing them. Four consecutive shots resulted in three offensive rebounds for Nelson, before Wynyard finally grabbed a defensive board, only for Jones to turn the ball over again. Not long after the siren sounded with the Airs up by seven.

Still within striking range, the Giants continued to push as Karena, Trathen and Ingham all scored early baskets. Temara produced an entertaining dunk, while Raukawa was still making life difficult for the opposition with his shooting. Midway through the term, the game was well and truly alive with the Giants drawing within a point on a number of occasions. Vukona capitalised off an and-one chance with two minutes and 43 seconds remaining and the scores 89-88 in favour of the Airs.

That seemed to wake the third placed team up a little as Jones and Brooks both contributed with jumpshots to push it out to six points and the Giants never got closer. Karena’s basket with 56 seconds on the clock put the Giants to within six, but then the deliberate fouling was on and the Airs made sure to get the ball in the hands of Raukawa who delivered from the charity stripe. An Ingham turnover in the last 38 seconds resulted in a Tuffin basket, and while Theo Johnson nailed a late triple, it was too little, too late for the Giants who went down 102-95.

Raukawa finished with a double-double of 15 points, 11 assists and two rebounds, while Jones picked up 23 points, eight rebounds and five assists in another big performance. Temara had 20 points and eight rebounds coming off the bench, while Dance (13 points) and Brooke (10 points, three rebounds) also reached double-figure points. For the Giants, Ingham top scored with 24 points, six rebounds and three assists, while Trathen came off the bench for 20 points of his own to accompany five rebounds, three assists and three steals. Karena (18 points, six rebounds and two assists) and Brooks (12 points, seven rebounds, two assists and two steals) both picked up double-figure numbers while Vukona aided his teammates well with five rebounds, three steals and two assists to go with eight points.

Taranaki takes on Franklin Bulls tomorrow in a must-win clash if the Airs are to secure a top two spot, while Nelson plays its final game on Saturday against Otago Nuggets knowing it is set for the first elimination final on Tuesday.