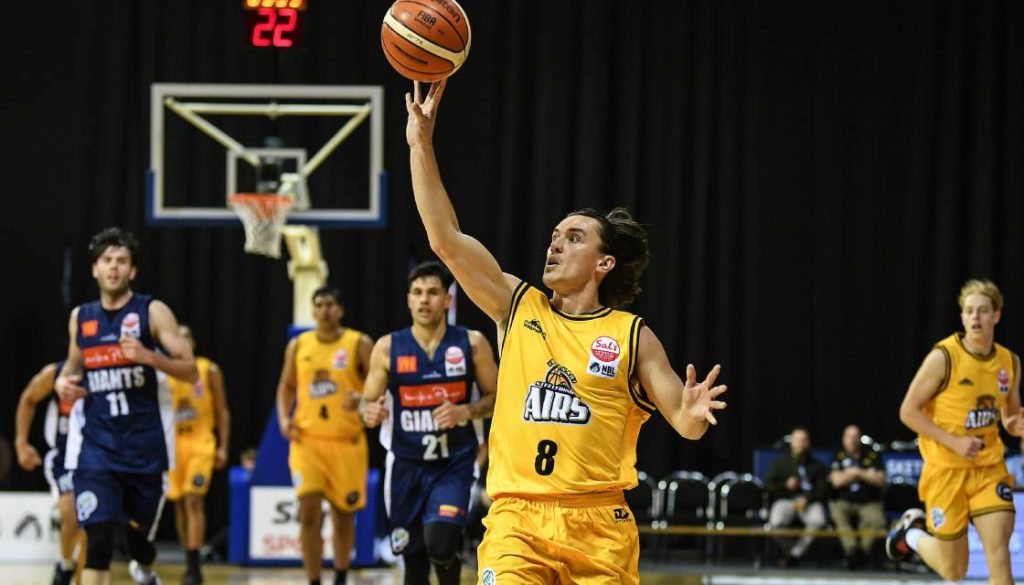 THE opening game of Sal’s National Basketball League (NBL) Showdown lived up to the hype, as both the Taranaki Mountainairs and Nelson Giants coming out with plenty of intensity and hunger from the first buzzer. Despite a couple of notable omissions, the Giants were unable to unlock their full potential but that did not seem to faze the Airs who exploited their opposition’s weakness with their scoring prowess. Despite tight first and fourth quarters, the Giants simply could not get within reaching distance of the Airs who capitalised on every opportunity that swung their way. In what was a high scoring affair, the Airs proved too good for the Giants, running out 16-point winners, (112-96).

Feeling each other out in the first term, the ball bobbled about with missed shots and wayward passes swinging across the court. Airs’ Tai Wynyard opened not only the account for the Taranaki Mountainairs but so too the overall competition as the forward converted on the layup. Injury struck early for the Giants with Thane O’Leary quickly leaving the court with a dislocated shoulder. It was not until the four-minute mark that the Giants hit the scoreboard thanks to a free throw shot from Nicolas Trathen. From then on the Giants seemed to find their mojo, thanks to Trathen knocking back a three-pointer and spurring his side on. It did not take long for Francis Mulvihill to get involved in the action for the Mountainairs with the late pick-up well and truly delivering. The Giants built momentum towards the latter half of the quarter with their ball movement and pressure down the court forcing steals and conversions. After leading for majority of the quarter, the Airs fell behind in the dying seconds as the Giants took a one-point lead heading into the first change.

The break paid dividends for the Airs, as Taranaki quickly getting into the rhythm of things and really kicking it up a notch, mounting a 30 to 23 points quarter showcasing just how dominant they could be on the scoreboard. Spearheaded by Mulvihill and Carlin Davison, the Airs found their groove both in offence and defence, gobbling up rebounds and finding the net with ease. As Mulvihill dished off dimes, captain Derone Raukawa led the way on the scoring front with his ability to drive to the basket and step back and sink them from beyond the arc. Although the Airs started to pull ahead the Giants hung on with everything they had largely in credit to Tysxun Aiolupotea and his strength across the court, hitting the scoreboard while Theo Johnson tried to inflict pain in defence with a couple of key rebounds. But it was to no avail as the Airs controlled the tempo of the game and held a commanding six-point lead.

The second half followed suit with the Airs not letting up on their pressure and constantly on the look out for attacking forays knocking back 28 points to 20 in what was another strong showing. They were unfazed by whatever the opposition threw at them; Marcel Jones a brick wall defensively racking up a wealth of big rebounds. Up the other end, Shane Temara proved to be a handful with his ability to sink them from everywhere and his athleticism. The Giants did not hit the scoreboard until there was just over six minutes left in the quarter, a true testament to the pressure the Airs were applying across the court. Thomas Ingham was a strong presence for the Giants throughout the third term, while Aiolupotea was once again up to the challenge.

A strong final term saw the Giants put out a more competitive and spirited performance, something the coach would have been pleased with, but unfortunately it was not enough to stop the steam roll that was the Airs. Their key players continued their dominant ways, finding access to the basket whether it be from long range or inside the arc, while making it hard for the Giants to generate any easy ball movement and scoring shots. Zachary Easthope, Mulvihill and Raukawa were impressive while Trathen and Ingham delivered for the Giants.

Raukawa stunned, notching up an impressive double-double thanks to his top points scoring effort with 28 and 10 assists. Teammate Mulvihill also starred with 16 points and five assists while Wynyard managed 13 points. Jones fell just short of a triple double with 13 points, 12 rebounds and seven assists. For the Giants Trathen top scored with 25 points and four rebounds while Aioluptoea managed 20 points and Ingham added 23 to his sides tally.

The Airs do not have to wait long for their second game, matching up against the Franklin Bulls tonight, whilst the Giants will face off against Otago Nuggets tomorrow.