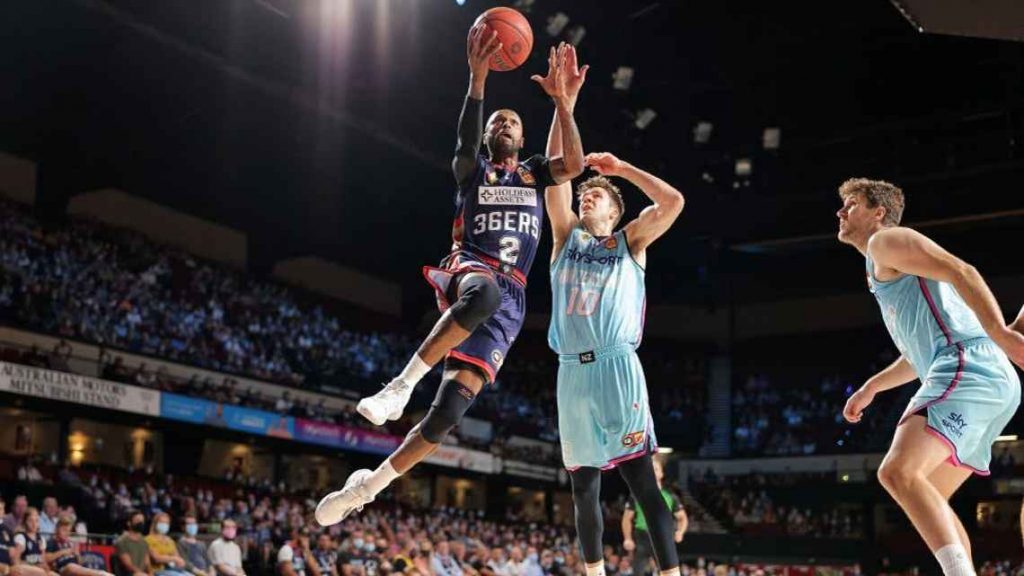 HAVING already played out a thriller earlier in the season the clash between Adelaide 36ers and New Zealand Breakers did not disappoint as Adelaide made it two from two boasting a 10-point win (88-78). The win marks the 36ers’ first consecutive victory so far this season after what has been an up and down campaign while it handed the Breakers their second straight loss to solidify them in last spot on the ladder.

The fast-starting Adelaide side all but set up the victory in the opening term skipping out to an eight-point lead and did not look like giving up that buffer despite the constant charges from the Breakers. Downing 21 points in the first quarter Adelaide kept that steady momentum in the second although they were outscored by one point (18-19). Up by seven points at the main change the 36ers came out with a real pep in their step in the third term to reassert themselves on their opposition and pile on the points.

Finding the rim with relative ease, the 36ers added to their total thanks to their 26 points while keeping New Zealand at an arm’s length. With Adelaide’s lead getting out to as much as 13 points in the early stages of the quarter, a final quarter flurry from the Breakers gifted them with a glimmer of hope cutting the margin to a mere five points midway through the term. But the experience and class of the 36ers shone through, putting the foot down to regain their composure and put the nail in the coffin with a couple of free throws and three pointers all but sealing the deal.

There was a major difference between field goal percentage with the 36ers converting at a 54 per cent clip thanks to their 32 made shots from 59 attempts while the Breakers sat at a lowly 41 per cent. Adelaide displayed their skillset and accuracy from range to nail 10 of their 22 attempts at 45 per cent as opposed to New Zealand who struggled to find their stroke at 31 per cent. Although the shooting statistics did not favour the New Zealand side they did flex their muscles when it came to rebounds dragging down 42,  seven more than their opponents.

Adelaide had the upper hand in a number of areas across the court, leading the way in assists (21-13), steals (8-5), blocks (5-20) and just narrowly edged out the Breakers on the turnover front with 11 compared to 12. Points in the paint was also a major discrepancy between the two sides with the 36ers finding a wealth of space inside, collecting 40 points compared to New Zealand’s 30.

Inspired by exciting duo Josh Giddey and Isaac Humphries Adelaide showcased that they could be a real threat when they get going and more importantly has given fans plenty to get excited about for the future. Giddey once again asserted himself on the competition dropping 13 points while also amassing 10 rebounds all of which were defensive and lead the side for assists with eight. Unfazed by the task at hand, Giddey continued to thrive under the pressure and live up to the lofty standards he has quickly become known for while Humphries also rose to the occasion with a game high 21 points to accompany his five rebounds, one assist and block. Daniel Johnson played a handy role in his 31 minutes on court collecting 17 points, four rebounds and five assists while Tony Crocker and Sunday Dech also chimed in with 14 and 11 points respectively to get their side over the line.

“This is the first game that we really kind of executed on both ends the way we felt like we could, somewhat of an identity that we’re forming and it was a really good win for the group,” Adelaide 36ers coach Conner Henry said post game.

Despite the loss there were still a number of key contributors for the Breakers with four players reaching double figure on the scoring front. Finn Delaney did not miss a beat for the Breakers, imposing himself and proving to be a handful on the points scoring front collecting a team-high 19 points along with five rebounds. Hot on his heels was Corey Webster with 17 points while Tai Webster also impressed amassing 15 points, five rebounds and seven assists in what was a strong showing for the guard. Colton Iversen had a day out recording a double-double thanks to his 12 points and 10 rebounds, six of which were defensive, but it was the absence of Lamar Patterson that had a major impact with the former Bullets star unable to find his rhythm, not sinking a single point in his 15 minutes of court time.