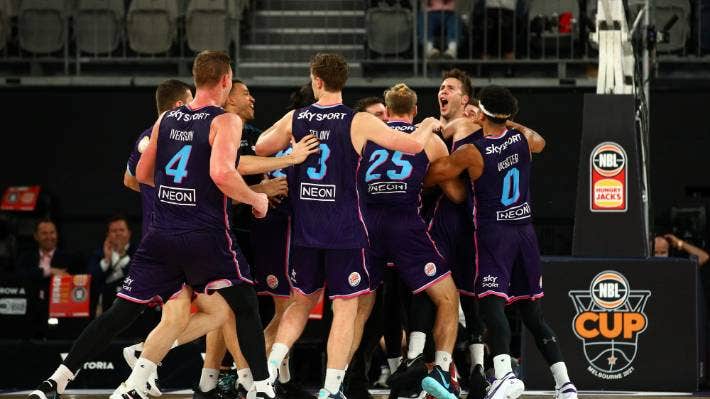 A BUZZER-beating triple from Tom Abercrombie gifted New Zealand Breakers the victory over Cairns Taipans in what was a heart-stopping encounter (76-73). Both sides were level in the final seconds of the game before Abercrombie stepped up to the plate and delivered one of the most emphatic wins of the season.

Flying out of the blocks in the opening term, the Breakers had a real pep in their step controlling the tempo of the game and most importantly dictating the terms of the game on a scoreboard. Establishing a handy 13-point lead off the bat in the first quarter the Breakers were humming as the Taipans searched for answers to quell the fast starting New Zealand side, a feat they have become quickly known for over the past couple of outings. The second quarter followed a similar suit with the Breakers extending the lead albeit by one point, thanks to some increased offensive pressure on behalf of Cairns to put up 21 points as opposed to their mere 13 in the first term.

Sensing a potential blowout with the buffer getting out to as much as 19 points despite the Breakers only using limited rotations given the number of injures and missing players,  the Taipans hit back in the second half. The North-Queensland based side, steadily started to turn the tables on their opponents and force them to work in overdrive with Mojave King taking the reins and dropping nine points in that quarter alone to spark a fightback. His influence was enough to spark his side into action as Cairns wasted no time chipping into their 14 point deficit and set up an enthralling final 15 minutes of basketball.

With everything to play for in the final term, it was a battle of passion and pride on the line as both sides have struggled for form all season. Holding the lead, New Zealand were not keen on giving it up, but were well and truly put through their paces thanks to an inspired Cairns outfit who were determined to clinch victory. With tiring bodies out on the court for the Breakers, the Taipans saw their chance and took it with both hands, as their three-point shooting came to life off the back of Scott Machado and Mirko Djeric making it a one point ball game.

Drawing level with a mere 40 seconds on the clock the ball lingered around the Breakers end and looked like the game was going to head into overtime. A missed shot from Tai Webster almost solidified this belief until Abercrombie did the unthinkable to secure the win. As if in slow motion the captain picked up the offensive rebound, tracked back to beyond the arc, twisted inside out and slammed home the match winning triple on the buzzer to clinch victory.

“It was obviously an awesome feeling, anytime that you can hit a game winner, not exactly how we drew up the last play. “I wasn’t paying attention in timeout and just had to make up for my mistake on that last play and try and pop it in,” Abercrombie said post-match.

“But I was lucky it kind of just floated towards me and I was able to catch it and let it fly. “I was a little bit worried I didn’t get it off in time but I got swamped pretty quick and didn’t have a chance to look up and check.”

Missing the likes of Rob Loe, Lamar Patterson and the late withdrawal of Corey Webster the Breakers dug deep to withstand the constant barrage from the Taipans and prevail in a thriller. It was arguably one of Abercrombie’s games of the season with the captain not only producing the winning shot but walking away with 20 points at 53 per cent, three rebounds and a block. Tai Webster proved to be a menace knocking back 16 points along with five rebounds and five assists but was costly with ball in hand coughing it up five times. Colton Iverson impressed with his double-double thanks to his 15 points and 11 rebound outing while both Finn Delany and Rasmus Dech recorded nine points apiece in the narrow win.

The reliable duo of Cameron Oliver and Machado were up to their usual tricks with the pair leading the way for the Taipans securing 19 and 14 points respectively. Oliver was slightly more accurate from the field sitting at 45 per cent and also amassed eight rebounds, in what was another strong showing for the forward while Machado got busy with ball in hand collecting six dimes and five rebounds. King plied his trade walking away with 12 points and five rebounds as Djeric finished with eight points, four rebounds and three assists.