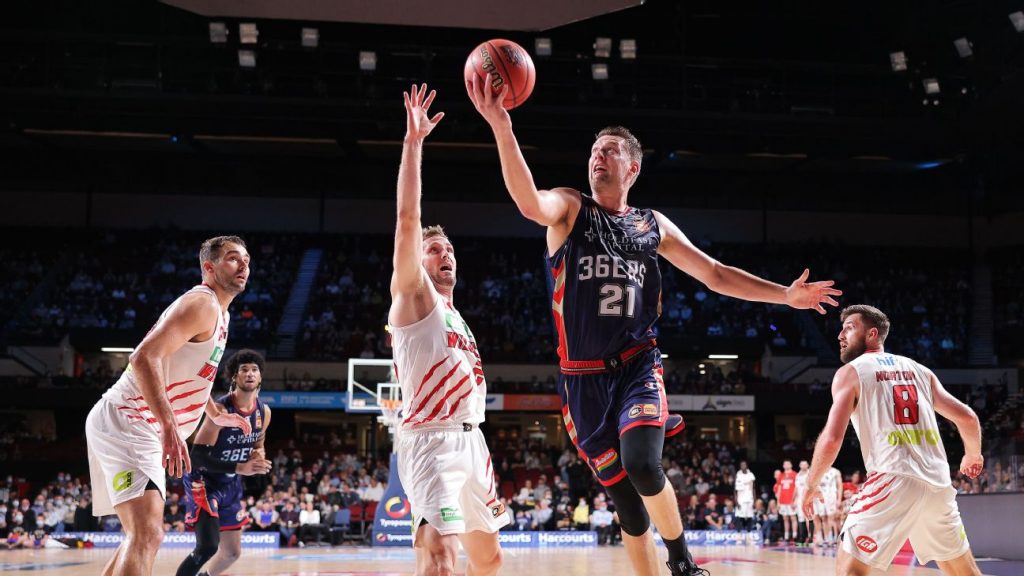 IT was as comprehensive four-quarter performance as it gets, with the Adelaide 36ers playing one of their best games of the season to produce a heavy hit to Perth Wildcats in a 15-point win at the Adelaide Entertainment Centre. The 36ers won 83-68 in front of more than 6000 people last night, winning all four quarters on their way to the impressive 15-point victory which saw four players hit double-figure points, and limit the influence of star Bryce Cotton.

The 36ers started off well to win the first term by four points, and then doubled that lead at the main break to sit 43-35 ahead at half-time. The home team kept pushing despite the Wildcats’ best efforts in a low-scoring third stanza, extending the lead out to double-digits at the final break. A stunning final term saw a reversal with the highest scoring term of the game, and more than double the combined points of the third quarter, to win the quarter 27-22 and secure the 83-68 victory.

Young gun Josh Giddey picked up a double-double of 13 points and 12 assists, as well as six rebounds, shooting at 50 per cent rom the field, including three of six from long-range. Daniel Johnson was unbelievable with his shooting, hardly missing form the field with a 78 per cent shooting efficiency – including seven of eight from two-point and four of six from three-point range – to end the night with 28 points, eight rebounds and two assists. Defensively Keanu Pinder contributed well with a massive four blocks to accompany four rebounds – three defensive – one steal, one assist and 12 points.

Other 36ers starters, Brandon Paul and Sunday Dech also had strong nights out in an even performance. Paul’s 50 per cent efficiency from the field saw him trump both Giddey and Johnson from long-range with five triples, though from 12 attempts, fishing with 20 points for the victors. Dech was not as on target with just one of seven from long-range and two of 13 in total for five points, but picked up 10 rebounds – seven defensive – and two assists. Jack McVeigh had the five points, four rebounds and two assists off the bench.

For the Wildcats, John Mooney was the clear best on court, racking up a massive double-double with 18 points and 14 rebounds – five offensive – as well as four assists and two steals in a complete performance. Todd Blanchfield also did some heavy lifting with 15 points, two rebounds and two assists, as Cotton was very un-Cotton like, draining just 10 points – three of 15 from the field and none of seven attempts from long-range – and picking up the two rebounds and two assists.

Jesse Wagstaff was the most prominent Wildcat off the bench with 11 points – three of five from long-range – six rebounds, two assists and two steals – from 21 minutes on court. Clint Steindl also stood tall with four rebounds and three steals to go with five points, though he did only manage two of nine from the field including one of six from three-point range. It was a disappointing night for the Wildcats, but it was bound to happen at some point after such a stunning run of form of late.

Perth Wildcats will now look to bounce back from the loss with a clash against New Zealand Breakers on the Apple Isle on Tuesday in what is as close as the Breakers will get to a home game this season. Adelaide 36ers make the trip north to Cairns for Round 14, when they clash on Wednesday night.