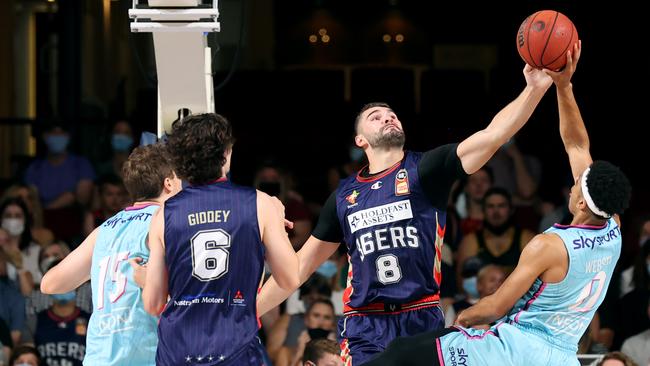 ADELAIDE 36ers are proving to be the masters of overtime games, winning their second National Basketball League (NBL) match in a week that went longer than the prescribed 40 minutes. In a topsy-turvy game, Adelaide outlasted New Zealand Breakers to win 94-91, including a 12-9 overtime period to secure the win. Boom recruit Lamar Patterson had a chance to level the scores with a buzzer-beating attempt, but missed and the home team took home the points in the entertaining encounter.

In a battle between a team playing its fourth game in just over a week and a team fresh off the longest off-season in NBL history, it showed with the 36ers immediately taking control in the first term. Piling on 29 points to 19, the crowd was up and about as the 36ers were making the most of their match fitness leading into the game.

A team with New Zealand’s quality was always going to hit back, and hit back they did, scoring 23-15 in the second quarter and cut the deficit to just two points at the main break, trailing 42-44. That momentum for the visiting side rolled into the second half, as the Breakers romped to a 28-18 quarter in a complete reversal of the first term and led by eight points with a quarter to play.

The match was still to have a few twists and turns however, as the 36ers managed to seize control, and with 10 seconds remaining in the fourth term, American import Donald Sloan made the triple to tie the scores. Both Patterson and Tai Webster missed chances at the death to win the match for the Breakers, and the game was sent into overtime.

That was as tight as one would expect, with the 36ers getting out to an 88-85 lead, only or Webster to drill the triple and cut the deficit again. Then through Daniel Johnson and Sloan, the 36ers went back out to a four-point advantage with just 26 seconds on the clock. A two-possession game was always going to be difficult to win back on their terms, but a vital triple from Patterson with 16 seconds on the clock made it just one point the difference.

A deliberate foul on Tony Crocker sent the import to the line with 11 seconds remaining in the game, and he made no mistake, putting the home team up by three again. Chewing up the clock, the Breakers had to make a move, and the ball landed in Patterson’s hands for the final shot of the day, but unfortunately for the visiting side, it would miss, and the three-point difference would stand and the 36ers get up in a thrilling contest.

The teams were fairly evenly matched in terms of their shooting percentages, though Adelaide was a lot more clinical from outside the arc (nine of 22) compared to the Breakers who had plenty of attempts for a lower percentage (13 of 39). The 36ers also made more of their trips to the charity stripe than in their loss to the South East Melbourne Phoenix, scoring 25 of 30 at 83 per cent efficiency, compared to the Breakers’ 10 of 16.

Adelaide had seven more rebounds, two more steals and three more blocks, whilst capitalising off the offensive boards with 17 second chance points to nine. The 36ers output off the bench was much better with 29 points to 10, largely thanks to Sloan who was an influence having started there due to the return of Josh Giddey.

Sloan finished with 20 points and three assists, but it was Isaac Humphries who continued his red-hot form with 24 points – at 73 per cent efficiency from the field – 11 rebounds, five blocks and two steals in a dominant night out. Johnson picked up 16 points – shooting just two of 11 from the field, also recording eight rebounds and three assists. Sunday Dech (10 points, nine rebounds and three steals) and Crocker (11 points, three rebounds) both hit double-figure points.

Giddey had a quieter return from injury with just four points, five rebounds and two assists in 20 minutes of action, as Tai Webster well and truly won the battle of the back court. The star guard was talked up by his brother Corey in the lead-up to the match believing Tai could “eat him up”. Webster did just that, racking up a match-high 34 points, as well as seven rebounds and six assists in a Most Valuable Player (MVP) award despite the loss.

The starters shared the points around for the breakers with Patterson (16 points, five rebounds, two assists and two steals) having some big moments, but also picking up seven turnovers, while Finn Delany had 16 points, nine rebounds and two blocks. Tom Abercrombie managed 11 points and four rebounds in the loss, while Rob Loe started and played 32 minutes but was overshadowed by Humphries, finishing with four points, three rebounds and two steals. Danish-Australian talent Rasmus Bach had six points and two rebounds on debut coming off the bench.

Both teams will take plenty out of the contest and will not have to wait long for a rematch, as Adelaide and New Zealand go head-to-head on Wednesday back at the Adelaide Entertainment Centre.