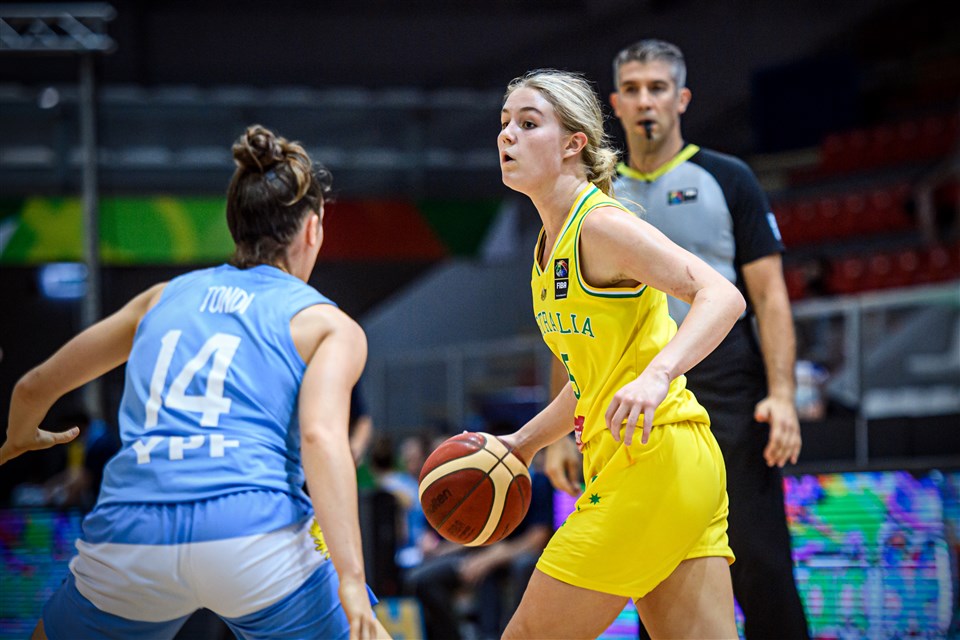 THE Round of 16 got underway at the Under 19s Women’s World Cup with a mixed bag of results. The winners progressed through to the quarter finals with Australia and the US claiming some huge wins in their respective clashes while Canada stunned the unbeaten France.

Spain got the job done against Japan claiming a handy seven-point victory to progress through to the quarterfinals. The Spaniards opened up a two-point lead at quarter time before Japan flipped the script in the second to hold the ascendancy at half time and further stamped their or authority on the contest with a 19 to 17 points quarter. But Spain was not done with yet as they dug deep in the final quarter keeping Japan to just seven points to muster up the win.

Elena Buendavida Estevez led the charge for Spain producing 16 points, five rebounds and two assists in the win while teammate Marta Morales Romero was hot on her heels with nine points, two rebounds and two assists. Marta Suarez Rodriguez had an influence on the scoreboard and on the rebounding front with seven and 11 respectively. Yua Emura worked in overdrive for Japan finishing with a game-high 20 points as Maho Hayashi collected 11 points and four rebounds in the loss.

Mali flexed their muscles against Korea claiming a dominant win to keep their hot form going. After an even start to the game with both teams sitting on 15 points apiece the game opened up in the second quarter thanks to some increased offensive action from Mali. After half-time Korea was only able to add 15 points to their total while Mali added an extra 48 points showcasing their dominance.

Yeyeong Shin was the dominant scorer for Korea collecting 14 points, eight rebounds and three assists in her 28 minutes of court time. Haeran Lee also plied her trade registering 13 points and three rebounds. Sika Kone picked up where she left off with another imposing performance amassing 19 points and 13 rebounds while Maimouna Haidara also chimed in with 17 points and 11 rebounds. Kamite Elisabeth Dabou was strong once again with her 11 points and seven rebounds while Aminata Brahima Sangare pulled in 11 rebounds, eight of which were defensive.

He was a nail-biting finish between France and Canada with the latter just scraping home with a narrow seven-point victory. Canada burst out of the blocks in the opening quarter piling on 20 points while France managed just the 12. But they flipped the script in the second quarter, with France coming out with a real pep in their step heading into half-time with a handy buffer. Canada once again fought back in the second half and did enough to maintain the ascendancy to claim the win.

Louise Bussiere impressed for France with her 16 points, four rebounds and seven assists while Pauline Astier drained 13 points shooting at 50 per cent from the field. Sara Roumy was the only other player to venture out of single digits slotting 11 points while Oumou Diarisso walked away with 11 rebounds. For Canada it was Rebecca Demeke that stole the show producing 19 points in just 21 minutes of action. Tara Wallack was not far off the pace with her 16 points and seven rebounds as Lemyah Hylton slotted 14 points and four rebounds in the win.

The Czech Republic reigns supreme by 10 points against Brazil in the clash. Holding the lead at quarter time by a mere point things continued to intensify in the second quarter with both sides slotting 19 points apiece. The game blew open in the third as the Czech Republic added 21 points, while Brazil only manage 11 and while they worked their way back into the fight in the final quarter it was too little, too late.

Raiane Dias do Santos was the topscorer for Brazil finishing with 19 points to her name and six rebounds, while Maisa Pereira also found her groove slotting 12 points albeit at a lowly 39 per cent. Maiara Pereira also worked hard for her 10 points, five rebounds and four assists. There was no stopping Katerina Zeithammerova and Petra Malikova with the pair posting 15 points apiece with the latter also registering nine rebounds. Matrina Pokorna and Valentyna Kadlecova  also played their part with 12 points each in the win, as Dominica Paurova finished with a double-double thanks to her 11 points and 10 rebounds.

Team USA pumped Chinese Taipei in a convincing performance thanks to a blockbuster third term. The US asserted their dominance from the opening buzzer creating a 24 point lead to kick start proceedings. That momentum continued into the second quarter while the third was a spectacle of attacking forays credit to their 40 points while keeping Chinese Taipei to just five. The last quarter was the final nail in the coffin as USA progressed through to the next stage.

Every player on the roster managed to hit the scoreboard, but it was Payton Verhulst who topped the table thanks to her 18 points at 62 per cent from the field. She also managed eight rebounds and six assists in the win. Te-Hina Paopao was also in fine form for her 16 points and eight rebounds, as Sania Feagin just fell short of a double-double thanks to her 14 points and nine rebounds. Lauren Betts was solid with her 14 points as was Diamond Johnson. For Chinese Taipei it was Shu Chun Tang that did the heavy lifting draining 12 points and three assists as Yu Chieh Chen was the next best with eight.

Hungary pipped Italy at the post claiming a six-point win in what was a seesawing battle. Hungary made all of the front running in the first quarter establishing a six point lead and extended that buffer at half time to nine points. But Italy were not about to lie down heading back in the third to reduce the margin to four at the final change but it was too little too late as Hungary did enough to hold on for the win.

Both Giulia Natali and Ilaria Panzera managed 14 points apiece for Italy with the latter reeling in eight rebounds and six assists. Giorgia Bovenzi worked hard in her 34 minutes of court time slotting seven points and three assists. The number 13 proved to be the magic number for Eszter Madar and Reka Dombai as the two slotted 13 points apiece in the win while Madar also registered eight rebounds. Julia Boros got busy with her 10 points and four rebounds.

Russia stamped their authority against Egypt running out with a 30 point win. Russia won every quarter bother lost highlighting its dominance from the opening whistle. Only five points separated the two teams at quarter time before Russia put the foot down in the second and continued that trajectory in the third credit to a 29 to 11 points term.

Sandy Abdellatif was the most prominent scorer out on court for Egypt producing 14 points at 67 per cent from the field while also collecting six rebounds and one steal. Teammate, Fatma Kabil was also in fine form registering 12 points and three rebounds as Hala Yassine worked in overdrive for her nine points and five assists. Olesia Tumanova showcased her firepower for Russia draining 18 points in just 15 minutes of play while Olariri Kosu imposed herself thanks to her 16 points and 14 rebounds.

The final game of the day saw Australia defeat Argentina by 31 points in what was a one-sided affair. Australia left nothing to chance in the opening term, piling on a whopping 23 points to just five and kept that momentum going into the second. Although Argentina wrestled back the flow in the third, the Aussies once again dug deep to get the game back on their terms and romp home the win.

Nyadiew Puoch was a force to be reckoned with off the bench draining a team-high 15 points while also accumulating five rebounds and three steals. Kate Deeble was also influential on the scoreboard with her 13 points while Shanice Swain worked tirelessly racking up 11 points, six rebounds, two assists and one steal. Magali Vilches was the topscorer for Argentina producing 10 points while Agustina Marin was the next closest with six.