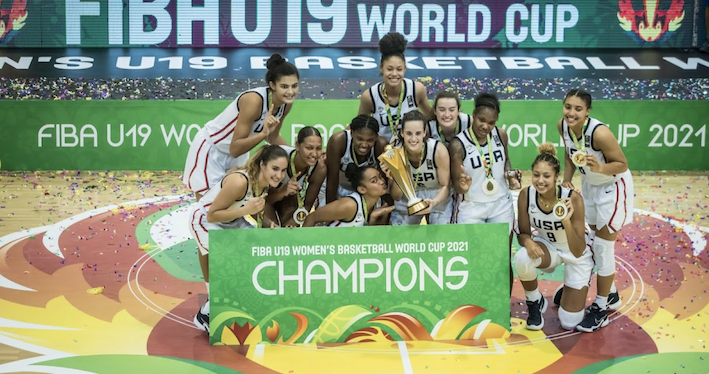 THE Under 19 Women’s Basketball World Cup finals are done and dusted with USA claiming their ninth title downing Australia in an epic throwdown, while Hungary secured third spot with their win over Mali.

It was always going to be a tough battle for Australia who were coming up against an undefeated United States side and it was exactly that, as America stormed home with an 18-point victory. The win marks their ninth title and back-to-back wins at the Under 19s World Cup with the side winning each and every quarter and not relenting on their pressure throughout the contest.

The United Stares skipped out to a handy four-point lead at quarter time with Diamond Johnson leading the way for her side. that momentum trickled into the second quarter with the United States piling on 18 points while Australia could only manage the 14 going into half-time down by eight. Unfortunately it did not get any better in the third for the green and gold as the Americans found another gear to kick into, dictating the play in both attack and defence. With the game all but decided Australia worked in overdrive to keep within striking distance but it was too little too late as America slammed the door shut on another successful World Cup campaign.

Johnson seemed to have the ball on a string for the US racking up a team-high 15 points shooting at 60 per cent from the field. She was impressive from beyond the arc nailing three triples while she also managed two steals. Te-Hina Paopao was hot on her heels with 10 points, four rebounds – all of which were defensive – five assists and two steals. Lauren Betts proved to be an imposing figure with her nine points and 14 rebounds as Caitlin Clark chimed in across all areas of the court with nine points, eight rebounds and eight assists. Sonia Citron also had her time to shine producing 10 points and five rebounds in the win.

For Australia it was Kate Deeble that led the troops with her 13 points, two rebounds and two assists. She also shot at 40 per cent from the field, including three triples, while Olivia Pollerd was not far off the pace sinking nine points and one rebound. Although Jade Melbourne was down on her lofty standards with just the seven points to her name in her 36 minutes on court, she still managed five rebounds and four assists. Chyra Evans also worked in overdrive for eight points and three rebounds but it was not enough to get Australia over the line.

Hungary pulled out all the stops to collect the win over Mali and secure third spot at the Under 19 World Cup. They led from the opening quarter, coming out with a real point to prove and did not let up in attack or defence to really stamp their authority on the competition.

Although Mali were the first to make a move and hit the scoreboard, Hungary hit back as the game went on to control possession and play with a real sense of confidence. By quarter time Hungary established a handy four point lead, able to withstand everything Mali threw at them despite the lead chopping and changing. Hungary really cranked things up in the second quarter pouring on 24 points to just 17 to go into half time with a pep in their step. The third term was much tighter as Mali upped the ante in defence, not allowing Hungary as much free rein as they did in the first half. But that was short-lived as Hungary came out with a fire in the belly in the final term, piling on 26 points to 18.

It was hard to go past the services of Julia Boros who topscored with an impressive 25 points, shooting at 50 per cent from the field. She had no problems from scoring from beyond the arc slotting five from 11 while she also registered six rebounds and three assists in the win. Reka Dombai was also in good touch draining 18 points, six rebounds and six assists while Lili Krasovec chimed in with 10 points, six rebound and one assist.

For Mali it was Sika Kone that starred, piling on 25 points at 65 per cent from the field. It did not stop there for Kone as she also dragged down a whopping 16 rebounds proving to be a real threat especially in attack with nine offensive rebounds. Aminata Brahima Sangare chimed in with a handy 15 points, seven rebounds and two assists while both Diarrah Issa Sissoko and Kamite Elisabeth Dabou managed eight points apiece in the loss.

In the other final result, Argentina claimed victory over Brazil, while Korea flexed their muscles over Chinese Taipei. Russia were defeated by Spain while Italy recorded a 14-point win over Egypt. Canada got the job done against the Czech Republic while Japan just snuck home with a six-point win over France.