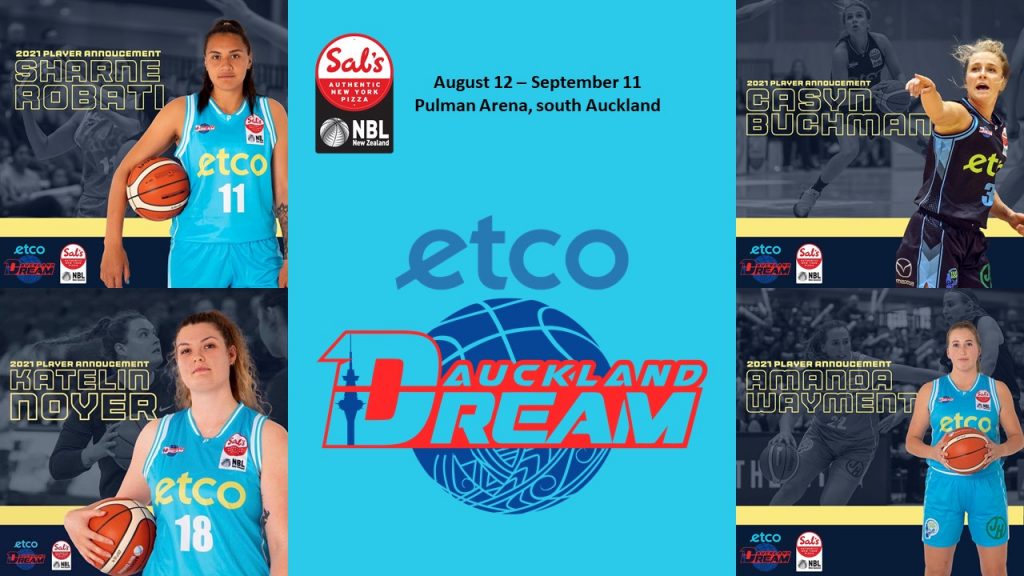 THE 2021 Sal’s New Zealand National Basketball League season is right around the corner with 33 games to be played across five action-packed weeks. As we look forward to the first tip-off, Draft Central will be previewing each of the six teams competing for championship glory, continuing with the Auckland Dream.

The Dream will be looking to get back into the finals hunt after they narrowly missed out on the top four last season as defending champions from 2019. A busy off-season has seen Aik Ho’s side make plenty of good moves in the lead up to the 2021 campaign.

Roster signings have been flowing, with some great players returning to the club, alongside a couple of fresh faces to boost the squad. A big signing is that of Esra McGoldrick, who joins the club after being one of the key members of a Wizards team who made last season’s grand final.

The experienced Casyn Buchman also returns to the team, alongside last season’s top point scorer Sharne Robati. Savannah Cook, Olivia Berry, Amanda Wayment, Katelin Noyer, Darci Finnigan and Jelena Vucinic are all back for another season with the Dream, while Milomilo Nanai is also a part of this season’s roster after giving birth to her first child.

Another addition is Fraser High School Student Aria Cowley, who is an exciting prospect for Dream fans to look forward to. Playing as guard, she is one of the country’s most promising players, and her skills were on show during the 3×3 Secondary School Championships in March, as she used the pick and roll to great effect to showcase her talents as a scorer on both the inside and outside.

As with all clubs, the Dream will be aiming to give it their all on the court in the hope of winning enough games to reach the semi-finals, however Auckland has emphasised its community approach as a primary focus on their club webpage.

“The vision of the Dream organisation is to inspire and engage more young women to achieve great things through their love of basketball.”

With multiple star players in their line-up and a significant agreement between the league and Sky Sport to broadcast all matches, the chance for the Dream to inspire young women is greater than ever before.

The team should be potent on both ends of the court this season, with the addition of McGoldrick now meaning they boast three of last season’s top 10 league scorers. Robati led all comers averaging 16.4 points, while Buchman (11.2 points per game), and now McGoldrick (15.4 points per game) were also prominent offensively. The Dream were ranked third in scoring last season, averaging 63 points a match, and were the number one side from beyond the arc with an average of 6.6 three-pointers made.

Defensively, the team is in good shape with McGoldrick also a standout rim protector last year, averaging 3.5 blocks per game, which was more than the Dream’s team average of 3.0 (ranked fifth). McGoldrick and Wayment (who averaged two blocks herself) will make scoring around the basket a difficult task for opposition teams.

Auckland will certainly be in the mix come the last round of the season, and if they can find their style early on, they will be a force to be reckoned with.

The Dream will play in the first match of the season on Thursday evening facing last year’s Grand Finalists Waikato, before they do battle with reigning champions Harbour Breeze on Saturday and finish off a busy round one schedule against the Wildcats on Sunday.