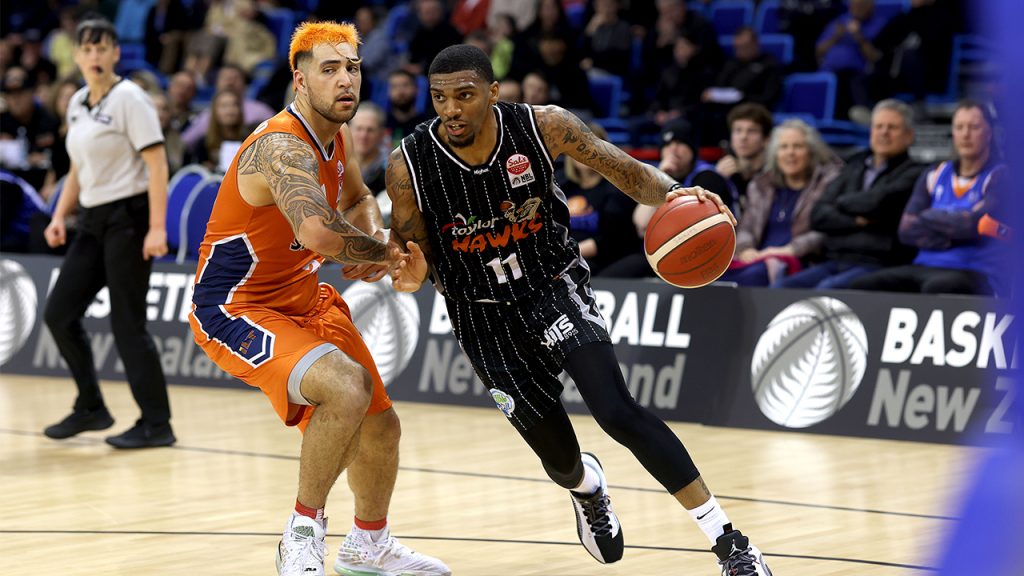 IN the wake of the New Zealand National Basketball League (NZNBL) coming to a close over the weekend, Draft Central will run through each of the 10 competing sides to look at the key stats and players of the 2021 season. The series continues with Hawkes Bay Hawks.

A shooting machine, Walker was a sensational and reliable player throughout the 2021 NZNBL Grand Final, putting up 21.6 points, 5.0 rebounds, 3.8 assists and 1.7 steals throughout the year. Walker led his team in points, and was second in both assists and steals, showcasing his ball-handling skills. Nailing 70 of his 164 three-point attempts, the long-range shooter averaged 42.7 per cent from beyond the arc, always dangerous when lining up for the jumper. When he did occasionally get to the free throw line, he converted 84.6 per cent of the time. Walker put up double-digits in all bar two games he was on court, and amassed 20-plus scores in 11 games. In his last three outings, Walker had his most prolific games of the year – two of which were finals – in his final three matches to put up an average of 33 points and six rebounds across the three games.

The well-balanced talent had another strong season backing up his 2020 year by leading his team in rebounds (8.1), assists (4.0) and steals (2.1), being the key facilitator for the Sharks like he was for the Jets last season. Again Harris fell short of a premiership medal, finishing runner-up for the second consecutive season, but he did everything he could during the year. He shot at 55.4 per cent from the field, and whilst his free throw shooting was down (just 66.7 per cent efficiency), he was still able to contribute across the court. Harris ended the year with 12 double-digit points games, including a run of five consecutive matches mid-season. His two finals saw outings of 19 and 22 points, both being double-doubles. In total, Harris managed six double-doubles, and stepped up when needed.

The ever-reliable Rusbatch played all bar one game, and started in each of them, averaging 16.8 points per match to be second in his team behind Walker. He also managed the 4.2 rebounds, 1.6 assists and 1.1 steals. Rusbatch shot at a high 38.7 per cent from long-range to combine well with Walker from beyond the arc, and he managed an 81.8 per cent efficiency when he got to the charity stripe. His consistency was remarkable, with a run of 15 consecutive games in double-digits. Unfortunately his grand final (four points) was a quiet one, but overall he contributed to the team with seven rebounds. At one point in the season he had a five-game streak of 20 or more points, with his season high of 36 coming against Otago Nuggets on June 12, with a whooping nine of 15 triples in that game.

Whilst Vague played a few less games than the others (16, including 15 starting), he still did his part off the boards to be second overall behind Harris in rebounds (7.0), and fifth overall for points (12.0). He played his role each and every week, and shot at 36.8 per cent from outside the arc and 48.6 per cent overall, though support off the boards was his main job. When he got to the line, Vague hit three quarters of his free throws to be a reliable option there. Of his 16 games, 10 were in double-figure points, and he had the one double-double against Manawatu Jets on June 20, when he picked up 11 points and 12 rebounds, though he had an outlying 25-point game (the only match about 20 points) along with eight rebounds and five assists, against Otago Nuggets on June 12, dominating with Rusbatch.

The Hawkes Bay Hawks came within a basket of winning the overall prize, having the better of the Wellington Saints midway through the 2021 NZNBL Grand Final, but could ultimately not finish the job. Nonetheless they can be proud with their efforts after not dropping a game at home all season.