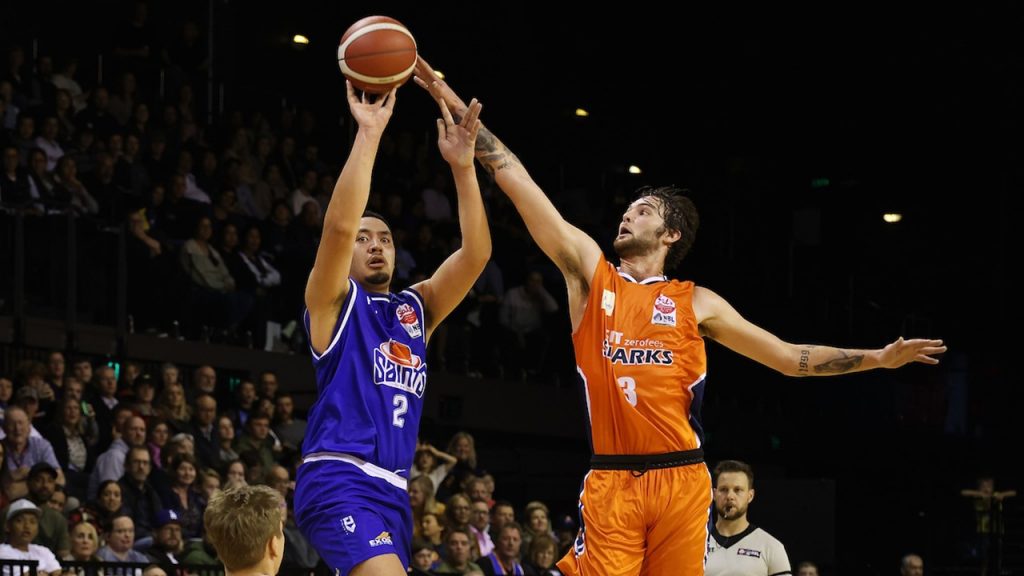 THE mid-table logjam of the New Zealand National Basketball League (NZNBL) is likely to be broken up after Round 3 of competition, with some ladder-defining clashes having the potential to separate the contenders from the pretenders.

Opening up Round 3 of NZNBL action is the undefeated Auckland Huskies looking for their fourth straight win, this time on the road against a Canterbury Rams outfit starting to gel. The Rams won their last encounter after back-to-back losses, and will look to make it two on the trot in what will be their only game of the weekend. The Huskies will need to back up just under 48 hours later when they take on the Southland Sharks, so will look to grab some momentum in this match. The undefeated Huskies have been led sensationally by Jeremy Kendle who is averaging 28.3 points, 6.0 assists, 4.3 rebounds and 1.3 steals to be among the best players in the competition. Throw in a debut from Chris Johnson (30 points, 12 rebounds, two assists and one block) and teenage star Dontae Nance (15.3 points, 3.0 rebounds) and the Huskies have quite the formidable line-up. The Rams have had an even spread across the board led by EJ Singler (14.0 points, 7.0 rebounds, 4.7 assists and 1.0 steals), while Daishon Taylor (16.3 points, 3.7 rebounds, 5.3 assists and 2.3 steals) and Jack Salt (14.5 points. 7.0 rebounds, 2.0 assists, 1.5 steals and 1.0 blocks) have been consistent across multiple aspects on court.

Turning the attention to the other Friday night clash two mid-table teams go head-to-head in the Franklin Bulls and Southland Sharks. Both sides are poised at 2-2 from four games this season, with the Bulls coming off a loss and the Sharks having dropped their past two games after winning their first two. They will look to arrest that mini-slide in this one, playing their fourth away game out of five for the season, whilst the Bulls are playing their fourth home game. Josh Selby is leading the Most Valuable Player (MVP) voting having put up 30.8 points, 6.3 rebounds, 4.5 assists and 2.5 steals in season 2021. He has worked well in tandem with Zane Waterman (24.0 points, 14.7 rebounds, 2.3 assists and 1.0 blocks), while Joseph Nunag has come off the bench to contribute 14.3 points per game. The Sharks have a well-balanced unit, with Josh Cunningham (13.8 points, 8.0 rebounds and 1.3 steals) and Dom Kelman-Poto (11.8 points, 7.0 rebound, 3.0 assists and 1.3 steals) teaming up well off the boards while Alonzo Burton has managed the 12.0 points and 2.3 steals per game in the front court.

After four straight losses, Manawatu Jets will be hoping something has to give against the Otago Nuggets, having been relatively competitive in most of their clashes. The Jets are 0-4, but are playing their first home game of the season which might spark a revival, especially considering the Nuggets are yet to hit the road in season 2021. The reigning premiers lost their opening game of the season to the Wellington Saints, but have since strung together a couple of victories and will be going for win number three here. Despite the winless start, the Jets have had some shining lights, with back court players Daishon Knight (26.5 points, 4.0 rebounds, 3.5 assists and 3.0 steals) and Jayden Bezzant (21.8 points, 4.3 rebounds and 2.5 assists) having impressive shooting starts, while forward Shane Temara is averaging a double-double of 14.8 points and 12.0 rebounds. For the Nuggets, Isaiah Moss (17.7 points, 4.3 rebounds and 1.3 steals) has been an impressive import, whilst Sam Timmins (13.7 points, 6.3 rebounds and 3.3 assists) has shouldered the rebounding load, for Josh Aitcheson to assist (8.0 points, 2.0 rebounds) in the scoring.

Much like Auckland Huskies, the Wellington Saints will be eyeing off a fourth straight win, and appear to be the team to beat. Much like most of the past decade, the Saints have set a ripping pace to start the season, whilst the Nelson Giants have begun a bit up and down, with one win from two games. At home, the Saints have won both their clashes and all up have a points differential of plus-75, whilst the Giants have been relatively even with minus-nine and are 1-1 on the road. The Saints do not have to worry about another game, whilst the Giants play the next day so will look to manage the roster. Dion Prewster is in MVP contention with a roaring start to the season putting up 28.0 points, 5.7 rebounds, 5.0 assists and 1.7 steals per game. He is one of five players to average double-figure points, with Kerwin Roach (17.7 points, 5.0 assists, 3.7 rebounds and 2.3 steals) and Romaro Gill (10.3 points, 6.0 rebounds, 1.0 steals and 1.3 blocks) among the other top performers in the top of the table side. Two Americans in Hunter Hale (22.0 points, 6.0 rebounds, 4.7 assists and 2.3 steals) and Donte Ingram (20.7 points, 8.0 rebounds and 3.0 assists) have lit up the NZNBL to-date, whilst Sam Dempster has provide good support off the boards with 6.7 points and 7.3 rebounds.

Having both played previously, Huskies and Sharks will be rotating players heavily in this one. The Huskies have had some fights along the way to their three victories, and the Sharks will be expecting to provide another one here, while the visitors will hope to end the round with a 4-2 record, and right back up with the top contenders in the league.

Coming in for their first game of Round 3, Hawke’s Bay Hawks will have been well prepared to take on a Nelson Giants outfit that played the night before. Fully rested from the week, the Hawks will be favoured to extend their win-loss record to 3-0, whilst the Giants have the tough ask of trying to knock off two unbeaten sides back-to-back or else slip to the unwanted record of 1-4 early in the season. In previewing the Hawks line-up, Jonathan Janssen has been the versatile power forward with 11.5 points, 12.0 rebounds, 2.5 assists and 1.0 steals per game, whilst players with ANBL experience, Hyrum Harris (13.5 points, 7.5 rebounds and 2.0 assists) and Devondrick Walker (21.0 points, 3.5 rebounds, 3.0 assists and 1.5 steals) have certainly started strongly.

The Nuggets will have no fears of the road after this round, playing a second consecutive away game for Round 3. After taking on the Manawatu Jets away, the reigning premiers head to TSB Stadium to face the Taranaki Mountainairs, of whom are in the bottom two like the Jets. The Airs will be desperate to get a win on the board before slipping to 0-4, whilst the Nuggets can really assert themselves as a chance to go back-to-back with victories over the bottom two sides. Marcel Jones has been a lone hand for the Airs this season, averaging a double-double of 22.7 points, 10.0 rebounds, 3.3 assists and 1.3 blocks. Francis Mulvihill (9.7 points, 3.3 rebounds, 3.7 assists and 1.3 steals) and Haize Walker (9.3 points, 4.7 rebounds and 3.7 assists) have been the other two players to start every game and contribute to the Airs’ cause.