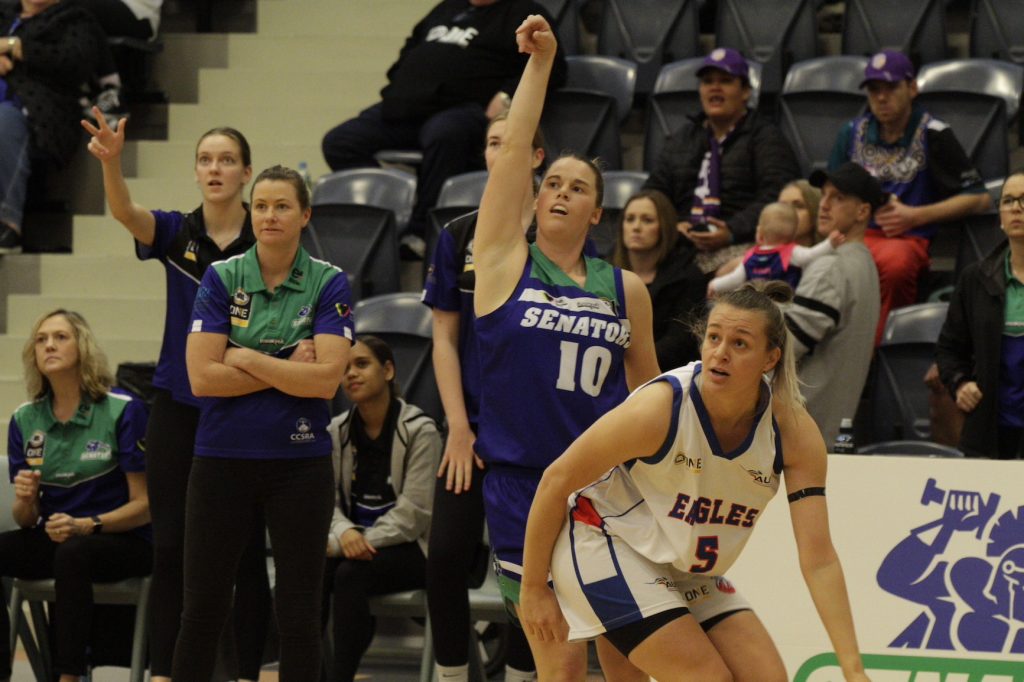 ROUND 17 of the National Basketball League (NBL)1 West continued over the weekend with a number of exciting clashes headlining the round in both the men’s and women’s competitions.

Joondalup Wolves claimed an almighty win against Cockburn Cougars albeit by a mere point (84-83). It was neck and neck from the opening jump-ball signalling just how hotly contested this game was going to be with neither side willing to give any breathing room but in the end it was the Wolves that hung on ever so slightly.

It was a blistering first quarter of action with both sides highlighting their intentions nice and early. The Cougars opened their accounts with a triple off the hands of Seva Chan before Lochlan Cummings made his presence felt for the Wolves. This blow for blow style of attack create plenty of intrigue with the Cougars proving more than happy to back themselves from range while the Wolves just plugged away to keep within striking distance. The lead pushed out to as many as eight points in favour of Cockburn midway through the term with Nicolas Pozoglou proving to be an imposing figure especially from deep. But the cogs started to steadily tick over for Joondalup as they got their rhythm flowing in attack and ate into the deficit. Although the Cougars kept their noses in front, the Wolves were coming and finished the last term with a real spring in their step to level the scores at 24 points apiece thanks.

A fast start to the second term gave the Wolves the upper hand and while the Cougars were able to continuously apply pressure they could not steal back the lead despite the two sides trading baskets back and forth. Every time the Cougars came close the Wolves were able to put the foot down to hold onto the narrow three point buffer they established in the opening stages of the quarter. Joondalup stamped their authority nice and early to create a five point lead in what was a slightly lower scoring third quarter with both teams only managing 16 and 17 points respectively as Cockburn went into three quarter time down by two points.

With the game on the line Jonathan Wade announced himself to create a four-point lead early in the piece. The Wolves started to gain some real momentum but the Cougars refused to just lay down as they too worked their way back into the contest, fighting tooth and nail for every possession. With just under six minutes to play in the game scores were tied before the Wolves found a way to grind out the game and secure victory.

Cummings led the charge for Joondalup producing 27 points at 43 per cent from the field. He was not overly accurate from beyond the arc only managing three from eight attempts but starred off the boards with a whopping 13 defensive rebounds and five assists. Wade also played a strong role with his 22 points going at 55 per cent accuracy from the field. Mitchell Newton also found his stroke for the Wolves finishing with 14 points and five rebounds to his name.

For Cockburn, Gavin Field was the most dominant shooter out on court sinking 25 points with his proficiency from down town a main talking point thanks to his seven triples from 14 attempts. Pozoglou was the next best with 23 points and a whopping 17 rebounds of which 13 were defensive while he also collected six assists. Chan was solid with his 16 points as Jaarod Holmes chimed in with a handy 13 points but was not enough to claim the win.

The closest game of the round was between East Perth Eagles and Warwick Senators with the latter just getting over the line by six points to continue their run of hot form (89-95). The Eagles have been up and down in their past five outings while the Senators have hit their straps at the right time notching up their sixth straight win.

The Senators asserted their dominance in the early stages of the game creating a five point lead in the first minute of action. Although it did not take long for the Eagles to find their rhythm they simply did not have the same level of intensity as the senators who managed to add to their total opening up a five point lead with less than six minutes left in the quarter. Momentum continued to swing in favour of the visitors heading into halftime up by three points.

Mary Goulding and the Eagles started the second quarter with a bang as they reduced the deficit to just one point. Some more magic from Goulding gifted east Perth the upper hand creating a handy two point buffer forcing the Eagles on to the back foot. The tables well and truly started to turn as Golding got more and more involved in the action as a two point lead quickly turned into a four point one. With scores levelled at the five minute mark the Eagles hit their straps in attack to regain the ascendancy and head into half time up by six points.

Holding a handy lead East Perth refused to give in as they hustled hard for possession both in offence and defence. The lead ballooned out to as much as seven points at the end of the third quarter but some magic from Sariah Penese got her side back to within five. It was tit-for-tat throughout most of the final quarter with Warwick grinding out the game to secure the win.

Goulding was in fine form for East Perth draining 26 points but it was her work off the boards that set tongues wagging registering a staggering 23 rebounds. She also collected four assists and two steals in the loss. Teammate Opal Mader also had an impressive game sinking 25 points in her 36 minutes on court along with three assists and three rebounds as Brianna Moyes also got busy with her 20 points at 46 per cent from the field.

The scoring load was shared between a number of players for the Senators as Stacey Barr led the way with her 22 points, 13 rebounds and 10 assists in what was a stats stuffing performance. Mackenzie Clinch- Hoycard also chimed in with 23 points in the win while Tayla Hepburn showcased her class sinking 14 points and five rebounds.