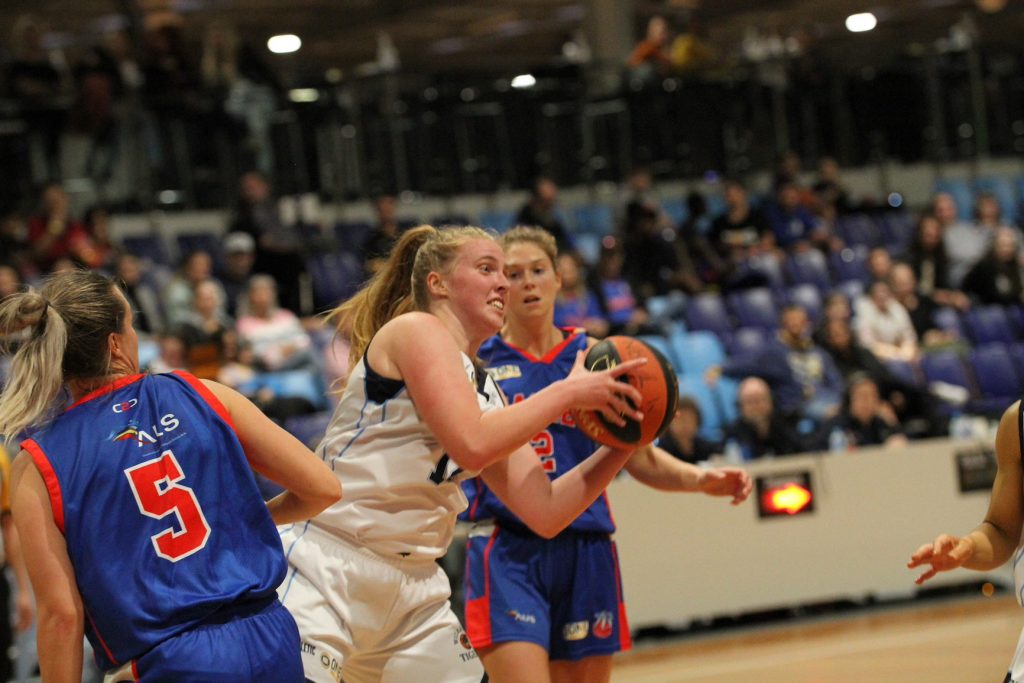 IT is that time of year with finals well and truly in the air for the National Basketball League (NBL)1 West. Both the elimination and qualifying final will take place over the weekend with the winner from each respective game moving forward to the next stage.

Tipping off tomorrow night, the sixth placed Rockingham Flames host the seventh placed Cockburn Cougars, with the Flames having notched up one more win (10-8 to 9-9) during the season. They piled on an extra seven points per game (75.2 to 68.5), though the Cougars were marginally more stingy in conceding points, 68.2 to 69.7 per game. Neither of these sides have great form heading into the contest having won just two of their past three, with Rockingham having not won since an impressive 17-point win over Warwick Senators on July 29. Since then, the Flames have dropped games to East Perth Eagles, Mandurah Magic and Joondalup meaning they search for form heading into this do-or-die elimination final. The Cougars grabbed a win on the final day of the regular season, though it came against the struggling South West Slammers, with losses to Perth Redbacks and Joondalup Wolves prior to that, though they have won more recently than the Flames – defeating Lakeside Lightning on July 31.

Tayah Burrows finished the regular season as a pinpoint passer for the Flames, putting up 5.28 assists per game to rank second in the league for assists. She coupled that with 17.71 points, 4.57 rebounds and shot 1t 40.7 per cent from the field in a damaging display. Turning 20 next month, Burrows has plenty of upside, and has put up double-digit points in all bar two of her games, averaging 23 points, six rebounds and 5.5 assists against the Cougars this season. For Cockburn, Jessie Edwards looms as a player to contain at both ends, and whilst she is not quite the facilitator Burrows is, plays her role at the five, with 16.11 points, 8.58 rebounds and 1.64 blocks, the latter of which puts her second in the league. Whilst she has not played the Flames since May 29, in her two outings, Edwards averaged 17.5 points, 10.0 rebounds and 1.5 blocks. Expect the contest to be a fierce one, with the Flames’ Alex Ciabattoni (19.93 points, 6.0 rebounds and 4.06 assists) and Christina Boag (13.76 points, 10.05 rebounds) others to watch. For the Cougars, keep an eye on forward Taylah Simmons (16.64 points, 6.0 rebounds and 3.41 assists) who is Cockburn’s other key talent.

In the other elimination final, the fifth placed Warwick Senators take on the eighth placed Mandurah Magic, but just one win separates the sides like in the other elimination final. The Senators average more points per game than any other side this season (88.11) compared to the Magic’s lowly 68.44, the lowest of the top eight sides. Defensively, the Magic stack up much better however, ranking third overall defensively, conceding just 66.11 points, whilst the Senators’ high-powered game has them ranked eighth of the finalists, allowing 77 points to their opposition. The Senators come into the finals series off the back of two wins in three games, including a good win over fourth placed East Perth Eagles. Consistency has not quite been there season for the Senators, but the same could be said of the Magic, though they come in off the back of three consecutive wins, albeit two against bottom two team Lakeside Lightning, but the third was against third placed Perth Redbacks.

Stacey Barr made the NBL1 West All-Star Five thanks to a sensational season that included 23.61 points per game, ranked second overall. The Senators guard put up 8.66 rebounds and 4.50 assists, as well as pick-pocketing her opposition 1.5 times per game. In her most recent outing against the Senators on July 17, she put up 28 points and six rebounds, but could only record the one assist, with a 17-point, seven-rebound and three-assist game coming back in May. Opposition forward Carly Boag is a player likely to keep Barr busy, with Boag putting up double-double averages of 14.50 points and 12.61 rebounds per game. She also averages 3.38 assists and 2.77 steals per match, ranking her third in both the rebounds and steals. Boag will be well supported by Casey Mihovilovich who leads the league in assists (5.94 per games) and has also managed the 12.94 points and 3.22 rebounds per match. Mackenzie Clinch Hoycard (16.33 points, 6.77 rebounds, 3.16 assists and 1.5 steals) is another to keep tabs on from the Senators perspective.

The double chance is there for the taking, though one less match on the road to a grand final would be ideal, and that is exactly the carrot dangled in front of the Joondalup Wolves and Perth Redbacks tomorrow night. The Wolves go in hot favourites having won four more games than their opponents with a 15-3 win-loss record compared to the Redbacks’ 11-7. Despite this, they actually average less points per game (75.3 to 76.6), though have the second best defensive setup, conceding just 64.1 points, compared to the Redbacks’ 69.9. The Wolves are the form team of the competition, having not lost since back-to-back defeats in Round 13, though one of them was to Perth Redbacks. The third placed Redbacks have some good form themselves, picking up five of the past seven, including the win over the Wolves, and pushing the minor premiers Willetton Tigers to within seven points.

Experienced center Kayla Steindl has been rock solid all season for the Wolves, putting up 18.56 points, 8.93 rebounds and 1.75 steals per game. In the two fixtures against the Redbacks, Steindl averaged 20 points, 9.5 rebounds and 3.5 assists per game. Though she comes in against potentially the most versatile five in the game, in Maddison Allen. The Redbacks center features in the top four of rebounds (12.61), assists (5.00) and blocks (2.66), and was the only player to deny the opposition with blocks more than two per game. Averaging the 8.55 points per match, Allen plays a more facilitating and defensive role, the ultimate team player which has helped the Redbacks get into the position they are in. She allows the likes of Makailah Dyer (21.55 points, 6.55 rebounds and 3.55 assists) and Jessica Jakens (14.31 points, 7.0 rebounds and 67.11 per cent from the field) to go to work. The Wolves have a more even spread of scorers, with the likes of veterans Rebecca Benson (11.36 points, 2.63 rebounds) and Amber Land (10.88 points, 8.05 rebounds, 2.29 assists and 1.82 steals) and young gun Neseya Parker-Williams (9.94 points, 7.27 rebounds, 2.16 assists and 2.11 steals) all having good seasons.

NBL1 title favourites Willetton Tigers will look to back up their top of the ladder regular season finish when they play host to fourth placed East Perth Eagles in the final clash of the round. The Tigers finished on top of the ladder with 15 wins and three losses, the same as the Wolves, but ranked second in points for, and had the least points conceded to be the clear standout team all season. Averaging a whopping 85.1 points per game, the Tigers were hard to contain, whilst defensively they allowed just 63.4 points. The Eagles on the other hand averaged 75.6 points per game, and conceded 70.6, which was a solid overall effort, but they will need to step it up to knock off the favourites. The Eagles are also coming in off some disappointing results, losing their past three games including to two non-finalists in the Eastern Suns and Perry Lakes Hawks. The Tigers dropped a match to the Joondalup Wolves on July 31 by six points, but bounced back with three consecutive wins, including victories over finalists, Cockburn Cougars and Rockingham Flames.

Alex Sharp was deemed the best overall talent in the league this year, earning Most Valuable Player (MVP) honours. The Perth Lynx sharpshooter was sensational all year, averaging 19.71 points, 12.94 rebounds, 4.82 assists and 1.76 steals per game. She was far from alone in her side, one of five players to average double-figure points. Though Sharp’s immediate focus will be leading her team to victory over an Eagles side that features another All-Star Five talent in Mary Goulding. The forward averaged a whopping 23.52 points and 13.35 rebounds, as well as 3.05 assists and 2.70 steals to arguably be the closest player to Sharp’s MVP status. She will be supported by the likes of Tahlia Fejo (12.67 points, 3.13 rebounds and 2.47 steals) and Opal Mader (12.20 points, 4.33 rebounds), while Brianna Moyes (9.29 points, 3.76 rebounds and 2.88 assists) has also contributed strongly. The Tigers have some high-scoring options with Samantha Lubcke leading all-comers thanks to her 23.80 points, as well as 8.53 rebounds. Emma Gandini (11.50 points, 6.44 rebounds and 2.78 assist) and Desiree Kelley (11.12 points, 6.29 rebounds and 2.94 assists) are two other leading players for the top side.