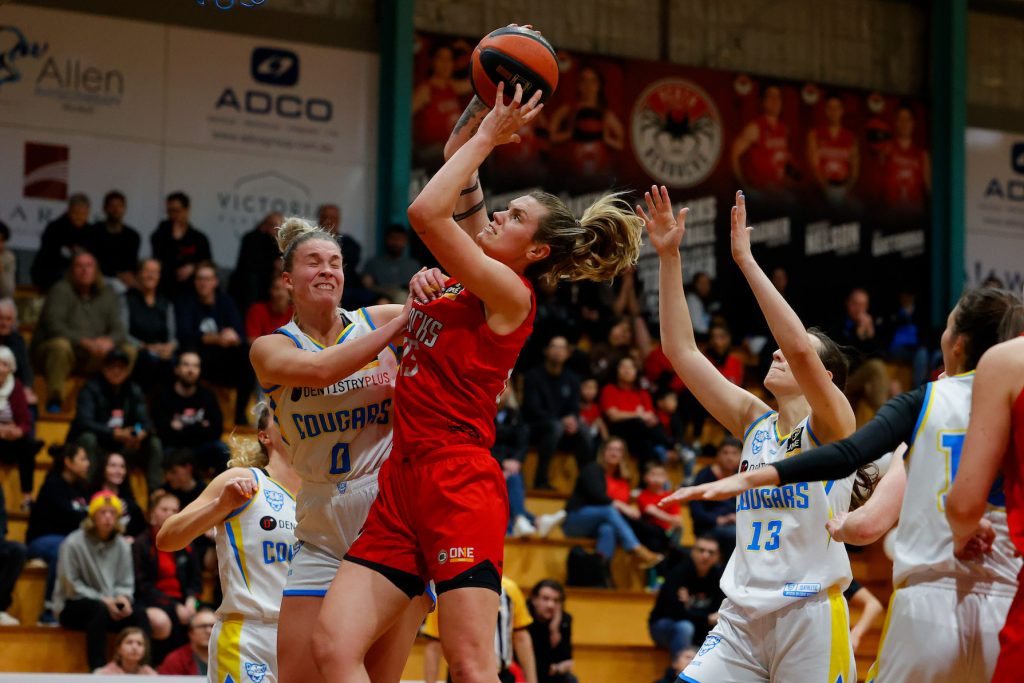 BOTH the semi-finals and preliminary finals were played over the weekend in the National Basketball League (NBL1) West Women’s with the grand finalists also confirmed with the top two sides in the Willetton Tigers and Joondalup Wolves securing passage into the grand final.

Perth Redbacks rallied against Cockburn Cougars to seal the deal in what was a hard-fought battle. it was neck and neck to start with as only a point split the two sides before the Redbacks opened up a handy lead at half time credit to a 23 point to 11 quarter. But the Cougars proved anything the Redbacks could do, they could do better, draining 27 points in the third but it was not enough to reduce the deficit going down by four.

Makailah Dyer seemed to have the ball on a string sinking a whopping 36 points for Perth while she also registered four rebounds, three assists and a steal in the win. Briana Bailey was a solid contributor with her 13 points, four rebounds and three assists as Maddison Allen impressed with a double-double thanks to her 10 points, 12 rebounds and eight assists.

For the Cougars it was Jessie Edwards that led the charge with a commanding 27 points shooting at 59 per cent from the field. She also imposed herself off the boards with her 14 rebounds with 10 of them defensive. Molly Mathews was not far off the pace registering 22 points and three rebounds with Tia Morgan and Kahlia Morgan the next best with six points apiece in the narrow loss.

It was a tantalising finish between East Perth and Warwick Senators, with the latter just sneaking over the line by a mere point. The Senators got off to a flying start pouring on 28 points to 21 and while scoring tightened up in the second Warwick maintained the lead. The Redbacks made their move in the third to claim both the ascendancy and the lead. but with a chance of grand final glory up for grabs the Senators turned it on in the fourth to come-from-behind and win.

Mary Goulding left nothing to chance proving to be a real workhorse for the Eagles with her 32 points in 37 minutes of play. She did not stop there, reeling in 15 rebounds, two assists and five steals in a stellar performance. Opal Mader also left her mark on the contest with her 13 points and six rebounds, while Tahlia Fejo and Brianna Moyes slotted nine points apiece on the loss with the latter also securing six rebounds and five assists.

Stacey Barr was the main port of call for the Senators draining 22 points including two triples. Her rebounding efforts were also on show thanks to her seven boards along with nine assists. Nicole Jorre de St Jorre was also in fine form producing 16 points while shooting at 50 per cent from the field as Caitlyn Jones chimed in with a handy 11 points, six rebounds, three assists and two steals. Tayla Hepburn just fell short of a double-double with her nine points and 11 rebounds.

The Willetton Tigers could sense an opportunity to strike and they well and truly did against Perth Redbacks. The opening quarter was all the way of the tigers as they established a 12 point lead and built on that heading into half time to push out to a 15 point buffer. The real nail in the coffin was in the premiership quarter as Willeton poured on a whopping 33 points while keeping Perth to just 17 and although scoring dried up in the final quarter it was too little, too late.

The Tigers were littered with scoring options as Samantha Lubcke unlocked her shooting prowess, finishing with 21 points to her name. it was a stats stuffing performance for Lubcke who also managed eight rebounds, four assists, three steals and two blocks. Desiree Kelley had her radar on producing 19 points while Alex Sharp came to play credit to her 15 points, 14 rebounds and 11 assist effort.

Dyer was the number one option for the Redbacks throughout the preliminary final, finishing with 28 points, four rebounds and two assists. No other player managed to reach double-digits with Jessica Jakens the closest with her nine points. Allen managed six points and eight rebounds as Raya Thompson added six points to the total but it was not enough to impact the outcome of the game.

The Wolves took advantage of the extra days break against Warwick Senators claiming a romping 37 point win. Joondalup imposed themselves from the opening quarter establishing a 10 point buffer and while neither side could be separated in the second term shooting 25 points apiece the Wolves went into halftime with their tails up. With momentum behind them the Wolves cranked things up a notch putting on 27 points while keeping the Senators to just eight and continued that rhythm into the final term running out with a comfortable win.

The combination of Kayla Steindl and Neseya Parker-Williams was at its damaging best as they combined for 44 points. Steindl topscored with 24 points for the Wolves shooting at 60 per cent from the field while she also got busy off the boards with her 10 rebounds and four assists. Parker-Williams slotted 20 points, seven rebounds, three assists, one steal and one block. Chelsea Belcher impressed for Joondalup draining 17 points while Laniesha Paddon recording nine points in the win.

It was Barr that once again stepped up to the plate sinking 15 points while Mackenzie Clinch-Haycord chimed in with 12 points in her 30 minutes as Chloe Forster slotted 11 points and five rebounds. Hepburn made an impact with her 10 points and six rebounds.