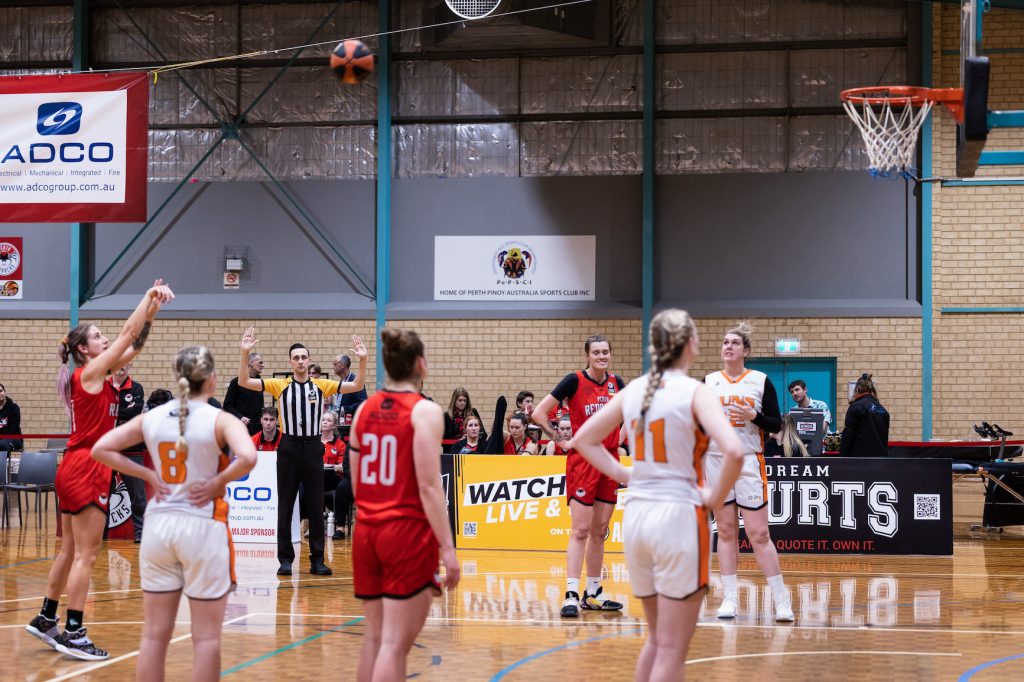 IT was another cracking round of National Basketball League (NBL1) West action with Round 16 seeing some blowout results in both the men’s and women’s.

It was a nail-biting finish between Joondalup Wolves and Willetton Tigers as only one point separated the two at the final siren (73-74). In the end it was the Tigers that just pipped their opponents at the post somehow holding on despite a second half avalanche.

Willetton came to play in the opening term and while they missed the first shot of the game quickly made up for it with Hunter Clarke asserting himself nice and early on the contest. It took just over two minutes for the Wolves to hit the scoreboard with Willetton impressing both in offence and defence. The visitors did not make life easy for Joondalup as they capitalised on the opportunities that came their way to steadily add to their growing lead. in fact by quarter time the Tigers were up by nine points credit to a 27 point to 16 term. The second quarter tightened up on the scoring front as the Wolves worked tirelessly to reduce the hefty quarter time deficit.

The Wolves flipped the script in the third as they cranked up the intensity on the scoreboard to put pressure on Willetton to create some doubt. But despite Joondalup having more scoring chances the Tigers were able to keep their noses in front as they continued to add to the scoreboard. The lead got out to as much as 14 points before Joondalup once again dug deep to apply the pressure and get back within striking distance with only seven points splitting the two sides at the final change. With the game on the line the Wolves hit the scoreboard in the first 30 seconds of the term and continued that momentum throughout the term. Scores were all tied up with less than five minutes left in the game with the Tigers somehow mustering up another level to grind out the game and clinch victory.

Lochlan Cummings was on fire for the Wolves draining 27 points at 48 per cent accuracy, from the field. He also managed a handy eight rebounds and one assist while teammate Jonathan Wade was the only other player to reach double-digits with his 10 points. The scoring fell off after that as both Reece Maxwell and Mitchell Newton managed nine points and five rebounds apiece in the narrow loss.

There were two main standouts for the Tigers as Damien Scott and Connor Minchenton did the heavy lifting. Scott drained 26 points in 35 minutes of play while also accumulating two rebounds, one assist and two steals. Minchenton on the other hand slotted 21 points at 47 per cent while also registering three rebounds, four assists and four steals. Teammate Michael Vigor got busy with his 12 points and 13 rebounds to collect a huge double-double while also picking up two assists and a steal. The other main contributor for Willetton was Hunter Clarke as he registered 11 points, five rebounds and five assists.

In other results, Rockingham Flames imposed themselves in both of their matches collecting wins against Warwick Senators and East Perth Eagles. Perth Redbacks also got the double win in Round 16 while Mandurah Magic made their presence felt in their sole outing to clinch victory.

The final game of the round was a thriller as the Eastern Suns pushed the Perth Redbacks every step of the way but fell just short (63-69). The Redbacks have had a chequered run so far this season while the Suns have struggled to find their winning ways and this game was no different.

The Redbacks held the early ascendancy up by two points at quarter time thanks to their ability to convert and capitalise on the opportunities that came their way. It only took 10 seconds for Makailah Dyer to hit the scoreboard and get the ball rolling for Perth while for their opponents it took just under two minutes for the first score to be made. The Suns skipped out to an early 10 point lead before Dyer put a stop to it with her constant hustle and attack on the rim. A raft of substitutions gave them fresh legs to close out the quarter and reclaim some momentum heading into the second term. The Redbacks took another step up in the second as they put on the after burners with Dyer continuing her merry way and Maddison Allen upping the ante while Samantha Roscoe worked in overdrive for the Suns.

Down by five points at half-time the Suns came out with a pep in their step to reduce the deficit to three points early in the quarter. Their increased hunt and desperation for the ball was on full show as they pressured the Redbacks into turnovers and missed shots while they did not skip a beat. They drew back within two points and then stole the lead credit to a Jewel Williams triple as the momentum started to swing in favour of the home side. Scores were all tied up heading into three quarter time signalling what was going to be a blockbuster final term. But Perth managed to find a way to drag themselves back into the contest and sneak ahead to claim the win.

Roscoe was the dominant scorer for the Suns with her 20 points in 34 minutes while she also collected four rebounds, two steals and three blocks. Mia Jacobs chimed in with 14 points and eight rebounds as Rebecca Motroni contributed 13 points and eight rebounds all of which were defensive. Williams slotted 12 points and while Ellyce Ironmonger did not have a huge impact on the scoreboard she starred off the boards with 12 rebounds.

Dyer topped the table with her 26 points and 12 rebounds for the Redbacks. It did not stop there as she reeled in five assists, four steals and one block. Allen chimed in with 16 points shooting at 56 per cent from the field, while she also registered five rebounds, five assists and four blocks. Raya Thompson was also solid for Perth draining 10 points, four rebounds and two assists.

The Rockingham Flames impressed in their game against Warwick Senators to claim victory while the Redbacks made it two from two against the Suns. East Perth Eagles collected a hard-fought win against the Flames while the Wolves got up against Willetton Tigers.