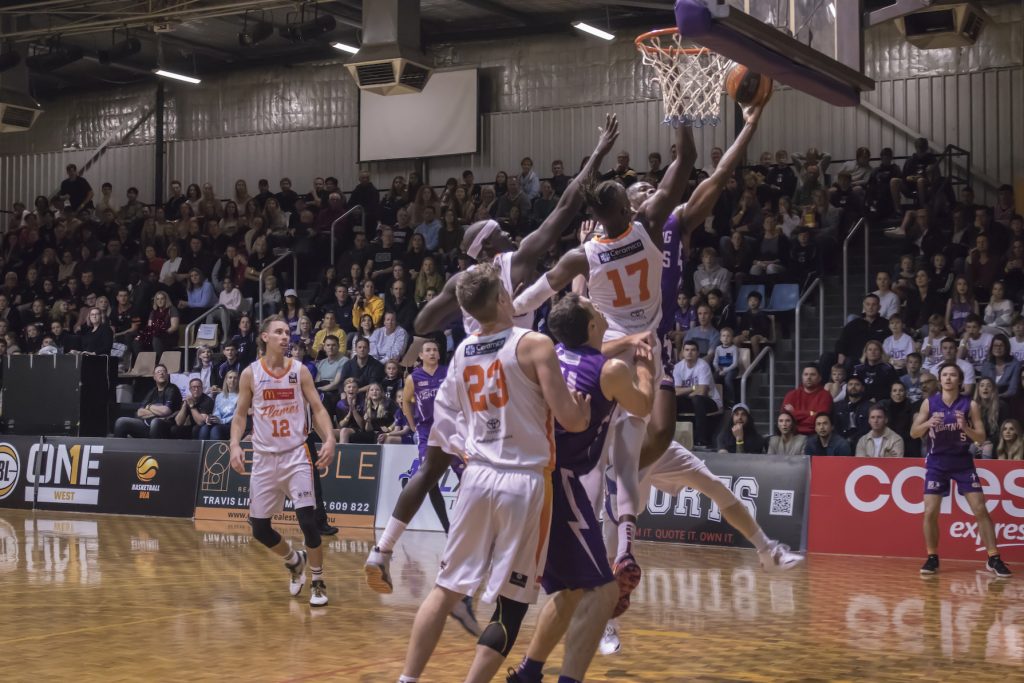 THE grand final has been decided thanks to an action packed weekend of basketball in the National Basketball League (NBL1) West. Both the semi-finals and preliminary finals were won and done with Perry Lakes Hawks and Rockingham Flames the last two teams standing. But first let’s cast an eye over the previous games.

Rockingham Flames made no mistake against Mandurah Magic asserting themselves straight away and did not take their foot off the pedal throughout the contest. Piling on 36 points to 19 in the first quarter, the Flames had things on their terms and steadily increased their margin at half time to establish a 15 point lead. that momentum continued in the third and while they dropped off in the fourth the game had already been won.

The Flames were spoilt for choice with five players hitting double-digits and just one out of the 12 players to take the court not hitting the scoreboard. Travis Durnin led the charge with his 15 points in just 18 minutes while he also accumulated three rebounds and one steal. Justin Beard was hot on his heels draining 14 points while shooting at 63 per cent from the field. Cirkook Makuak Riac was a solid performer with his 13 points and three rebounds as Ryan Godfrey chimed in with 11 points, six rebounds and two steals. Although Tom Jervis was not the most prolific he impressed off the boards with seven rebounds and four assists in the win.

It was somewhat of a one-man show for the Magic as Jerami Grace starred with his 24 points, five rebounds and three assists. Fred Williams worked in overdrive to keep the scoreboard ticking over thanks to his 17 points while Xavier Garnett-Shaw was also a handy option for the Magic producing 12 points and three rebounds. Akua Deng got busy off the boards with his six rebounds along with eight points.

It was a nail-biting finish with Perth Redbacks doing just enough to sneak over the line and claim a narrow two point victory over Willetton Tigers. Both sides traded blows throughout the contest with the Tigers holding sway in the opening quarter before the Redbacks flipped the script heading into half time with a two point buffer. With their tails well and truly up Perth added more insult to injury with a 26 to 19 point quarter. But with a grand final spot on the line the Tigers threw everything they had at their opponents to get back within striking distance but fell agonisingly short.

Damien Scott was up and about for the Tigers producing 27 points while he also imposed himself off the boards with six rebounds and three assists. Teammate Michael Vigor was also in fine form sinking 24 points – shooting at 50 per cent from the field – along with a whopping 11 rebounds and three assists. Connor Mincherton was profound with his 17 points and four rebounds but it was not enough to get the win.

For the Redbacks it was Louis Timms that inflicted a world of pain as he dropped a game-high 36 points in his 32 minutes of court time. It did not stop there as he wreaked havoc off the boards with an impressive 21 rebounds with 12 of them defensive. Teammate Tevin Jackson plied his trade sinking 22 points in the win while also dragging in nine rebounds as Isaac Gattorna-Hargrave did not skip a beat with his 19 points. Marshall Nelson just fell short of a double-double thanks to his nine points and 11 rebound performance.

With a win already under their belt from the night before, Rockingham Flames went into the contest with a head full of steam and it well and truly paid off. It was neck and neck to start the game with neither side willing to give an inch going into quarter time at 20 points apiece. This arm wrestle continued for much of the second term with the Flames  heading into the main change up by the smallest of margins. The Lightning remained hot on their opponents tails before the game was blown open in the final stanza thanks to a blistering performance from Rockingham draining 23 points to eight.

The Lightning were in the contest for most of the game before a final quarter fadeaway with Julius Bowie proving to be the key cog credit to his 23 points, six rebounds and four assists. Kyle Armour was strong for Lakeside posting 16 points in his 34 minutes while he also secured two rebounds and five assists. Jack Isenberger plied his trade as did Ben Lee with the pair scoring 15 and 12 points respectively in the loss. Although Jarrad Prue did not leave a mark on the scoresheet he most definitely did off the boards with his 18 rebounds.

When looking at the Flames it was Jervis that led the charge posting up 21 points and 14 rebounds to help get his side over the line. Durnin was not far off the pace dropping 18 points and two rebounds while Atem Bior was a solid contributor draining 15 points while shooting at an impressive 100 per cent from the field.

Perry Lakes Hawks flexed their muscles against Perth Redbacks claiming a huge 15 point win. The Redbacks had the ascendancy early coming out with a real pep in their step to create a four point lead which turned into five at half time. A flick was switched after half time with the Lakes putting Perth to the sword with a 29 to 10 point term. They capped the game off on a high winning the final term and progressing through to the grand final.

Andrew Ferguson topped the scoreboard with 25 points for the Hawks while he also made his presence felt with nine rebounds, three assists and one steal. Teammate Mitchell Clarke also chimed in with a handy 22 points while Lewis Thomas recorded a double-double thanks to his 13 points and 13 rebounds. Ben Purser and Ryan Smith also hit their straps with14 and 10 points respectively.

Jackson was the most prolific scorer out on court sinking 18 points and collecting nine rebounds all of which were defensive. Nelson worked hard to have an influence with his 17 points, eight rebounds and seven assists while Gattorna-Hargrave managed 16 points, four rebounds and six assists. Timms was kept quiet throughout this game slotting 16 points compared to his 36 the game earlier as the Redbacks failed to get across the line.