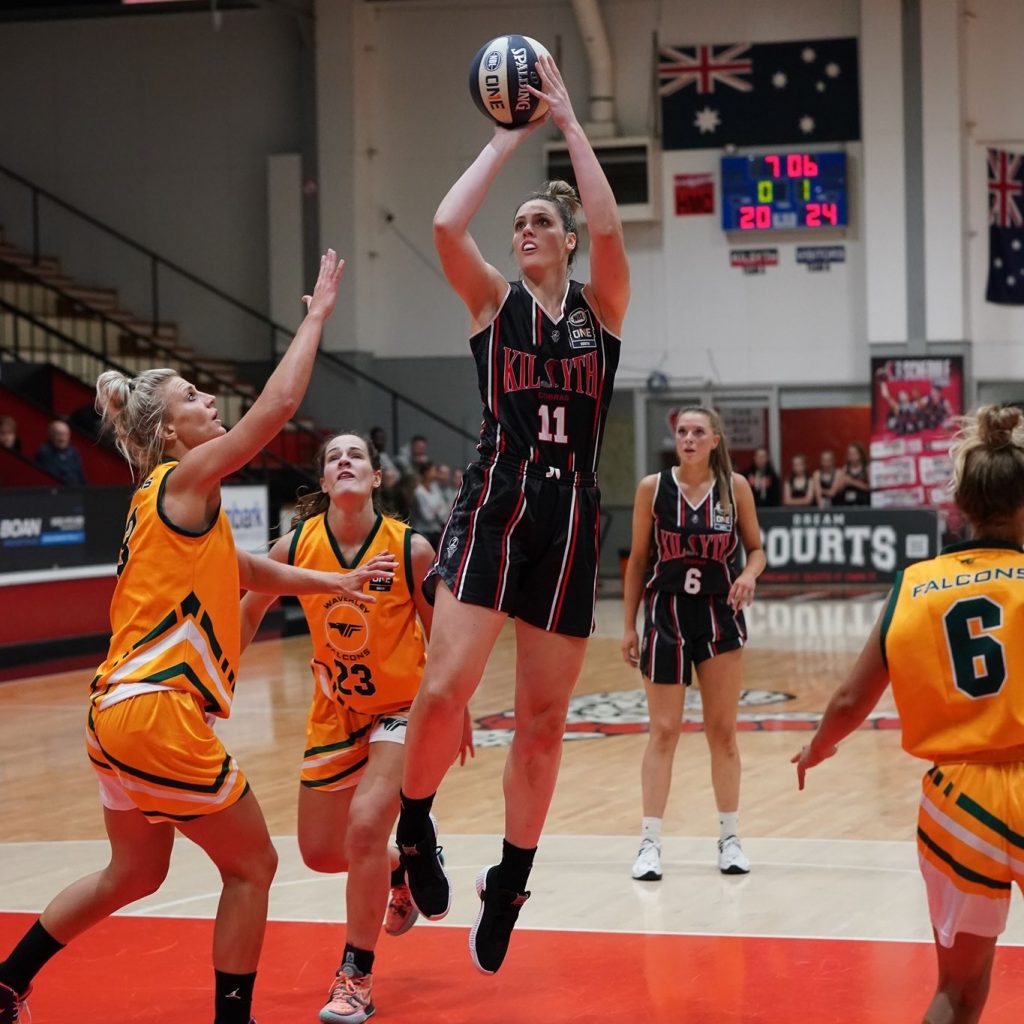 THERE were a few tight contests amongst a number of one-sided wins as the National Basketball League (NBL)1 South tipped off over the weekend and we run through the women’s division and how the teams fared.

A second quarter domination from the Sabres was the key to victory against Melbourne Tigers, winning the term by 19 points (25-6), following on from the dominant 25-15 opening term to open up a 50-21 half-time lead. Whilst the Tigers made good inroads in the second half to break even and reduce the deficit by four points, the damage was done during the 87-62 loss. Jenna O’Hea (27 points, 10 rebounds) and Rachel Jarry (22 points, five rebounds and two assists) were sensational for the winners, whilst Amy O’Neill was also handy with seven points and eight rebounds. For the Tigers, Geraldine McCorkell (15 points, four rebounds) and Zitina Aokuso (14 points, five rebounds) stood out, with the latter teaming up well with fellow WNBL talent, and AFLW star Monique Conti (seven points, six rebounds and two steals).

In the all-Tasmanian battle, Launceston Tornadoes proved far too good for Hobart Chargers despite a dismal third term. The Tornadoes raced out to a 54-26 half-time lead in a one-sided contest, before the Chargers hit back with a 24-9 third quarter, That gave them a sniff at the final break to get to within 13 points of the Tornadoes, but it would be Launceston that would finish the stronger of the sides, powering away with a 28-11 final term and securing a massive 30-point win. Keely Froling was absolutely unstoppable for the Tornadoes, knocking down 42 points at 59.3 per cent from the field, and notching up 22 rebounds – 15 defensive – five assists, three steals and a block in a huge effort. Mariah Payne (16 points, 11 rebounds, three assists and three steals) also picked up a double-double, while Teyla Evans (11 points and three rebounds) and D’Asia Chambers (seven points, four rebounds and five assists) were handy. Madeleine Garrick (26 points, nine rebounds, two assists and two blocks) and Tayla Roberts (18 points, four rebounds) were the two best for the Chargers.

A strong second term was the difference for Frankston Blues in posting an impressive 12-point win over Nunawading Spectres. The Blues won the second quarter 24-15, gaining the nine-point separation they needed to go on with it, and secure the 90-78 victory. It was a tight game all match, but Darcee Garbin was the key, knocking down 30 points – at 68.6 per cent, as well as six of eight from long-range, and picking up six rebounds and three assists in the process. She teamed up well with fellow WNBL talent Tessa Lavey who returned from the AFLW to pick up 23 points, seven rebounds and nine assists having barely missed a beat. Taylah Gillam (11 points, three assists and two rebounds) and Ella Batish (eight points, six rebounds) were the other two to stand out for the home side. Four players hit double-figure points for Nunawading, with Izzy Wright (23 points, four rebounds) the main destroyer, while Penina Davidson (15 points, seven rebounds), Louise Brown (11 points, seven rebounds), Rachel Brewster (13 points, six rebounds) and Rachel Antoniadou (12 points, five rebounds and six assists) all shared it around to no avail.

Knox Raiders have held strong in the second half to bounce back from a second term that swung in the Geelong Supercats favour, to record a narrow seven-point win. The Raiders raced out of the blocks to lead by nine points at the first break, only for the Supercats to cut the deficit to four by half-time. To the Raiders’ credit they stood up in the second half to hold off the visitors and record a 79-72 victory. Leah Santomaggio (22 points, four rebounds and four assists) and Marianna Tolo (20 points, five rebounds and two assists) both had their say on the contest, as Klara Wischer (10 points, 11 rebounds) picked up a double-double and Eliza West (14 points, five rebounds and three assists) was also busy. Sarah Elsworthy topped the Supercats’ scoring charts with 16, as well as picking up eight rebounds, three assists and two steals. Stephanie Blicavs (14 points, nine rebounds) and Aimee Clydesdale (15 points, six rebounds and two assists) both stood up in the game, but while the Supercats were strong off the boards (48-40), they struggled in transition (assists 22-13 in Knox’s favour).

Dandenong Ranges have secured an on-the-road win after a momentum-swinging contest against Diamond Valley Eagles. The Rangers took a strong half-time lead of 12 points, but the Eagles would not lie down easily, taking control in the third to cut the deficit to seven by the final break. Sensing the momentum changing, the Rangers got it back on their terms to win the quarter 23-16 and secure the victory, 79-65. Emilee Harmon (26 points, 10 rebounds) and Gemma Potter (14 points, 13 rebounds, five assists, three steals and two blocks) were sensational for the winners, as Tenaya Sooalo (18 points, four rebounds and three assists) also had a day out. Olivia Bontempelli (17 points, six rebounds and three assists) and Ivana Vasiljevic (11 points, seven rebounds and four assists) were the two players to hit double-figure points for the Eagles in the loss.

Eltham Wildcats put Ringwood Hawks to the sword after quarter time to run away with an easy 31-point win. The Wildcats burst out of the blocks in the second quarter after the sides were level at the first break, to win the term 23-8. They then went on with it in the next two quarters, winning them 18-11 and 22-13 respectively to secure the 82-51 victory. Anneli Maley brought her own backboard with her, picking up an unheard of 26 points and 26 rebounds – 18 defensive – on her way to best on court honours. Erin Riley (22 points, two rebounds, two assists and three steals) and Lily Scanlon (17 points, six rebounds and two assists) were also sensational on the scoring front, whilst Rebecca Pizzey helped out with eight points, seven rebounds and three assists. Funda Nakkasoglu topscored for the Hawks with 13 points and five rebounds, while Hope Terdich (10 points, four rebounds) and Demi Skinner (10 points) both notched up double-figure points.

Kilsyth Cobras have fired late to win in a stunning overtime game against Waverley Falcons. The Cobras trailed by eight points at quarter time, put together a mammoth second term of 29-12 to hit the front by nine, only to see that lead evaporated due to the Falcons’ 23-7 third term. Trailing by seven points at the final break, the Cobras levelled the scores with a 20-13 final term, forcing overtime which they got up in, 16-6 for an overall 84-74 victory. Carly Turner knocked down 20 points, 12 rebounds, six assists, three steals and two blocks in a complete game for the Cobras, teaming up well with Lauren Scherf (14 points, 10 rebounds and two blocks). Tia Hay (17 points, four steals) and Briahna Whatman (13 points, six assists) was also impressive in the victory. For the falcons, Aneta Bandilovska top-scored with 21 points, as well as three rebounds, two assists and two steals. Renae Mokrzycki picked up a double-double of 19 points and 12 rebounds, while Nyakoang Lok (13 points, four rebounds) and Jackie Vanderzaag (nine points, seven rebounds and five assists) were also busy.

In arguably the performance of the weekend Ballarat Rush won all four quarters convincingly to defeat Albury Wodonga Bandits by 32 points. The Rush won the quarters by seven, six, 11 and eight points in a comprehensive four-quarter effort to take care of the Bandits on the road, 93-61. Kasey Burton topscored for the Rush with 21 points, six rebounds and three assists, while Claire Constable (18 points including four of nine from long-range, two assists) and Kristy Rinaldi (13 points, two rebounds) were also consistent. Millie Cracknell (10 points) also reached double-figure points, while Alicia Froling was busy across the court with nine points, six rebounds and three assists. For the Bandits, they only had two assists for the entire game – both off the hand of Casey Ardern (two points, two rebounds and one steal), with Emma Mahady a lone hand on the scoring front with 26 points, three rebounds and a steal. The next highest scorer was Brodie-Paige Theodore with nine points and four rebounds in less than 17 minutes.

A strong first half has helped set up a win for Bendigo Braves in a low-scoring contest against Mt Gambier Pioneers. After the NBL1 South competition did not go ahead last season, the Pioneers had to wait an extra year for their debut in the league, and they took it right up to the Braves. The visitors got away to a good start with a three-point lead at quarter time and eight by the main break. The Pioneers fought back to cut the deficit to four at the final change, but the Braves steadied to solidify the win, 60-54. Kate Oliver (17 points, seven rebounds) and Tess Madgen (17 points, six rebounds and three assists) both did the bulk of the damage for the winners, whilst Cassidy McLean (seven points, five rebounds and two steals), Piper Dunlop (seven points, four rebounds) and Abigail Wehrung (six points, three rebounds, two steals and two blocks) were all impressive. Shakera Reilly managed the 16 pints and two rebounds in defeat, while Jasmin Howe also notched up double-figure points with 14 herself. Hannah Young (nine points, eight rebounds and three assists) and Sherrie Calleia (four points, six rebounds, two assists and two steals) were the other Pioneers who contributed across the court.