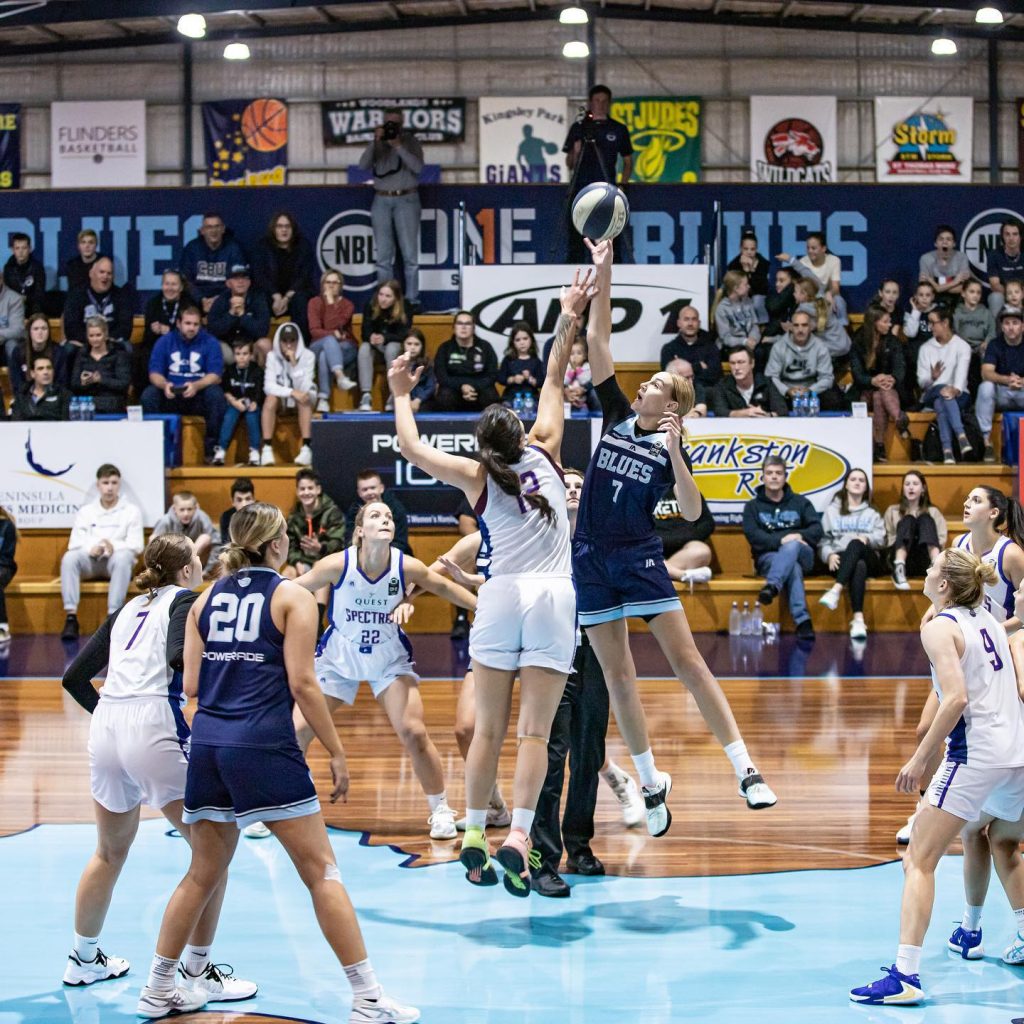 ROUND 2 of the National Basketball League (NBL) South tips off from tomorrow night, with our two feature games being the Frankston Blues up against Dandenong Ranges on Saturday (women’s) and Nunawading Specres locking horns with Sandringham Sabres on Sunday (men’s).

An early clash between two local rivals sees Frankston Blues up against Dandenong Rangers at Frankston Basketball Stadium from 5:30pm on Saturday evening. At the start of the round both these teams come in undefeated, though a Friday night clash with Bendigo Braves could change that for the Blues, in one of four all-undefeated clashes. The Blues are fresh off a hard-fought win over Nunawading Spectres by 12 points, whilst the Rangers got away with a 14-point victory over Diamond Valley Eagles on the road in Round 1.

In the Blues’ win, WNBL duo Darcee Garbin and Tessa Lavey caused all sorts of headaches for the Spectres, combining for 53 of the teams’ 90 points on the night. Garbin had a match-high 30 points, shooting 11 of 16 from the field, but crucially a whopping six of eight from long-range. She also picked up six rebounds and thee assists for her troubles. Lavey, coming off an AFLW season with Richmond, did not miss a beat with 23 points – three of eight from three-point range – seven rebounds and nine assists, not too far off an almost triple-double let alone a double-double.

Taylah Gilliam (11 points, two rebounds and three assists) and Ella Batish (eight points, six rebounds) also proved capable of causing trouble for the opposition. Statistically the Blues dominated the assist tally with 21-10, as most of the other stats were fairly even, though hitting more than half of their long-range attempts was crucial, as the Spectres only managed three of 20 compared to the Blues’ 18 of 35.

The Rangers always looked in control against the Eagles at Community Bank Stadium, as Emilee Harmon picked up a double-double of 26 points and 10 rebounds, as well as two steals. Able to crash the boards, Harmon teamed up well with rising star talent Gemma Potter. The youngster racked up a double-double herself of 14 points and 13 rebounds, as well as five assists, three steals and two blocks in the win. Tenaya Sooalo (18 points, four rebounds and three assists) and Kodie Myszka (seven points, four rebounds and two steals) were others who stood out.

The Rangers led the way in rebounds with a plus-seven in that statistical area, something they will be keen to apply here again. They were not a huge three-point shooting outfit, though made the most of it with six of 17 makes. They need to improve their work from the charity stripe, finishing Round 1 with a 50 per cent efficiency, but the visitors still got away with the win. It will be a focus if they are to take down the Blues on their home court.

The other two undefeated clashes see Knox Raiders hosting Kilsyth Cobras, and Launceston Tornadoes up against Ballarat Rush. After each team played the one game in Round 1, a number of sides will double up, with the Rush also taking on Hobart Chargers in a weekend down in Tasmania, while the Diamond Valley Eagles will hope to pick up their first win against either Eltham Wildcats or Waverley Falcons on Saturday and Sunday respectively.

Sandringham Sabres have two chances to pick up another win after going 1-0 in Round 1, taking on Mt Gambier Pioneers and then travelling to take on Nunawading Spectres. In the other two matches, Albury Wodonga Bandits host Melbourne Tigers, and Ringwood Hawks face Geelong Supercats in two battles between sides yet to taste victory this season.

There are plenty of blockbuster fixtures to pick from when it comes to match of the round, but this week we take a look at the Sunday head-to-head between Nunawading Spectres and Sandringham Sabres who both won their first round encounters. The Sabres opened the NBL1 competition with a thrilling three-point win over Melbourne Tigers on the road, while the Spectres got up by 11 points over Frankston Blues in a similar tough challenge heading down to bayside.

The Sabres did the bulk of their good work early against the Tigers at Melbourne Sports & Aquatic Centre, as the visitors piled on 50 points to 38 in the opening half, before the Tigers roared to life, scoring 56 to 47. No doubt while the 97-94 victory was a relief, the Sabres will want more of the first half, and less of the second half in the Round 2 clash with the Spectres. The Sabres dominated the rebounds with 51-38 in that game, but struggled with transition, picking up eight assists – though in a low assist game of 10-8 – and only had two steals to the Tigers’ 10. They made it count from the field however, shooting 47.2 per cent, including 43.8 per cent from long-range, and only missing one of 16 free throws.

By comparison the Spectres held firm across four quarters against the Blues to come from three points down at quarter time to lead by two at half-time, then run away with an 11-point lead by the final buzzer. The full scores and individual statistics are still unavailable at this stage, but Dain Swetalla was well on his way to a double-double alongside partner-in-crime Simon Conn. The pair will make life difficult for the opposition teams this year, while Costas Hronopoulos and Tom Wright are among the other Spectres to keep an eye on.

The Spectres should be a strong rebounding team, and will look to get plenty of points in the paint, backing themselves to nail the free-throw opportunities. They can move the ball in transition, with their stars able to stuff the stats sheet on their day, and Nunawading has enough depth to share the load, particularly in front of a home crowd.

Casting the eye across other fixtures, the Sabres have an earlier home fixture against Mt Gambier Pioneers, meaning the Spectres will come in the fresher side. Diamond Valley Eagles also do the double after winning their Round 1 match, coming up against two Round 1 losers in Eltham Wildcats and Waverley Falcons. After a thrilling one-point win in Round 1, Kilsyth Cobras travel to Knox Raiders, while the winless pairing of Frankston Blues – who take on Bendigo Braves tomorrow night – and Dandenong Rangers looms as a must-watch.

Ballarat Miners head to the Apple Isle to face Hobart Chargers tomorrow night, before a big clash with North West Tasmania on Saturday. The Melbourne Tigers make the trek to the border to take on Albury Wodonga Bandits, while in the final game, Ringwood Hawks host Geelong Supercats in another all-undefeated clash on Saturday.