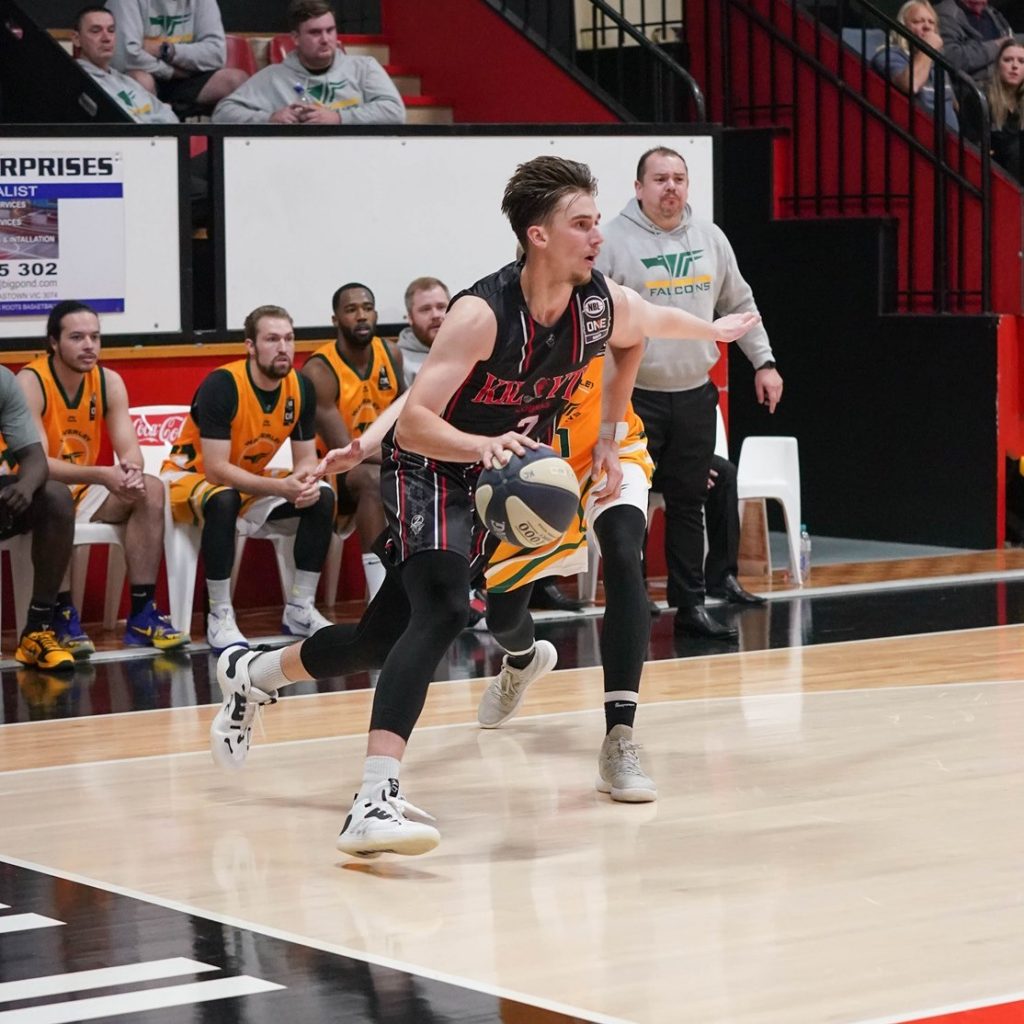 THERE were some sensational individual efforts amongst the number of tight National Basketball League (NBL)1 South men’s results in Round 1 as the competition tipped off over the weekend.

Sandringham Sabres have bravely held on against Melbourne Tigers to record a memorable three-point win to open the NBL1 South season. The Sabres raced out to a seven-point lead at quarter time, and went up by 12 at the main break. The Tigers hit back in the second half to cut the deficit to just six at the final break, and clawed to within one point in the final 12 seconds before a couple of Sabres free throws sealed the deal at a three-point margin, 97-94. Kuany Kuany had a night out with 20 points, nine rebounds and two assists, but he was far from alone for the Sabres. Nicholas Gabsch – who shot the last two free throws – had the 18 points, eight rebounds and two assists, while Tom O’Brien (17 points, two rebounds and two assists) and Kobe Davies (13 points, three rebounds) both had strong performances. Felix von Hofe threatened to spoil the Sabres’ party with 21 points, six rebounds, two steals and two blocks, being the standout shooting threat on the evening. Anthony Karabatsos (17 points, six rebounds and three assists) and Walleldin Elbour (13 points, six rebounds) also contributed strongly as part of six Tigers who reached double-figure points.

Nunawading Spectres have produced a impressive second half against Frankston Blues to win by 11 points at Frankston Basketball Stadium, trailing by three points at quarter time, the Spectres turned the tables on the home team to lead by two at half-time. Then in the second half, scored 50-41 to keep increasing the separation and secure the 94-83 victory. At the time of publishing, the full individual statistics were yet to be completed.

Geelong Supercats came away with the win on the road, winning the first three quarters to put the result against Knox Raiders beyond doubt. The Supercats led by as much as 18 points at the final break before the Raiders hit back with a 30-22 high-scoring final term to cut the difference to 10 at the buzzer. Wang Nyieth led the way with 22 points and five rebounds for the Supercats, while Isaac Turner (17 points, four assists and four steals) was also impressive. Ma’alo Hicks had his way off the boards with 14 rebounds, three assists, three steals and two blocks to go with his four points, while Liam McInerney (10 points, six rebounds) was one of another three Supercats to hit double-figure points. Jack Roberts equal top-scored for the Raiders with 15 points, six rebounds and two assists while Dylan Hare was the more accurate one from long range, sinking five of 10 on his way to 15 points, five rebounds and four assists. Simon Grant (10 points, eight rebounds, four assists and three steals) and Abraham Nyok (13 points, eight rebounds) were the other two Raiders to shine in the loss.

Diamond Valley Eagles posted a comfortable win over Dandenong Rangers, getting up by as much as 25 points at the final break. The Eagles lead by 10, 12 and 25 at the end of the first, second and third quarters, before the Rangers marginally won the last term, 18-16. It mattered little though as the Eagles saluted 90-67 in front of their home fans. Ngor Manyang was the standout shooter for the Eagles, dropping 22 points, six rebounds and three assists on the night, teaming up well with Ben Allen (13 points, nine rebounds and three assists). They had plenty of contributors get close to double-double efforts, with Matt Reynolds (11 points, nine assists, four steals and three rebounds), Darcy Harding (11 points, eight rebounds and five assists) and BJ Symons (10 points, nine rebounds) sharing the load. For the Rangers, Oliver Hayes-Brown did collect a double-double with a huge 18 points and 12 rebounds in the loss. Sean Macdonald top-scored with 19 points, three rebounds, three assists and two steals, while Max Richards (nine points, three rebounds) made the most of his 12 minutes on court.

Ringwood Hawks came back from a two-point half-time deficit to have a stronger second half and run away with a 10-point win over Eltham Wildcats. The Hawks trailed 49-47 at the main break, but scored 46-39 in a good defensive effort in the second half to win, 98-88. Adrien Sturt was fantastic for the Hawks, finishing with 25 points, nine rebounds – five offensive – and five assists, while CJ Asuncion-Byrd (19 points, five rebounds), Jack Barry (13 points, six rebounds, six assists and two steals) and Trevor Latham (13 points, eight rebounds), and Matthew Snow (11 points, six assists, five rebounds and three steals) all contributed to the cause. Adam Doyle (24 points, four rebounds and three steals) was the top scorer for the Wildcats, as Simon Bradbury (14 points, 10 rebounds, two assists and two steals) and Ovie Magbegor (10 points, 15 rebounds and three assists) both picked up double-doubles. Justin Aver was also productive despite only shooting three of 10 from the field, finishing with 15 points, eight assists and five rebounds.

Kilsyth Cobras have dealt a late blow to the Waverley Falcons, with Corey Jeffs three-pointer in the dying seconds of the match securing a one-point victory in front of home fans. The Cobras led by six points at quarter time, but their lead was whittled down to three at the main break, and two by the final change, with the Falcons winning the final three quarters – including the last term. Falcons’ Bennie Lewis made a jump shot to put the visitors two points up with 35 seconds remaining, but Jeffs’ long-range bomb – and a subsequent miss from the Falcons secured the Cobras’ 69-68 victory. Adrian Tomada hit 16 points, and picked up nine rebounds and four assists for the Cobras, while Deng Riak had a double-double of 14 points and 10 rebounds, and Joel Naburgs finished with 12 points and four rebounds. Jeffs’ match-winner brought him up to nine points and was ironically the first triple he made all night, having missed five previous attempts. For the Falcons, Durrell McDonald top-scored with 16 points, as well as three assists and two rebounds, while Lewis had the 16 points, eight rebounds and two assists. Michael Harper (14 points, two rebounds) and Jake Heath (seven points, seven rebounds) were other productive players in the losing team.

Ballarat Miners have produced an impressive third term to secure an eight-point win over Albury-Wodonga Bandits on the road. The Miners led at each break but only by two and three points at the first and second breaks respectively, before piling on 27 points to 20 and opening up a double-digit lead, The final term was a low-scoring slog, with the Bandits cutting into the deficit by two, but still going down, 73-81. William Hickey put up 24 points, 10 rebounds and seven assists for the Miners, with Deng Acuoth (22 points, 18 rebounds, two assists and two blocks) phenomenal off the boards, and Matt Kenyon (17 points, 12 rebounds and two steals) the third player to achieve a double-double from the visitors. Mitchell Dance led the scoring for the Bandits with 26 points and two steals, while Bijan Johnson (13 points, four steals, two assists and two rebounds) and Jacob Cincurak (12 points, six rebounds and five assists) were others from the home team that reached double-figure points.

Bendigo Braves have won on the road against Mt Gambier Pioneers, securing a 13-point victory in style despite a double-double effort from Pioneers’ Duom Dawam. The Braves were quick to build the momentum early with a seven-point lead at the first break, and they doubled that by half-time. The Pioneers managed to get it back a point at the final change, but could not dig into it any further during the 82-95 loss. Dawam finished with 31 points – at 50 per cent from the field – and 13 rebounds – six offensive – to be the standout player. Thomas Daly (21 points, two rebounds and two assists) was the other key scorer, as the pair did the bulk of the work. Kane de Wit finished with eight points, 13 rebounds, five assists, six steals and two blocks in an all-round effort despite a 25 per cent field goal shooting percentage. The winners shared the ball around with Ray Turner picking up where he left off in 2019 with a double-double of 20 points and 14 rebounds. Nelson Larkins (17 points, five rebounds and four assists), Brennan Rymer (15 points, seven rebounds, six assists and three steals) and Chris Hogan (10 points, nine rebounds and two assists) were others who had an impact in the match.