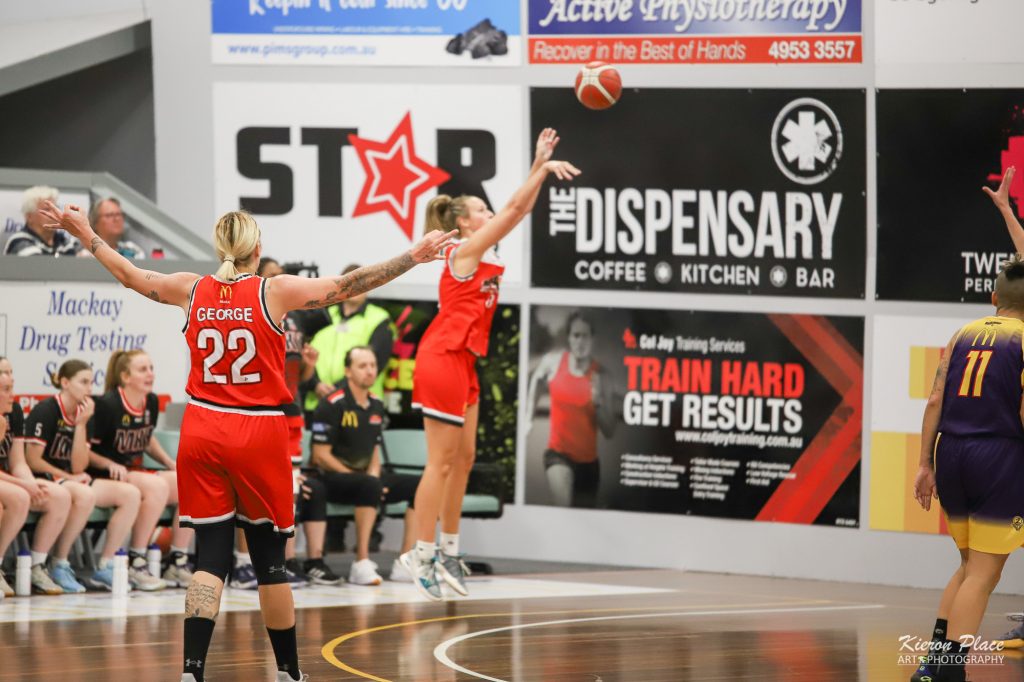 JUST a trio of North Queensland clashes in each of the men’s and women’s National Basketball League (NBL1) North divisions proceeded last weekend due to the snap lockdown announced on Saturday. The Friday night clash saw Townsville Flames win both games over South West Metro Pirates, with Mackay and Rockhampton winning their respective clashes over Cairns, handing the Dolphins and Marlins a combined four losses in Round 12.

Tipping off on Friday night, Townsville Flames put up a big 29-point buffer on South West Metro Pirates, courtesy of a dominant first quarter. Piling on 31 points to 11 to open up a 20-point lead by quarter time, the Flames were unstoppable, winning all four quarters and holding the Pirates at bay. The home team did arrest the poor first quarter by only losing the next three by a total of nine points, but it would be too little, too late with the visitors winning, 80-51.

Mia Murray put up 20 points, as well as four assists, three rebounds and two steals, teaming up well with Steph Reid (21 points, six rebounds, four steals and two assists) for the Fire, while Micaela Cocks (16 points, six rebounds and three assists) and Jaimee Seebohm (eight points, nine rebounds, four assists and two steals) were also busy. Amanda Johnson was the standout for the Pirates with a double-double of 18 points and 12 rebounds, while Tylah King had the 10 points in the loss.

In the standalone Saturday clash, Mackay Meteorettes easily accounted for Cairns Dolphins courtesy of a massive first half. Keeping the visitors to just 24 points in the second half, the Meteorettes piled on 56 points themselves to lead by 32 at half-time. Cairns reduced the deficit to 24 by the final break, before the Meteorettes just poured on more in the final term with a 19-12 last quarter to win comfortably at home, 96-65.

Rockhampton Cyclones handed Cairns Dolphins a second straight loss, winning by 20 points at Bravus Arena. The Cyclones scored 25-18 in the opening term to go up by seven, and edged ahead more at the next breaks. They led by nine at half-time and 13 by the final break, before scoring 20 to 13 in the last quarter to run out impressive 87-67 winners.

Much like in the earlier women’s division game, the Townsville Heat mens side put South West Metro to the sword early with a dominant first half. They piled on 29 points to 14 in the first quarter to lead by 15 points, then extended that out to 21 by the main break. Maintaining that lead and adding one more by the final break saw them home and hosed, before the Pirates cut that point back in the last to go down by 21 points, 68-89.

Mackay Meteors took control early, overcame a Cairns Marlins fightback and then piled on the points in the third term to run out 19-point winners in a clash of big individual efforts. The Meteors raced out to a 13-point lead at quarter time, were cut back to just eight by the main break, and then blew out to 19 at the final change, to hold on by that margin in the end for a 98-79 triumph.

Harry Froling produced one of the performances of the season, dropping a ridiculous nine of 15 three-pointers, on his way to 40 points, 10 rebounds, three assists and two steals. He was far from the only eye-popping number-cruncher on his side, with Emmanuel Malou (12 points, 13 rebounds and five assists) picking up a double-double, and Jerron Jamerson (29 points, five rebounds, four assists and two steals) nailing baskets from all areas on the floor. Anthony Fisher (18 points, two rebounds), Deba George (15 points, three assists, two rebounds and two steals) and Alex Loughton (13 points, four rebounds) were the key scorers in Cairns’ loss.

In by far the closest game of the round, Rockhampton Rockets overcame a disappointing first quarter to run over the top of Cairns Marlins and hand the Marlins their second consecutive loss of Round 12. The visitors dominated the opening stanza with a 27-15 opening term, before the Rockets clicked into gear. Only cutting into the lead by one at half-time, they reduced the deficit down to seven at the final break, then piled on 23 points to 13 in the last term to win by a narrow three points, 89-86.

Josh Wilcher (22 points, 15 assists, two rebounds and two steals) was phenomenal in picking passes on offence, teaming up with Kendall Stephens (21 points – five of eight from beyond the arc – and five rebounds) and Najeal Young (17 points, seven rebounds, six assists and four steals) in the win. For the losers, Fisher produced another big night with 24 points – five of six from three-point range – four rebounds and three assists. James Mitchell had 12 points, 14 rebounds and eight assists in an almost triple-double, while Loughton (17 points, five rebounds) and George (13 points, six assists and two rebounds) all hit double-figure points.