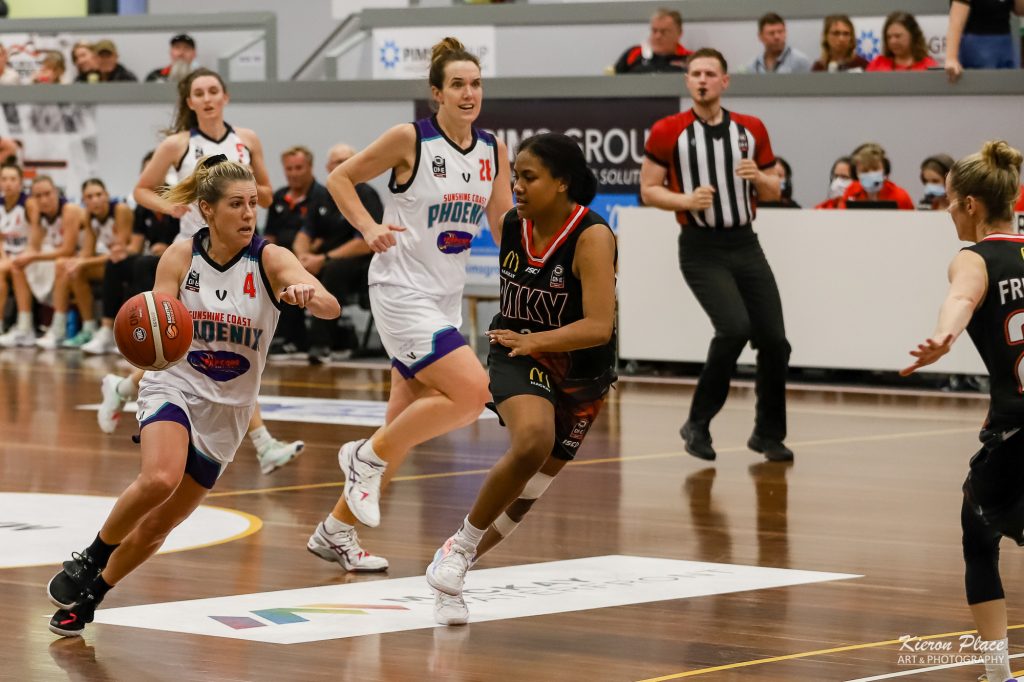 THE first week of finals are done and dusted with just four of the eight teams progressing through to the semi-finals in the National Basketball League (NBL1) North Women’s. There were a number of blowout games, along with a couple close encounters making for an exciting round of finals.

The Southern Districts Spartans got the chocolates over Northside Wizards with a convincing 25-point win. The Spartans made their intentions clear in the opening quarter establishing a six-point buffer at quarter time. Things started to tighten up in the second term before Southern Districts put the foot down in the third to reclaim the ascendancy. From then on our the game was over as the Spartans cruised to victory over the Wizards.

Madelyn Willey had all the answers for the Spartans recording a team-high 22 points and shooting at 67 per cent accuracy from the field. It did not stop there for her as she pulled in eight rebounds, five assists and three steals. Maddison Rocci imposed herself in the win with a double-double after draining 21 points and picking up 10 rebounds and five assists. Nadeen Payne and Natalie Taylor both played crucial roles with their 18 and 10 points respectively in the win. Kalani Purcell also left her mark with 11 points, eight rebounds and six steals.

There were two main prongs in attack for the Wizards with Courtney Woods and Tiana Mangakahia both hitting the scoreboard in a big way. Woods led the charge with her 28 points and nine rebounds as Mangakahia also had a profound impact thanks to her 23 points, seven rebounds and 10 assists in an all-round stellar performance. Regan McCarty was the only other player to really make a splash with her 12 points in the loss.

It was a one-sided affair as Logan Thunder ran rampant against Brisbane Capitals keeping them to a mere 29 points. The Thunder held no prisoners in their clash asserting themselves on the contest from the get-go and only tightened the screws as the game went on. The Capitals managed 14 points in the opening term before being completely and utterly shut down in offence for the rest of the game with just 15 points added. Logan went to town in the second term posting 31 points to four and making light work of their opponents.

The Thunder had no shortage of viable options in attack with Cassie Carroll topping the table with her 17 points, four rebounds, two assists and two steals. Mikaela Ruef was also her dominant self with a huge double-double thanks to her 16 points and mind-blowing 24 rebounds. Carla Drennan found her rhythm posting 14 points in just 17 minutes of play for the Thunder.

It was slim pickings for the Capitals with Anna Cameron topscoring with nine points but a handy 16 rebounds in what was a disappointing game. Brooke Blair was the next best with her seven points as Grace Champion and Stephanie Collins managed five and six points apiece in the loss.

Townsville Flames are moving through to the next stage of finals after impressing against Gold Coast Rollers. It was all one way traffic in the opening quarter, with the Flames pouring on the early scoreboard pressure placing the Rollers onto the backfoot. Townsville extended the lead at half time to 19 and continued that trajectory into the second half. They put the nail in the coffin in the final quarter, piling on 14 points to six.

Micaela Cocks was a force to be reckoned with posting 23 points in the win for Townsville. She also accumulated four rebounds and four steals as teammate Stephanie Reid slotted 17 points at 63 per cent from the field. Reid recorded a huge triple-double credit to her 12 rebounds and 12 assists to lead her side to victory. Jaimee Seebohm was solid with her nine points as Mia Murray also inflicted pain with her seven points.

It was Casey Samuels that did the heavy lifting for Gold Coast recording a team-high 18 points including two triples. She also registered eight rebounds, three assists and four steals with Lauren Mansfield also working in overdrive for the Rollers thanks to her seven points, 13 rebounds and four assists. Aimee Durbidge managed six points in her 22 minutes but it was not enough to trouble the Flames.

The final game of the semi-finals went the way of the Mackay Meteorettes downing Sunshine Coast Phoenix by 22 points. It was a hotly contested start to the game with just two points separating the sides at the first change. The Phoenix flipped the script in the second to hold the lead but that was short lived as the Meteorettes came to play in the third attacking the rim with a 25 point to 13 quarter. With momentum behind them, Mackay sailed to victory in the final with a shooting spree.

Both Chelsea Brook and Heidi Freeburn were unstoppable for Mackay producing 24 points each. Freeburn had her radar on from range nailing four triples at 100 per cent, while Brook managed nine rebounds falling just short of a double-double. Cayla George added a helping hand with her nine points and 19 rebounds – 12 of which were defensive as Skye Rees also got involved with her nine points.