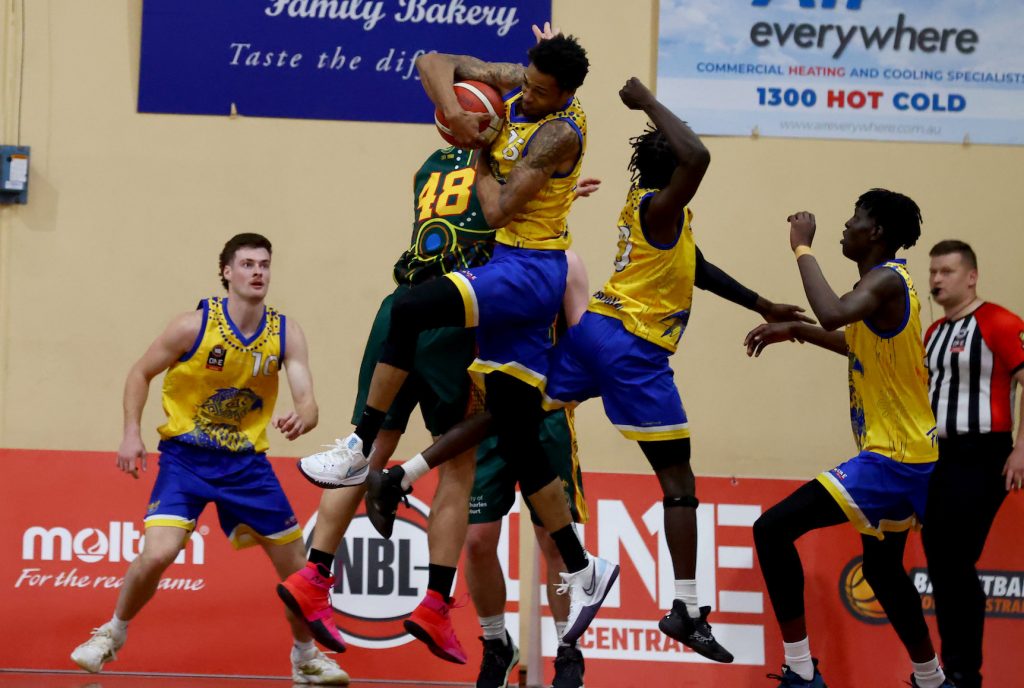 ROUND 13 of the National Basketball League (NBL1) Central played host to a number of cracking matches in both the men’s and women’s leagues.

The Eagles bounced back after a loss last round to defeat the Warriors by  34 points. It was a one-sided affair from the opening quarter as the Eagles piled on the scoreboard pressure with their 27 points to 12. They maintained this level of intensity throughout majority of the game and while they lost the third term 13 to 17 they hit back in the fourth with a staggering 32 point quarter. Malith Machar was in fine form for the winners, draining 30 points at 63 per cent from the field, while also recording a ridiculous 21 rebounds. Gregory Mays also got busy sinking 18 points, nine rebounds and two blocks. Jake Rios found his groove finishing with 16 points as Michael Harris managed 14 points and 11 rebounds. For the Warriors it was Joe Jackson that led the way with his 18 points and 13 rebounds. Teammate Daniel McKee was the next prolific credit to his 11 points at 46 per cent from the field. Luke Stanbridge also contributed seven points and 10 rebounds in the loss.

It was a comprehensive win for the Eagles who extended their five game winning streak, to six downing the Warriors by 26 points. The Eagles got off to a fast start and did not look like relenting credit to their 11-point lead. In fact they won every quarter bar the last to control proceedings and keep the Warriors at bay despite their best efforts. Samantha Simons was causing all sorts of havoc across the court for the Warriors producing 30 points, six rebounds and seven assists. Cara Annetts was also prominent for the Eagles with her 13 points and five rebounds as Brooke Basham was up to her usual tricks with 12 points at 42 per cent from the field. Emily Winter was the main source of pain dropping 24 points for the Warriors as Serena Waters also contributed a handy 11 points and five rebounds in the loss.

West Adelaide Bearcats overcame an early deficit to record victory against the Panthers. Down at quarter time the Bearcats came out with increased intensity in the second quarter to pile on the scoreboard pressure thanks to their 30 points. Neither side could be separated at half time, while there was only one point the difference at three quarter time before West Adelaide put the foot down in a big way in the final stanza. The Bearcats managed 25 points to 14 to steal the win. Owen Hulland and Alex Mudronja worked in overdrive for the Panthers amassing 22 and 20 points apiece whole Todd Davies was another that chimed in with a handy 12 points. Mudronja also managed 11 points and five assists as Hulland registered seven rebounds. Samuel Johns was the only other player to hit 11 points for the Panthers. Four players hit double-digits for the Bearcats with Fabian Johnson recording a team-high 21 points at 53 per cent from the field. Bryan Michaels was also up there for West Adelaide with his 19 points and six assists as Earnest Ross impressed, draining 18 points, 14 rebounds and seven assists.

The Panthers managed to get the job done against the Bearcats by 11 points in what was a see-sawing affair. The Panthers got off to a hot start but were held to a mere eight points in the second term as the Bearcats took control of the game. That momentum was short lived as West Adelaide wrestled back control but did not fully capitalise until the final term where the home side piled on 30 points to 13. Olivia Thompson and Teresa McGreehan were in full swing for the Panthers as they slotted 23 and 22 points apiece. Thompson did not stop there as she also accumulated 15 rebounds in the win. Jordan Hunter got busy in her 39 minutes out on court with 14 points as Hannah Stewart slotted 11 points at 80 per cent from the field. Jasmin Fejo was in fine form credit to her 27 points and nine rebounds as Jennie Rintala wasted no time with her 22 points and 10 rebounds.

The Central District Lions came with a point to prove in their clash against the Southern Tigers running home with a 25 point win. The Tigers were caught on the backfoot almost instantaneously only managing a mere nine points in the first term while the Lions slotted 22 of their own. Scoring improved for the Tigers as the game went on but the damage had already been done as they found it impossible to inch their way back into the contest despite an improved effort after half time. Both Nick Wurm and Lachlan Olbrich slotted 14 points apiece while Koop McCalop was the other main port of call for the Tigers with 13 points and eight rebounds. Christian Artacho was solid off the boards walking away with 12 rebounds in the loss. David Humphries recorded a double-double for the Lions with his 23 points and 15 rebounds in his 39 minutes out on court. Kiir Deng had a hot hand with his 18 points and 12 rebounds as teammate Magok Manyang did not skip a beat slotting 17 points but at a lowly 29 per cent on the field.

It was a white-wash for the Tigers as they collected a 40-point win against the Lions who struggled to fire on all fronts. The Tigers have been in ripping form and this game proved no different as they put the clamps on in defence and poured on the points in offence. The Lions only managed to record 15 points in the opening half. Conversely the Tigers piled on 37 to give them some real ascendancy. Although Central District increased their output in the second half the Tigers were up to the challenge and continued their merry way. Tiege Morrell was a force to be reckoned with slotting 29 points and amassing 13 rebounds in the win as teammate Morgan Yaeger also chimed in with 13 points and six assists. Jemma Thacker and Isabella Stratford were also up to the task with 10 points each. It was a tough day at the office for the Lions but it was Meaza Otto that led the way with her 12 points as Samantha Kennett managed 10 points.

The Flames managed to muster up a 12-point win over the Mavericks in what was a hard-fought win. The Mavericks had the upper hand in the opening quarter creating a seven-point lead before Norwood fought back in the second to completely and utterly flip the script. With their tails up at half time the Flames continued the charge into the third and while they were outscored in the final the damage was all but done. William Wise was impressive for the Mavericks sinking 27 points while also registering 13 rebounds and two assists while Owen Raneberg chimed in with 19 points and five rebounds in the loss. Tom Cromarty and Isaac Warhurst worked hard for their 14 and 11 points respectively but it was not enough to get their side over the line. It was a masterclass from CJ Turnage as he topped the table with his 26 points and 15 rebounds to record another double-double. Ray Harding was the next best with 16 points while both Daniel Webber and Jordan Wilson helped out with 14 and 11 points with the former also imposing himself off the boards with 12 rebounds.

The contest between the Mavericks and Flames was intense but in the end it was the Mavericks that fell short, recording their sixth straight loss. The Flames claimed the lead early and steadily increased their buffer at half time. They did not take the foot off the pedal in the third and while the Mavericks came back in the fourth the game had already been won and done. Mollie McKendrick had an impressive performance for the Mavericks sinking 21 points and 15 rebounds, 12 of which were defensive. Kedeisha Kartinyeri also provided a helping hand with her 11 points and five rebounds while teammate Rachel Hines was the next highest contributor with her eight points in 35 minutes. Alex Wilson topscored with 23 points at 42 per cent from the field along with 11 rebounds as Sophie Kerridge also got busy with her 17 points.

It was a tight tussle between North Adelaide Rockets and Sturt Sabres as the two sides battled it out. In the end it was the Rockets that walked away with the chocolates thanks to a blistering first term of basketball. The Rockets added 31 points to their tally to kickstart proceedings before the Sabres steadily pegged the margin back but fell short of the win. Jack McVeigh was in scintillating form for North Adelaide draining 33 points, seven rebounds and three assists while Jimma Dau found his groove shooting at 56 per cent from the field for his 17 points. Tobias Dowdell also made his presence felt thanks to his 13 points. Sam Daly topped the table for the Sabres with his 26 points as Keanu Rasmussen registered 22 points and five rebounds. Joel Spear managed a double-double with his 10 rebounds and 10 points.

The final game of the round between the Rockets and Sabres went down to the wire as the Sabres survived a late comeback from North Adelaide to secure the win. The Sabres snuck out to a narrow lead at quarter time and by half time established a five-point lead. the Sabres elevated their offence in the third pouring on 20 points but the Rockets were not about to lie down, going all out in the final stanza but falling just short. Jess Good was a key target for the Rockets draining 25 points and a whopping 23 rebounds. Taylor Ortlepp and Abigayle Mader both managed 16 points apiece in the loss as Sam Defrancesco chimed in with 12 points. For the winners, Kylee Smith was up and about with her 19 points as Kayla Matthews also collected 16 points and six rebounds. Zoe Walker-Roberts also played a crucial role with her 13 points as Nicola Mathews slotted 14 points at 50 per cent from the field.