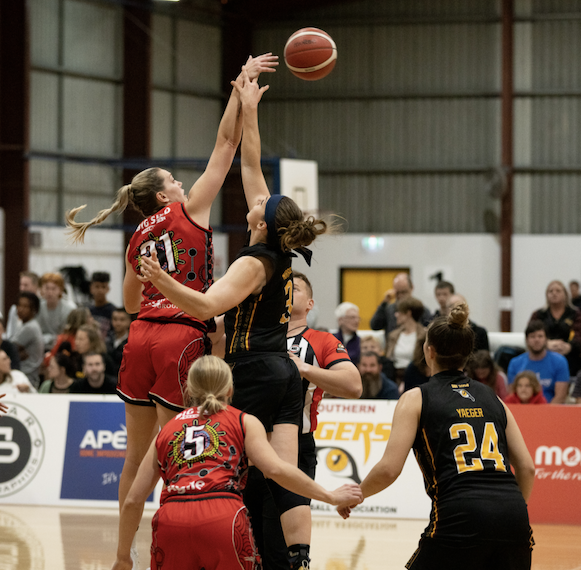 IT was a good round for Sturt Sabres in the NBL1 Central with the side clinching strong wins in both the men’s and women’s while South Adelaide Panthers also impressed. It was a mixed bag of results with both leagues seeing some close calls and some huge blowouts as the teams continue to blow off the cobwebs two weeks in.

Norwood Flames notched up their first win of the season, getting over the top of the Eagles by seven points in a game filled with twists and turns. The Eagles claimed the ascendancy early creating a nine point buffer and extended it to 11 at half time before Norwood flipped the script in the second half. A strong third quarter boasting 28 points to 16 was the real game changer, pushing Forestville onto the back foot, and they just could not recover. CJ Turnage was the main instigator for the Flames sinking an impressive 37 points at 60 per cent while also reeling in nine rebounds and two steals. Daniel Webber made a splash with 14 points as Matt Lycett contributed 12 to the winning total. For the Eagles it came down to the performance of two key players in Michael Harris and Jake Rios. Harris dominated with 35 points and eight rebounds as Rios secured 17 points and three assists in the narrow loss.

The Panthers notched up their second win of the season, convincingly downing the Mavericks by 23 points credit to a dominant first and last quarter. Both sides proved to have no issue finding the rim but could not sustain that level of scoring intensity for a full four quarters with the Panthers getting well beaten in the second (34-24) but able to bounce back in the second half to restore the winning margin. Nathaniel Koko led the way with 20 points as Rigby Aktanarowic chimed in with a handy 18 points and six rebounds. Jordan Robertson was the other one able to have an influence sinking 15 points. For the Panthers it is hard to go past the services of Todd Davies who topscored with 25 points while Codey Ellison had a game to remember thanks to his 15 points and 19 rebounds. Jarryd Hoppo and Kristian Ciabattoni were other main facilitators for South Adelaide.

The battle between the Bearcats and Tigers caused plenty of intrigue with only eight points separating them at the final break and going in the favour of the latter. It was the Bearcats’ first win of the season, leaving the Tigers ruing missed opportunities. Full player statistics and quarter scores are yet to be released at time of publish.

Sturt Sabres kept the good times rolling producing another win while the Lions fell short by 17 points. Holding the lead heading into the first break, the Sabres worked in overdrive to reverse their fate and get back within striking distance in which they did. But their best efforts came in the third as the minimised the impact of the Lions keeping them to 10 points as they piled on 22 of their own. Lual Diing was a strong performer for Central District finishing with 18 points and five rebounds to his name with Magok Manyang also notching up 18 points of his own. Jordan Centenera was also handy with 12 points at 63 per cent from the field. Sam Daly was impressive for the Sabres sinking 18 points as Joel Spear and Jack Turnbull also got busy to keep the scoreboard ticking over. Keanu Rasmussen made his presence felt with a 17 point, five rebound and two steal performance.

The Rockets remain winless after two rounds as the Warriors handed them a 34-point loss, credit to their class across the court and defensive pressure to repeatedly shut down their attacking forays. The Warriors led every step of the way, outscoring their opponents in each quarter and steadily building on their momentum through the likes of Luke Stanbridge (25 points and three rebounds) and Julian Jacobs (18 points, nine rebounds and 11 assists). They were ably assisted by the likes of Joe Jackson who managed 18 points and 12 rebounds of his own in the win. Jimma Dau was the most proficient for the Rockets nailing 13 points at a lowly 29 per cent from the field while Tobias Dowdell was hot on his tail with 12 points and 10 rebounds.

The game went down to the wire as the Eagles just snuck home against the Flames to secure a hard-fought three-point win. Bursting out of the gates in the first quarter the Eagles were forced to play catchup against Norwood and did just that with a scintillating third term proving to be the game changer. Slotting 22 points to 12, Forestville did enough to get back into the contest and maintain that level of momentum for the remainder of the game. Star recruit Alex Wilson was impressive for the Flames recording a triple double thanks to her 21 points, 12 rebounds and 10 assists. Genna Anderson was handy with 15 points and 11 rebounds as Paige Kennihan made her presence felt thanks to her 15 points. Samantha Simons was the lead scorer for the victors contributing 19 points and 12 rebounds. In her 37 minutes on court Jordyn Freer sunk 17 points while Aimee Brett was influential with her 12 points and seven rebounds.

South Adelaide Panthers made it two wins straight to remain undefeated while the Mavericks are yet to register a win so far this season. The Panthers put in the hard yards from the opening buzzer and did not let up throughout the game winning every quarter and pressing hard defensively to nullify the influence of the Mavericks. Four players from South Adelaide made it out of single digits as Olivia Thompson dominated with a game-high 27 points in her 25 minutes on court. It did not stop there for Thompson who also reeled in 17 rebounds, 13 of which were defensive. Ashley Spencer complemented her with 19 points as Teresa McGreehan sunk 15 points in her 20 minutes. Hannah Stewart was the other able to effectively hit the scoreboard producing 14 points. Mollie McKendrick was the key cog for the Mavericks draining 21 points at 50 per cent from the field to accompany her 12 boards as Chloe Dumesny and Kedeisha Kartinyeri slotted 17 points apiece.

The Tigers did just enough to get over the line against West Adelaide securing a six-point win. A fast start set them up nicely for the game but panic started to set in throughout the second term as the Bearcats put the clamps on, shutting down the Tigers’ rhythm in attack and limiting them to a mere nine points for the half. But despite their best efforts the damage had already been done with Morgan Yaeger sinking 14 points for the winners. Teige Morrell and Jemma Thacker were other key contributors, while Sky Langenbrinck impacted the play with her nine points as Jennie Rintala got busy with her seven.

It was a one-sided affair with Sturt Sabres holding no prisoners and making an absolute meal of Central District Lions despite their best efforts. They simply had no answers for the Sabres who exposed them on every front and flexed their muscles in offence to pile on 134 points while keeping their opponents to a mere 39 for the game. The Sabres best quarter was the fourth and while it was not their most proficient managing 33 points as opposed to the 38 they scored in the opening they limited the Lions to a mere four. Madelyn Curry led all comers with nine points with Meaza Otto and Casey Banwell hot on her heels for Central District producing seven points apiece. Samantha Kennett was handy both on the points scoring and rebounding front with six and six respectively. Jade Johnson seemed to bring her own ball to the game sinking a game-high 38 points at an impressive 79 per cent while teammate Kylee Smith was a livewire draining 25 points along with seven rebounds and six steals. Other considerable efforts from Meg Prosser, Jasmine Rigoni and Lauren Gibbons proved enough to get the side over the line.

North Adelaide Rockets made light work of Woodville Warriors claiming a 31-point win to hold onto to their undefeated mantle. Hitting the scoreboard with a sense of urgency in the opening term thanks to a 28-point to 12 term, the Rockets had the upper hand heading into the first change and maintained that dominance throughout. Their highest scoring quarter came in the last where they really put the nail in the coffin. Taylor Ortlepp, Rachel Mate and Sam Defrancesco proved that 20 was the magic number as they all recorded 20 points apiece in the win. Jess Good was the other livewire reeling in a staggering 22 rebounds. Emily Winter and Chloe Purvis both contributed 18 points to the Warriors’ total, as Winter dominated off the boards with 20 rebounds.