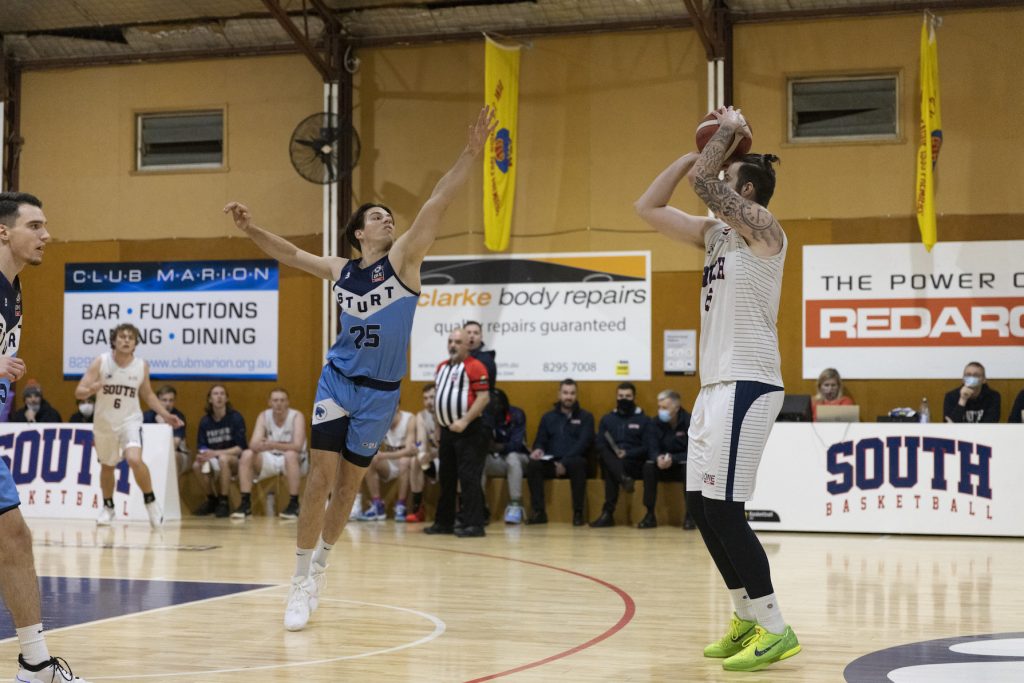 THE home and away season of the National Basketball League (NBL1) Central has run its course with the final round producing plenty of tantalising results.

The Flames got over the top of Central District Lions by 18 points thanks to a blockbuster opening term of action. Norwood imposed themselves in the opening quarter piling on 37 points to 18 and while they dropped off in the second and third term managed to regain their composure in the final to run out victorious by a comprehensive margin.

It is no surprise that CJ Turnage once again dominated for the flames producing 35 points shooting at 67 per cent from the field, while he also reeled in five rebounds, six assists, two steals and a block. Teammate Ray Harding was also amongst the best out on court for the flames with his 24 points, five rebounds and six assists while Anthony Green also got busy with 13 points and eight rebounds. For the Lions it was Shaquille Maharaj that dazzled with his 39 points, five rebounds and two steals. Lual Diing also got busy with 18 points and seven rebounds as Ayual Garang slotted 12 points in the loss.

The Flames asserted their dominance over Central District Lions with the romping 49-point win. It was a one-sided affair for Norwood as they completely dominated in the opening half and while scoring dried up a bit in the second half the game was already over.

Alek Akuen starred with 22 points and 12 rebounds in the win while teammate Genna Anderson also chimed in with 21 points and 10 rebounds. Tara Girardi worked hard for her 18 points shooting at 58 per cent from the field. Meaza Otto was the most dominant shooter for the Lions with her 10 points as Shelbi-Lee Sutcliffe got busy with eight points in 16 minutes.

The Sabres snuck over the line against South Adelaide Panthers by seven points. It was an even contest throughout the game with the Panthers holding the lead at quarter time but that was quickly switched by half time with Sturt going up by a couple of points. From there on out Sturt were able to maintain control and worked in overdrive to keep their noses in front.

It was a hard fought battle between the Panthers and the Sabres but in the end it was Sturt that was able to come away with a narrow six-point win. The Panthers held the lead at quarter time but Sturt managed to turn the tables as the game went on.

Hannah Stewart was the most dominant shooter out on court for South Adelaide registering 12 points and nine rebounds, all of which were defensive. Olivia Thompson chimed in with a handy nine points in her 24 minutes of action as Jordan Hunter also registered nine points. Tayla Brazel was a key cog for the Sabres with her 17 points while teammate Kylee Smith found her stroke sinking 15 points and an impressive 11 rebounds.

Southern Tigers secured the win over Woodville Warriors by 12 points in the final round. The Tigers led from the opening quarter and did not look like relenting on that pressure, steadily building their margin. Although the Warriors fought back in the third term the Tigers found another gear to kick into in the fourth.

Nick Wurm impressed with his 24 points at 56 per cent from the field as Machar Machar was hot on his heels with 23 points. Koop McCalop was in fine form for the Tigers producing 14 points, seven rebounds and three assists. For the Warriors James Boonstoppel topscored with his 20 points and five rebounds as Joe Jackson also chimed in with 18 points and 15 rebounds.

It was all one way traffic in the match between the Southern Tigers an Woodville warriors with the former claiming a romping 47-point win. Holding the lead at quarter time the Tigers only went on to further impose themselves on the contest with a 25-3 term to really showcase their dominance.

Once again it was Teige Morrell that displayed her star power with 18 points in just 16 minutes while she also recorded an impressive 14 rebounds, two assists and one steal. Bianca McCalop was not shy sinking 12 points and six rebounds as Abby Beeche added a handy 10 points to the total. Emily Bartsch worked tirelessly for the Warriors with her eight points and five rebounds as Deanna Troia had a well-rounded game finishing with six points, nine rebounds and a steal to her name.

Forestville Eagles flexed their muscles against West Adelaide claiming a 23-point win. The Eagles raced out to a handy 11-point lead at quarter time and maintained that pressure throughout the second quarter to open up a 22-point margin. Although the Bearcats tried to work their way back into the contest the Eagles closed the door in the final quarter.

The Forestville Eagles continued their hot form notching up another win, this time over West Adelaide Bearcats. They led from the opening term and did not look like giving up outscoring the Bearcats in every single quarter.

Jennie Rintala was the number one scorer out on court for West Adelaide producing 20 points along with an impressive 16 rebounds with an even split between defensive and offensive. Keeley Pearce also made her presence felt registering 17 points in her 33 minutes out on court while Jasmine Fejo was the only other player to reach double figures with her 12 points. For the Eagles it was Brooke Basham and Samantha Simmons that once again combined to lead the way. Simmons finished with a triple double including 25 points, 11 rebounds and 10 assists. Cara Annetts also made a splash with her 18 points and nine rebounds.

It was a high-scoring spectacle between the two sides as the Rockets powered home to win against the Mavericks. North Adelaide made all the early running and while things tightened up in the middle two quarters an explosive final term gifted them the win.

Tom Cromarty was an undeniable force for the Mavericks sinking 34 points at 52 per cent from the field while he also registered nine assists and three steals. Matt Stock did not muck around slotting 24 points and four rebounds while teammate Diing Lual was impactful with his 17 points and whopping 14 rebounds. Jack McVeigh led the way for the Rockets draining 26 points and 13 rebounds, 11 of which were defensive. Jimma Dau fired on all cylinders with his 23 points and 13 rebounds as Tobias Dowdell produced 15 points and six rebounds.

There was another close tussle between The Mavericks and north Adelaide with the latter getting over the line by 13 points. By half time the Rockets were up by a handy six points and continued that trajectory throughout the second half to secure a convincing win.

Mollie McKendrick continued her merry way for eastern Mavericks with a team high 23 points along with seven rebounds and eight steals. Rachel Hines was not far off the pace draining 20 points and 12 rebounds in the loss. For North Adelaide it was Taylor Ortlepp that dominated credit to her 32 points, six rebounds and six steals. Jess Good also found her rhythm sinking 17 points and eight rebounds all of which were defensive.

In their second game for the round the Flames fell to the West Adelaide Bearcats by a mere eight points. It was the Bearcats first win for Round 18 and while the Flames held to sway for the opening term that momentum was short lived. Opening up a six point buffer at quarter time the flames looked to be in control but West Adelaide kicked into gear and capitalised in the remaining three quarters to run rampant.

Harding and Turnage once again combined to be the powerhouse duo for Norwood recording 23 points and 21 points respectively. Green was the next best with 14 points and 10 rebounds. Fabian Johnson impacted for West Adelaide securing 26 points while Cadzow was hot on his heels with 21 points and four rebound. Ross managed 18 points and an impressive twelve rebounds in the win.

Taking the court for the second time in as many days it was Norwood flames that managed to grind out the game against West Adelaide. It was a hot in your mouth finish with the game entering into extra time given scores were all tied up at the end of full time. But it was Norwood that were able to find another gear to kick up into and secure the hard fought win or be it by four points.

After a quiet performance earlier in the round Alex Wilson well and truly asserted her dominance with 32 points and staggering 18 rebounds along with nine assists, four steals and three blocks in what was an all-round dominant performance. Anderson worked hard for her 17 points and eight rebounds while Girardi managed 11 points. Rintala was once again best on court for the Bearcats thanks to her 25 points as Fejo finished with 14 points to her name in the loss.

North Adelaide Rockets clinched a 10-point victory over Southern Tigers to cement their spot in finals. the Rockets came out with a point to prove pouring on 20 points to eight in the opening term to claim the ascendancy. Although the Tigers clawed their way back into the contest they left their run a little too late.

Verle Williams was a force to be reckoned with draining 19 points, six rebounds, four assists and four steals in the win while Dau was the next best with 18 and a huge 15 rebounds. McVeigh was no slouch with his 17 points and eight rebounds while Christian Artacho topscored for the Tigers with his 18 points and Cameron Coleman slotted 15 points in the loss.

The final game of the round went the way of North Adelaide Rockets as they sealed the deal with a strong 24 point victory. The Southern Tigers struggled to get their game up and running caught on the back foot in the opening quarter and were further exposed in the second term thanks to a 21 point to 11 quarter.

Ortlepp was influential once again draining 22 points, six rebounds, four assists and two steals while 15 proved to be the magic number for Good and Sam Defrancesco who managed 15 points apiece in the win. Morrell was a commanding force with her 16 points and 18 rebounds as Jemma Thacker chimed in with 11 points in the loss.