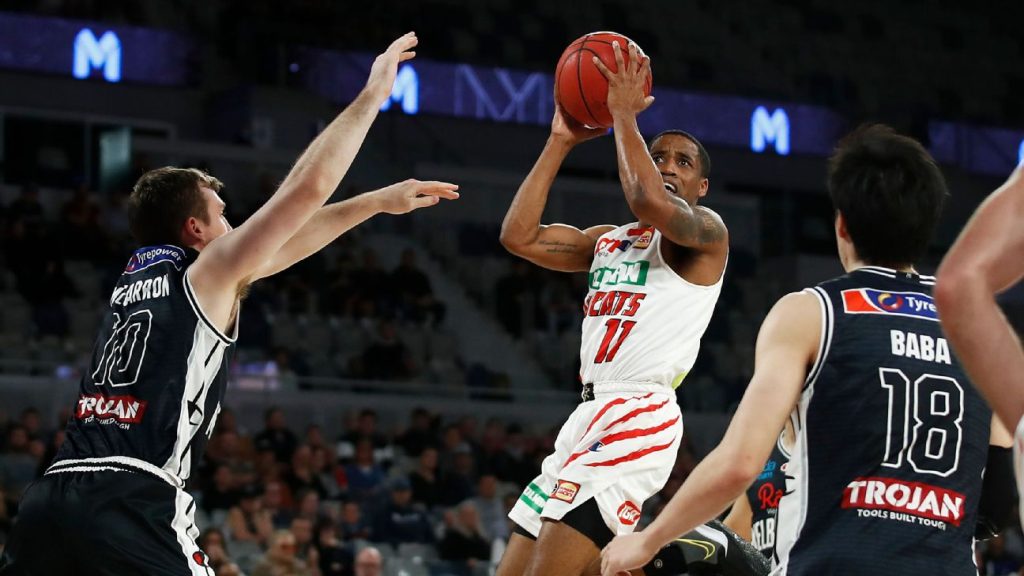 THE final round of the National Basketball League gets underway tonight in a top of the table clash between Illawarra Hawks and Perth Wildcats. That will not be the only top four clash as United and Perth go head to head in what is set to be a ladder-defining clash.

It is set to be a cracking game as the third placed Hawks take on the second placed Wildcats who are on the same wins as United and are looking for their way to come out on top. They will be eager to topple Illawarra and if they can manage to string together a dominant four quarter performance will take top spot -albeit momentarily until United take the court.

The combination of Tyler Harvey and Justinian Jessup will have to be at its damaging best when Illawarra take on Perth. Both Jessup and Harvey are renowned for their ability to keep the scoreboard taking over but will need additional support from the likes of Sam Froling, Cameron Bairstow and Justin Simon. Harvey averages 20.24 points a game while Jessup is also a handy feature with 13.39 points a game. Looking at the Wildcats and it is hard to go past Bryce Cotton who has been in scintillating form. The guard can simply do no wrong with his ability to sink the match winner time and time again. He averages 23.47 points while teammate John Mooney is a real livewire putting up impressive numbers both on the scoreboard and on the rebounding front thanks to his 17.74 points and 11.47 rebounds. It would be remiss not to mention the likes of Todd Blanchfield and Mitch Norton with the duo able to have an influence in defence and offence

The bottom of the table battle will be a hot one as the Breakers have found some form at home with the home crowd really spurring them on to grind out games. New Zealand are on the hunt for their 12th win of the season, while the Taipans have shown strong glimpses but faded in times of need. It is not possible for Cairns to work their way off the bottom of the ladder but will be eager to take some positives out of the end of their season.

Scott Machado is the main facilitator for the Taipans and will need to be at his damaging best if his side are any chance of causing an upset. Machado boasts an average of 15.61 points and 6.97 assists a game bringing the likes of Mirko Djeric and Jordan Ngatai into the game. Djeric might only average 8.47 points and 2.25 rebounds but his presence out on court is key.  The Breakers have no shortage of excitement machines with Levi Randolph a key addition to the side since joining. He averages 15.85 points and 3.77 rebounds a game playing a strong role alongside the likes of Tai Webster and Finn Delany. Webster tops the table with 16.63 points a game while Delany is not far behind credit to his average of 16.35 points and 6.62 rebounds. Another key addition to the side has been William McDowell-White who has not skipped a beat and will be eager to keep putting his best foot forward in this performance against the last placed Taipans.

To put it plain and simple, South East Melbourne Phoenix need to win if they want to hold onto fourth spot. Currently just holding on by a thread, the Phoenix will be hoping that their big three in Mitch Creek, Keifer Sykes and Ryan Broekhoff are able to stand up to the challenge and make their dreams a reality. On the other hand the Bullets are not far off the pace sitting outside the top four by two games and will have three opportunities including this match to edge inside and make a play for finals. however they will need a host of results to go their way including a win here.

Creek is a real playmaker for the Phoenix with his ability to hit the scoreboard and lend a hand in defence as shown through his 18.06 points and 6.45 rebounds. Sykes is another piece of the puzzle that will have to be on his a-game given he averages 13.67 points and 5.33 assists each time he steps out on court. Kyle Adnam has quickly become a fan favourite, making the step up this season and asserting himself credit to his 12.61 points and will want to ply his trade in this match-up against the Bullets. Throw in support from the likes of Yannick Wetzell and Ben Moore and the Phoenix are in good shape. But Brisbane are not backwards in coming forwards with Nathan Sobey an integral member in the side. The captain is never out of the contest averaging 21.34 points a game plus 4.47 rebounds and 4.56 assists often leading his troops to success. Lamar Patterson has landed on his feet since re-joining the Bullets with the bigman posting numbers of 13.62 points and 4.54 rebounds while Matthew Hodgson and Anthony Drmic are other players the Phoenix will need to keep an eye on throughout the clash.

This game will bring plenty of excitement and nerves for players and fans alike as the Hawks take on the Kings at home. The Sydney Kings are renowned for their class and ability to do the unthinkable and will need to recapture that form this match. outside of the top four by one game, expect the Kings to leave no stone unturned and apply some real heat on the teams around them.

The Hawks will be backing up from their earlier performance with Jessup and Harvey hoping to keep the good times rolling. But the Hawks will have their work cut out for them given the Kings boast the services of dynamo Casper Ware. Throw in the likes of Jarell Martin and the Kings have a dominant two-pronged attack with Ware averaging 18 points and Martin with 17.35. Xavier Cooks has been lively since returning to the fold and will be hoping to continue on that trajectory while Jordan Hunter and Craig Moller are other viable options to attack the rim or reel in the boards.

Melbourne will take to the court for the second time this round and with pole position still up for grabs will need to put out a consistent four quarter performance to topple the 36ers. But Adelaide will be hoping to end their season on a high and still have an influence on how the finals go down by causing a major upset.

Adelaide have had an inconsistent season to say the least and have been plagued by injury but have a number of players able to step up and take charge. Daniel Johnson has been a mainstay for the 36ers producing impressive numbers credit to his 19.51 points and 6.97 rebounds while Brandon Paul has been a commanding force thanks to his 13.68 points. Isaac Humphries is steadily returning to form after his time on the sidelines with injury while Tony Crocker will have to be on top of his game to worry United.

One of just many mouth-watering clashes this round, the match-up between Melbourne United and Perth Wildcats is sure to go down to the wire. Melbourne will be praying that fatigue becomes a factor as Perth enter their second top four clash in as many days, while the home side will be fresh and raring to go. Expect both sides to throw everything they have at their opponents and contest every second of the game in what is set to be an absolute show stopper and potential grand final preview.

Both sides will be competing in their second game for the round and all eyes will turn to the Phoenix and what they can do? Whether they can front up after a game earlier in the week against the Bullets. Although the Breakers are significantly lower on the ladder they have shown they have the class and skill to compete with the best in the business meaning the Phoenix will need to be on their a-game.

It is a must win game for the Kings. In fact it all hinges on whether or not they secure the “w” because if they do not then their finals aspirations are well and truly done. The Bullets also need a win and while their chances may be a long shot it will not deter them from hustling hard. It will be a heart in your mouth style of game with both teams eager to make a last minute dash and prove themselves on the competition. The Bullets will have to front up to another game only days later and will be hoping that a win will spur them on to clinch that fourth spot.

The final game of the home and away season pits Brisbane Bullets against South East Phoenix. It will be the Phoenix’s third game of the round and while fatigue may be somewhat of an issue you can guarantee that their main focus will be winning and holding onto their top four position.