ROUND 9 rolled around in Big V Women’s with a number of blowout margins dictating the round. Sunbury also got back on the winner’s list after falling off last week with a shock loss while Hume Broncos snuck home with a narrow seven-point victory to edge their way up the ladder.

Bulleen recorded their eighth win of the season to hold firm on second spot, downing Wyndham by 12 points. The Boomers raced out to an early lead piling on 25 points to 18 and while they looked to build on that in the second Wyndham had other plans as they inched their way back into the contest. The class of Bulleen once again rose to the top as they poured on the scoreboard pressure in the third term to create a handy 13 point buffer. With the game all but over both sides engaged in a bit of back and forth and while Wyndham outscored their opponents in the final term, it was the Boomers that ran out with the win.

Nicola Handreck proved to be the go-to girl for Wyndham as she top-scored with 18 points, seven rebounds and three steals in a strong performance. Teammates Courtney Midapp and Georgia Taushke also got involved in the play with 16 and 12 points respectively as the latter also racked up eight defensive rebounds. Jessica Scannell worked hard for her eight points but could have been more accurate only converting at 25 per cent from the field. Looking at the Boomers and it was another scintillating performance from Rebecca Cole as she dominated credit to her 33 points. Cole was a real menace and while she lacked the accuracy sitting at a 39 per cent clip she was not denied opportunity as she spurred her side onto victory. Cole also picked up 11 rebounds as Kate Gaze also got busy for Bulleen thanks to her 21 points with her long range shooting on point draining three of her four attempts. Louella Tomlinson recorded another double-double producing 13 points and 10 rebounds all of which were defensive.

Hume Broncos prevailed in a hard slog against Hawthorn with both sides struggling to generate much scoreboard power in the first half. Both sides struggled to find the basket in the second quarter with nine and five points scored respectively in a relatively low scoring affair. However, scoring freed up in the second half and while the Magic were the first team to strike it was short lived as the Broncos came to play in the final term piling on 23 points to 14. They showcased plenty of grit and determination to work their way back into the contest and steal the win.

Jessica Azzopardi was the main influence on the scoreboard for Hume sinking 15 points while also picking up six rebounds and four steals. Tashia Overby plied her trade registering 12 points as Sophie Byrnes was influential draining 11 points of her own in the win. Although Hailey Wynd was not as productive on the scoring front finishing with seven points she showcased her strength off the boards with 11. For the Magic it was Bella Niven-Brown that forged the path stacking on 16 points at 54 per cent from the field. She fell just short of a double-double amassing nine rebounds while teammate Ella Crump also got busy with 12 points. Sian Gallam was the only other player to reach double-digits credit to her 10 points.

It was a comprehensive victory by Casey who ran rampant against the struggling Southern Peninsula to secure a 56-point win. It was a one-sided affair as Casey controlled proceedings from the get-go leaving the Sharks looking for answers. Casey rendered the Sharks to 15 points or below every quarter while they did not drop below 26 points, a clear testament of their attacking nous and skillset. Their best quarter came in the last when the home side notched up 27 points while putting the clamp on their opponents to keep them to a mere 11.

Once again it was the Shereesha Richards show as she drained a whopping 36 points at 56 per cent from the field. Richards was a real livewire, setting up a wealth of attacking forays as shown through her 13 offensive rebounds and backing herself at every opportunity. Her defensive tendencies also came to the fore as she pulled in four additional rebounds and racked up four steals. She received plenty of support from Rachel Bell, who well and truly found her groove thanks to her 29 points and nine rebounds as Georgia Koopmans was no slouch with her 20 points. Myra Wood was the only Sharks player able to get out of single-digits piling on 10 points while Ashleigh Wright and Jayde Popovski worked in overdrive to produce nine points apiece. Tanarly Hood was quiet by her lofty standards recording eight points, five rebounds and four assists.

McKinnon notched up yet another win, as Whittlesea sit anchored to the bottom of the ladder going down by 39 points. It was McKinnon’s game to lose given they sit higher on the ladder and all expectations were on them and they did not disappoint, coming out with a real pep in their step from the opening buzzer. McKinnon won every single quarter and really flexed their muscles in the third when they sunk 20 points and kept the Pacers to a mere seven. Although Whittlesea showed some grit in the fourth stanza to only go down by two points (14-12) the game was all but done.

The scoring load was well shared amongst a trio of players for McKinnon with Tegan Cunningham, Tara Bruno and Hana Bektas all making their presence felt. Cunningham led the way with a team-high 21 points and did so at an impressive accuracy rate of 73 from the field. Cunningham also managed seven rebounds in her outing as teammate Bektas managed 18 points and 13 rebounds to walk away with a double-double. Bruno notched up 16 points while Amelia Todhunter did not have the same impact finishing with just seven points, four rebounds and five steals in the win. Lyndsey Hoogenhout once again stepped up to the plate for the Pacers despite the disappointing loss racking up 12 points and a whopping 15 rebounds. Emily Verey also got busy with 10 points in her 25 minutes on court while Saule Kontautaite was solid

The final game of the round saw Sunbury topple Keilor Thunder by 28 points. After a relatively even start to the game which saw Keilor up at half time Sunbury shifted gears in the second half determined not to drop their second game in a row. In fact the Jets blew the Thunder away limiting them to a mere 17 points while they stacked on a whopping 47 points of their own. It was a game of two halves with the Thunder unable to combat anything the Jets threw at them.

Keilor spread the love when it came to points scorers as Bianca Babic, Emily Suckling and Ellen Kett all plied their trade. Babic finished with a team-high 14 points as Suckling slotted 12 and Kett managed 10 to accompany her eight rebounds and seven assists. For the Jets the combination of Jacinta Beckley and Bianca Dufelmeier worked wonders as they produced 19 points apiece. Beckley shot at 47 per cent from the field and also recorded nine rebounds and four assists as Dufelmeier shot at a 55 per cent clip and walked away with six rebounds to her name. Tess Barnes was a helping hand contributing nine points to the Jets’ winning score while Orla O’Reilly also chimed in with eight points, eight rebounds and eight assists.

The upcoming Round of Big V is set to be an enthralling one as Hawthorn and Bulleen lock horns while the clash between Hume and Whittlesea will draw plenty of attention with the latter still on the hunt for their first win. Wyndham and Keilor will battle it out as Keilor look to get back on the winners list as a tantalising clash between top of the table and third placed Casey is set to ensue. The final game of the round sees McKinnon take on Southern Peninsula who will be hoping to bounce back after a disappointing loss.

IT was a big return to the Big V Women’s competition after three weeks off, with the 10 teams recommencing hostilities last weekend. Three of the five games were decided by double-figure points. Casey (68) defeated by McKinnon (76) McKinnon Cougars added some distance on its rivals in an eight-point victory over Casey Cavaliers. The […]

AFTER a three week break due to the Victorian lockdown, the Big V was back in action for Round 19 and there were two games decided by single-digit points and a couple of big blowouts. Casey (82) defeated by McKinnon (93) In a battle between two top four sides, McKinnon held off a determined Casey […]

ROUND 16 of Big V Women’s saw some exciting matchups across the round with one game decided by less than five points, and the rest playing host to a couple of blowouts. Hawthorn (63) defeated Whittlesea (61) It was a tight encounter between Hawthorn Magic and Whittlesea with the Magic just scraping over the line […]

AT the end of Round 16 of the Big V Men’s competition, there were a number of surprise wins and losses that unfolded over the weekend. Chelsea (84) defeated by Hawthorn (121) Chelsea was overpowered and came unstuck as they were unable to hold off a dominant Hawthorn side. Hawthorn immediately took the lead in […]

ROUND 15 of the Big V Women’s saw a couple of surprise results with Sunbury handed their second loss of the season while Bulleen prevailed in a tight one. Unfortunately Whittlesea failed to notch up their first win for the season, handed a hefty loss. Southern Peninsula (64) defeated Hawthorn (61) It was a close […]

ROUND 15 of the Big V Men’s competition saw a number of close calls and surprise results, as Keilor were handed a narrow loss while the second placed McKinnon closed the gap by securing a hard-fought win. Wyndham (89) defeated by McKinnon (94) McKinnon got the chocolates over Wyndham by a mere five points in […]

THE Big V Women’s returned this week after a couple of weeks off due to the COVID-19 restrictions in Victoria and it did not disappoint. There were a couple of big results as Sunbury and Bulleen continued their winning ways. Southern Peninsula (52) defeated by Keilor (66) Keilor Thunder picked up where they left off […]

BIG V returned this weekend after a month long COVID-19 enforced hiatus and Round 14 did not disappoint. There were a number of blowouts with Keilor almost doubling their opponents score while it was much closer between Hawthorn and McKinnon. Chelsea (106) defeated Western Port (78) Chelsea raced out of the blocks with a 29 […] 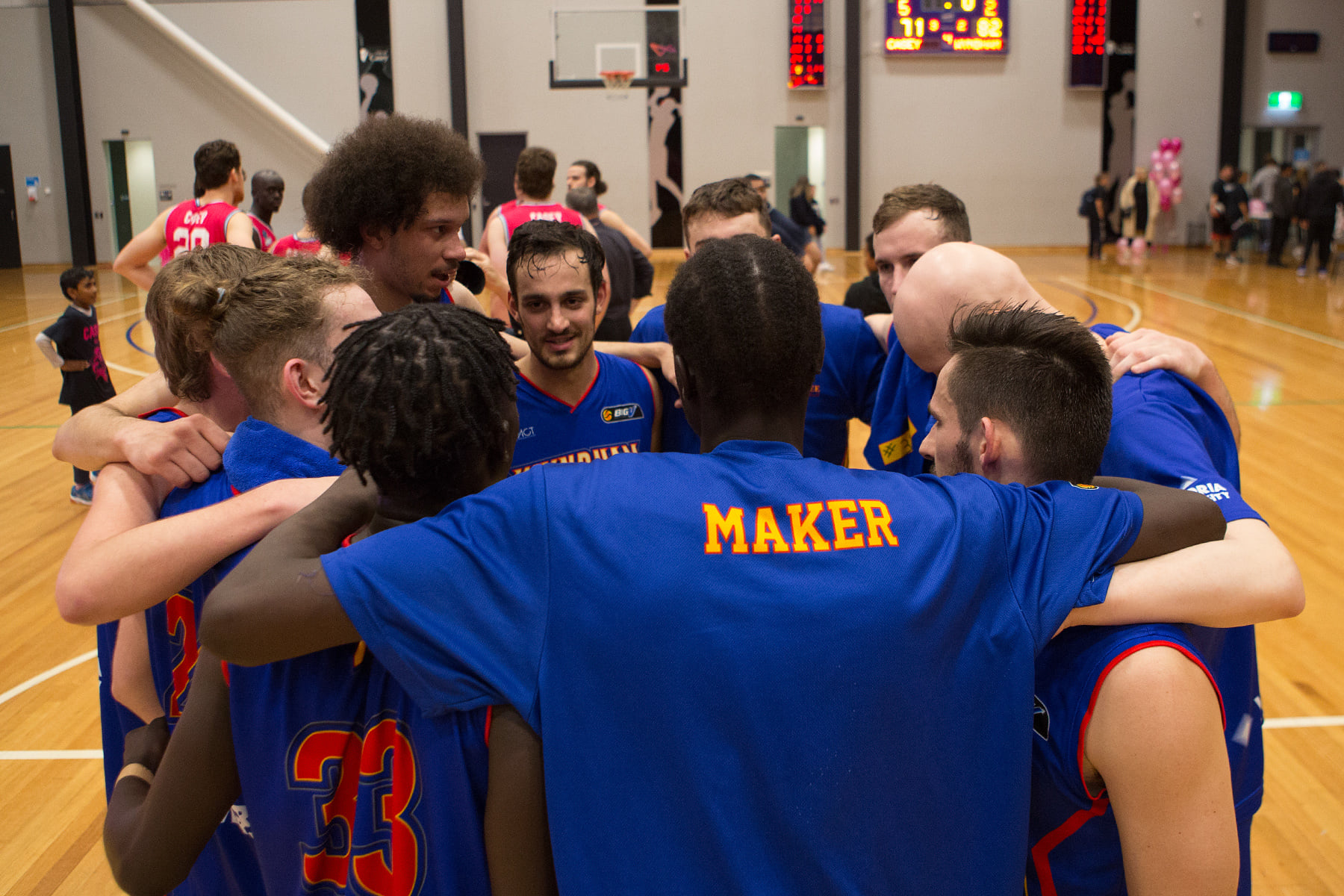 ANOTHER Round of Big V rolled around as the top of the table Thunder continued their winning ways as did Wyndham. McKinnon were handed a loss off the back of some strong work from Hume Broncos while Blackburn and Western Port continue to linger at the bottom of the ladder. Hawthorn (80) defeated Sunbury (67) […]