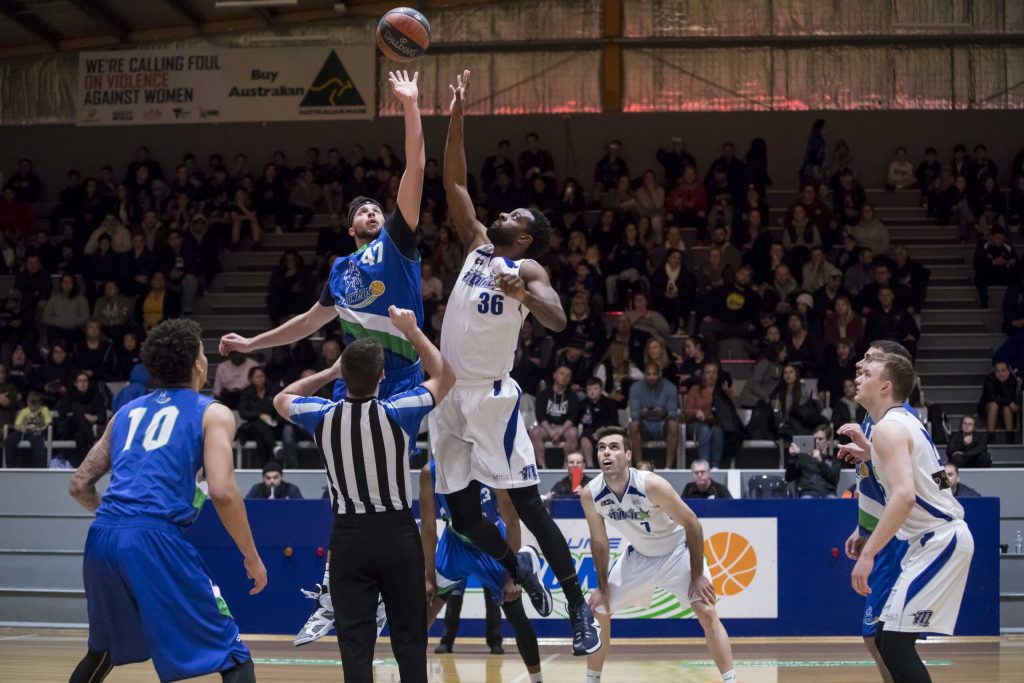 ROUND 2 of the Big V Men’s is set to be a thriller as a number of sides look for their first win of the season meanwhile the remaining teams will be hoping to make it two from two and claim some early ascendancy. Sitting on one win apiece Sunbury and Wyndham will fight it out in the final game of the round as the winner from the Hume and Blackburn battle will walk away with their first win of the season.

After going down to McKinnon the week earlier despite holding the lead at half-time the Thunder will be keen to make amends for their shortcomings and get on the winners list in their outing against Western Port. Both sides have a number of exciting prospects that are able to dictate the terms of the game and will have to be at their best if they are to secure the win.

For Keilor it will be up to Nicholas Masunda to keep the good times rolling after producing a game-high 24 points last week. Charleston Long is another one to keep an eye out for with the Thunder player managing to contribute 18 points to the scoreboard last week and surely chomping at the bit to deliver the goods once again. Matt Spencer had an almost game in Round 1 so expect him to come out firing alongside the likes of Mitch Lukey.

Both sides are going into this matchup searching for their first win with Hume narrowly suffering defeat last round by a mere point while Blackburn went down by 16 points. The Broncos will be ruing their missed opportunities and will be eager to secure their first win with a strong showing against Blackburn. On the flipside, the Vikings will be keen to make a name for themselves and solidify their connections across the court in hope to register a victory.

Mackuei Puondak got his campaign off to a scintillating start producing a whopping 27 points in game one and will be aiming to keep that attacking momentum going in Round 2. Puondak also proved his worth off the boards finishing with 12 rebounds a feat he will be hoping to replicate in order to get his side the win. He was ably assisted by the likes of Shayan Mahboobi (21 points and seven assists) and Joel Rimes (14 points) with the trio set to be firing in their upcoming clash. Jake Martin is also set to make his long awaited return to the side to further bolster Hume’s stocks. It will be a case of shutting down Bul Niop for the Broncos, as the Vikings player constantly popped up in Round 1 to produce 25 points and seven rebounds. Teammate Jah Soloai will be the other livewire able to hit the scoreboard with relative ease while Mark Berezdecky has proven to be a menace off the boards and could pose a threat to Hume.

McKinnon are coming in off a roaring win thanks to a demolition 46-point third term, something Chelsea should be acutely aware of heading into their Round 2 match. down at half-time, McKinnon dug deep to not only steal back the lead but do it in convincing fashion showcasing their ability to blow opposition teams out of the water. Chelsea fell victim to Sunbury last week, meaning they are still searching for their first win of the season but will have their work cut out for them against a side that is filled with belief and confidence.

McKinnon did not rely on the services of just one player, instead there were a number of stars across the court that were able to effectively ply their trade and make a difference, none more prominent than Nic Laycock. He starred with an impressive 27 points but even if Laycock is shut down, Jordan Geer is still a dominant threat having posted 21 points. In his second game for his new club, expect Luke Shelley to maintain his high production rate while James Malvaso is also an exciting option. Chelsea will look to the combination of Corey Standerfer and Lachlan Anderson to steer the ship in their clash against McKinnon with the duo producing 24 points and 10 rebounds.

Casey secured the narrowest of wins in Round 1 and will be riding a wave of confidence knowing that they can prevail in tight encounters. This ability to grind out games and skill to not crack under pressure will set them in good stead against Hawthorn as they look to keep their unblemished start to the season intact.

Casey have a number of viable options that are able to inflict pain on the scoreboard with five players hitting the double-figure mark in Round 1 while their overall rebounding ability is a clear strength of the side. Matt Donlan was the danger man in the opening round meaning, Hawthorn will need to put a lot of work into him to stop him given he is coming off a 26-point and seven-rebound outing. Ben Waterhouse proved to have ice in his veins last game and will be looking to be at his damaging best once again while teammates Ben Gaspar, Angus Howey and Anthony Williams are other notable figures in the Casey outfit.

Sunbury and Wyndham made their presence felt, kicking off their campaign with strong wins and march into Round 2 with a battle on their hands. This game will be no different with the two teams looking to make it two-zip and create some ladder separation. Wyndham overcame their quarter time deficit to fight back and steal the lead last week, while Sunbury lead from start to finish showcasing both sides ability to win making for an enthralling contest.

The accuracy of Nathanael Coory is what makes him such a damaging product for Wyndham topping the leaderboard with 29 points at 79 per cent from the field. He proved to be a real game changer when given enough time and space, so expect Wyndham to put a lot of work into nullifying his influence. Nathan Baker and Jayce Beasley are others to keep a watchful eye on given their ability to keep the scoreboard ticking over at a relatively efficient rate for the Jets while Trevon Clayton put on a masterclass off the boards with 12 rebounds. Wyndham will look to a trio of stars to produce the goods against the Jets as Stefan Pomasan impressed with 17 points last round. He alongside Jesse Harbeger and Aaron Dolny could be a lot to handle.