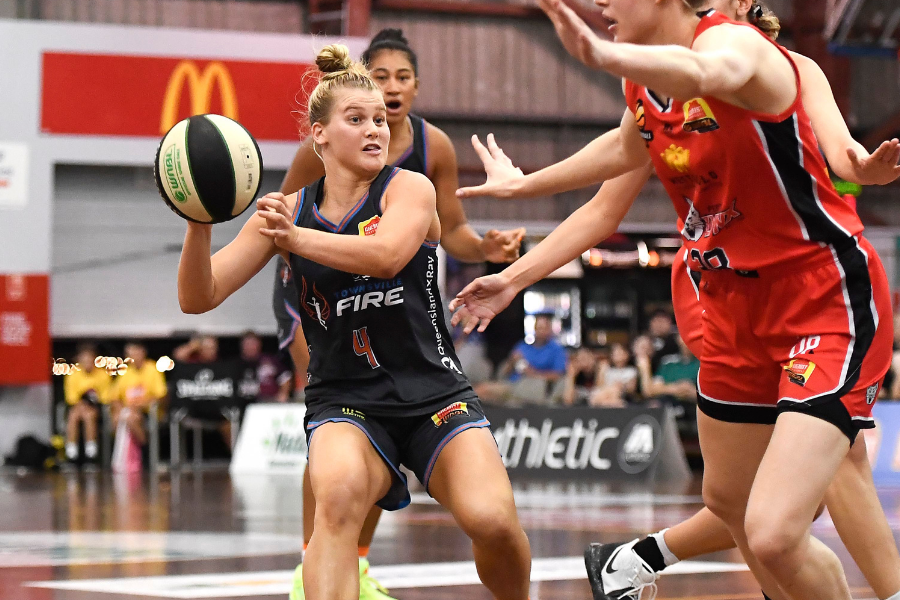 IT has been a particularly strange week in the Women’s National Basketball League (WNBL), but not just because the season itself has had to be condensed and Round 2 be a 13-game round over six days.

Due to the ever-changing climate in regards to the COVID-19 pandemic, the Adelaide Lightning have been forced to isolate until Monday under State Government regulations following the cluster in South Australia. While it means the Lightning will miss the three games – and the WNBL will no doubt announce what will happen in regards to their clashes with Southside Flyers, Sydney Uni Flames and Sunday’s match with Melbourne Boomers – it will throw up another challenge for the players and staff alike. In this weekend preview, we will preview the other four games set to go ahead.

In case you had not seen the fixture, that is not a typo, the two sides face off back-to-back over Saturday and Sunday in what will give fans plenty of information about the teams going forward. The Fire are at home – even when they are away – and so far have impressed even in their losses. Townsville went down in narrow defeats to the benchmark sides (UC Capitals – 11 points and Southside Flyers 12 points), in which coach Shannon Seebohm can take plenty of solace from knowing they are not too far off the mark. Considering this was the side that finished on the bottom of the ladder, the Fire are genuinely looking like a finals team.

In our season preview, we believed the Fire could make the finals, and crunch wins over Perth Lynx (25 points) and Sydney Uni (three points) have the North Queensland team at 2-2 after two rounds. They have won the games expected of them, and lost the ones no one would have predicted they do. The two matches against Bendigo fall into the latter, and if the Fire are to make finals, they need to come away with a 3-1 round record and a 4-2 season record with eight matches to play.

On the other hand, Bendigo just need a win, having lost all four games to start the season. The Spirit went down to Southside Flyers (42 points), Sydney Uni Flames (37), UC Capitals (20) and Perth Lynx (13) in some pretty ugly reading. The only positive in that line is that they have trended upwards and been more competitive each game. Given the difficult situation of playing a third and fourth game this round – and back-to-back against the same opponent – it will be more about which team can manage their players better to get the best possible outcomes.

Much has been talked about Townsville Fire’s back court duo of Lauren Nicholson and Shyla Heal. The taller and more experienced Nicholson has put up a team-high 18.4 points, 3.8 rebounds and 1.0 steals per game, whilst Heal has been the facilitator, not only averaging the 15 points and 3.3 rebounds, but also four assists per game as well. However it is worth noting Steph Reid’s work coming off the bench and contributing 9.3 points, 2.8 rebounds, 2.5 assits and 1.3 steals has made her incredibly valuable.

In terms of Bendigo’s back court, Tessa Lavey (11.3 points, 6.3 assists, 3.5 rebounds and 1.3 steals) has unsurprisingly been a star, but she needs support, with Jennie Rintala (5.3 points, 4.3 rebounds) and Amelia Todhunter (35. points, 3.3 rebounds and 2.0 assists) the others involved in that trio that need to step up against the in-form Fire guards.

In the front court, Carley Ernst has been sensational for the Spirit, racking up 18.3 points, seven points, and one assist, steal and block per game thus far. Mary Goulding has provided good support with 6.3 points, 5.0 rebounds and 1.5 steals, while Alicia Froling has been the influencer of the boards with six rebounds but just the three points. Outside Ernst and Lavey, the rest of the team averaged 26.2 points compared to the duo’s 29.6, which is how the Spirit improve from here.

Townsville’s front court has not had the massive numbers, but Heal has the flexibility to role in there, while Mia Murray (3.8 points, 4.0 rebounds) and Nadeen Payne (8.0 points, 6.3 rebounds) and able to rotate in that four spot. Throw in the highly talented Zitina Aokuso who has been building very strongly over her four games with 9.5 points and 6.0 rebounds off the bench, and Townsville head into these must-win matches as favourites and it is easy to see why.

Another change for the teams and remainder of the season from this point on is the inclusion of Cairns’ Pop-Up Arena which replaces Mackay as a hub for the WNBL. In the remaining three and a half rounds, all the matches will be played in either Townsville or Cairns and the first four teams to play here are ready to go.

The Sydney Uni Flames have had the extra long break due to Adelaide not being able to play, so the Flames have not taken to the court since Tuesday, which has probably helped given they were one of only two sides to play three games in Round 1. Instead of taking on the Lightning on Thursday, they could focus their attention on UC Capitals for Saturday night, with the reigning premiers seemingly back in business. The Flames belted Bendigo Spirit in Round 1 by 37 points, but have lost to Melbourne, Southside and Townsville since, and have the other key contender in UC making it a tough few games. The Capitals on the other hand have bounced back from their shock overtime loss to Adelaide to post wins against Townsville, Bendigo and Melbourne with a good chance to go 4-1 after this game.

The Flames have had a tough draw but will be keen to bounce back after that heartbreaking three-point defeat at the hands of Townsville. Former Lynx guards, Lauren Mansfield and Alison Schwagmeyer have had good seasons, with Mansfield putting up 14 points, six assists and three rebounds, while Schwagmeyer has averaged the 13 points, four rebounds, three assists and two steals. Funda Nakkasoglu coming off the bench to give them some rest has put up 8.8 points per game, it is more about lifting the assist numbers when the starting duo are on the bench. Lauren Scherf has been building nicely at the five, averaging the 11.5 points. 6.0 rebounds and 1.8 blocks, while Anneli Maley has had an underrated season with 7.5 points ad 9.3 rebounds per game.

By comparison, the Capitals could easily be 4-0 right now had the first game of overtime gone their way, but Kelsey Griffin has returned and come off the bench for seven points, four rebounds and two steals, to no doubt be at full capacity at the pointy end of the season. Fellow co-captain Marianna Tolo has been sensational in the five spot and will have a huge clash with Scherf, having put up 9.5 points, 5.0 rebounds and 2.0 assists tis season. Mikaela Ruef has stepped up to support her up the front end of the court with almost a double-double of 11 points and nine rebounds, but it is a couple of young guns who have stolen the limelight. Maddison Rocci is in unbelievable career-best form with 17.0 points, 4.3 rebounds, 3.5 assists and 2.5 steals, while Jade Melbourne has won over a lot of fans with her games building each and every match to the point where she is one of the clear rising stars of the competition. Melbourne is up to 11.5 points and 2.5 rebounds per game, having recorded her first 20-point game last match.

In the other game, Southside also had its Round 2 schedule interrupted by the Adelaide clash being postponed, and will have only played the one game – Thursday night’s 12-point win over Townsville – since the Flyers took on the Flames last Sunday. With one game in six days, the premiership favourites will be rested and ready to go against a Perth Lynx outfit that finally broke through for their first win against bottom-of-the-table Bendigo Spirit, though they did show promising performances in their past two games against Melbourne Boomers (six-point loss) and Adelaide (five-point loss) since their disappointing 25-point defeat at the hands of the Fire.

Despite the Lynx’s improvement – which has coincided with captain Katie-Rae Ebzery finding her groove – it will take an unbelievable effort to topple the Flyers in the match. Ebzery has certainly been a strong performer since a disappointing first game, averaging 19.3 points. 4.3 rebounds, 1.7 assists and 1.3 blocks, joining Darcee Garbin (11.3 points. 6.0 assists. 1.0 steals and 1.0 blocks) as the two players to watch up either end of the court. Emma Clarke has been producing big and flying under the radar with 7.8 points, 4.3 rebounds and 1.8 assists, while bigs in Alex Sharp and Kayla Steindl have combined for 13 points and 17 rebounds in their matches.

The duo will have its hands full against the unbelievable depth of the Flyers, led by Liz Cambage is averaging close to a double-double of 20 points and 9.8 rebounds, as well as 2.8 blocks per game. Sara Blicavs (13.5 points, 8.3 rebounds and 2.0 steals) and Jenna O’Hea (12.3 points, 4.8 rebounds and 4.3 assists) have also rolled through the front court making life difficult for oppositions. In the back court, the dimes by Leilani Mitchell (10.3 points, 6.8 assists and 2.5 rebounds) and Rebecca Cole (15.8 points, 3.3 assists) have been crucial in setting up the team transition offence.

Last year’s grand finalists in UC Capitals and Southside Flyers are out tip to win their respective matches.