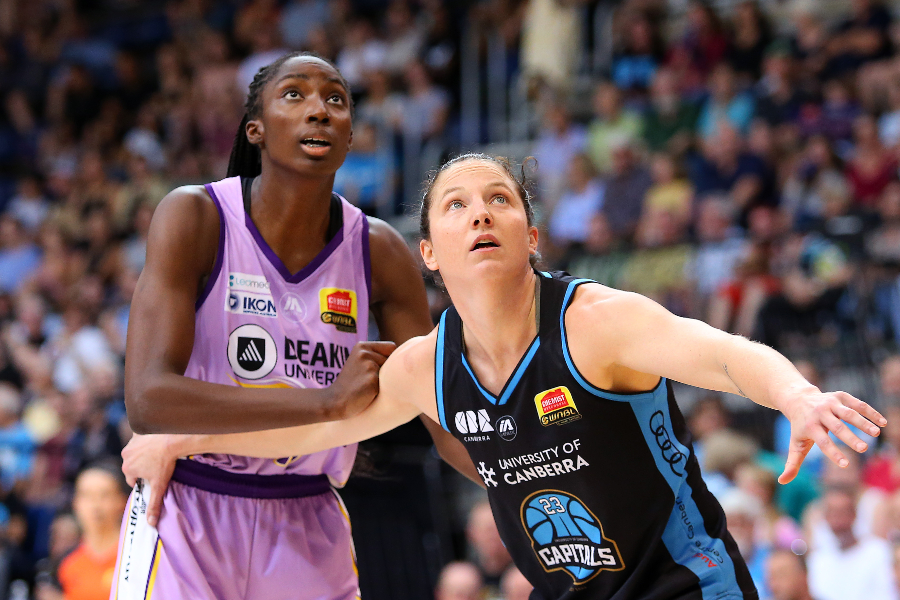 EIGHT games will be squeezed over the next four days in what will be a bumper week of Women’s National Basketball League (WNBL) action. With one round down and four more to go, teams have started to get an early feel for the action again, and a repeat of the two semi-finals from last year will take place this week across the two hubs of Mackay and Townsville.

Only one side will leave the Mackay hub winless as Bendigo Spirit takes on Perth Lynx in a battle of the bottom two teams. The pairing will first have the chance to overcome title contenders, University of Canberra (UC) Capitals and Melbourne Boomers respectively, before the Capitals and Boomers go head-to-head in the earlier game on Wednesday in what is a repeat of last year’s semi-final. The Boomers are one of only two unbeaten sides after Round 1, with a couple of wins giving them the chance to remain poised to overtake Southside Flyers in the next week. Meanwhile UC Capitals are 1-1 from their season thus far, whilst the Lynx and Spirit sit at two losses from as many games.

If we look at the two bottom teams, the key battles will be at both ends of the court. Carley Ernst has been a prolific scorer for the Spirit in her two games, averaging the 15 point, four rebounds and one block in her two games this season, and she will likely spend time going head-to-head with Darcee Garbin who is a little smaller, but just as potent, with 13.5 points, 5.0 rebounds, 2.5 assists, 2.0 blocks and 1.5 steals, showing she can do a little of everything.

Jessie Edwards has the extra height in the paint for the Lynx, averaging the six points and five rebounds, as Alicia Froling will aim to nullify some of that influence with a massive nine rebounds already in her two games to go with five points per game. In the backcourt, Tessa Lavey built up from game one to game two, averaging 11.5 points, 3.5 rebounds and an impressive 6.5 assists so far this season. With her team struggling to find a playmaker on offence, she is averaging almost half of her team’s 14 assists per game. Perth are in a similar boat with Garbin and Taylah Burrows (2.0 points, 3.5 rebounds and 2.5 assists) leading the way.

Katie-Rae Ebzery is the third highest scorer from the quartet of teams in the Mackay hub this week, with the Lynx Opal shooting 17 points per game, to go with her 2.5 rebounds and 2.0 blocks. For a sub-180cm player, Ebzery is able to deny the opposition really well and provide good defence on court, then get forward and apply scoreboard pressure.

The blockbuster match of the hub will be the rematch of last year’s semi-final between the Capitals and Boomers, though fresh off an upset win over title favourites Southside Flyers, the Boomers will this time be favoured. The big question mark for the Capitals will be whether or not co-captain Kelsey Griffin can return from injury, because being one of the biggest stars in the competition, she automatically adds and extra element of X-factor for the reigning back-to-back premiers.

In her absence, Keely Froling has made the starting position her own, putting up big numbers of 15.0 points, 6.5 rebounds and 1.5 assists, whilst Mikaela Ruef has seamlessly returned without an issue thanks to a massive 9.5 rebounds and 11.5 points per game. The fact that she often shares the five spot with Marianna Tolo, or has the flexibility to role into the four shows the amount of depth the Capitals have.

If there is one thing to take away from the Capitals thus far in season 2020, it is the development of the young talent. One only has to look at the likes of Maddison Rocci who has grabbed her starting spot with both hands, dominating on offence with 22.5 points per game, the third highest in the competition. Her head-to-head with the red-hot Tess Madgen (23.5 points, 6.5 rebounds and 5.0 assists) is one that everyone will be glued to their devices watching. Spectators cannot forget about Jade Melbourne who has been a special talent since arriving with the team this season, averaging the six points and three rebounds, but showing enough to suggest long-term she is a starting five player.

The Boomers have quickly established themselves as a team not willing to muck around, and whilst Opals, Cayla George and Ezi Magbegor were ultimately beaten by Liz Cambage in their win over the Flyers, the team had enough of a shared load to get over the line. George is putting up 16.0 points, 8.5 rebounds and 3.5 assists, whilst Magbegor is 11.0 points, 8.5 rebounds, 2.5 assists and 2.5 steals. The front court duo are well supported by  Ashleigh Karaitiana who has slotted into the three spot with a huge second game against the Flyers, deadly from range – 54.5 per cent – and averaging 11.5 points.

This group will answer plenty of questions this week, but the Boomers might be marginally favoured to win both, with the Capitals getting up in their clash against the Spirit. The Spirit also could get their act together in the bottom of the table match against the Lynx, though it is hard to split them, just like if Griffin returns for the Capitals.

Interestingly enough, the Townsville hub has arguably the bigger question marks around the results based on the first round of action. It looks early like both Adelaide Lightning and Sydney Uni Flames will not be easy beats, with the Lightning already toppling the UC Capitals and the Flames taking care of the Spirit. The big question will be how they fair against the biggest challenger in the league in Southside Flyers, as well as a team that is touted as the most improved in Townsville Fire.

The Fire and Flames clash tomorrow will be a hotly contested match, and not just because of their names, but because both are battling for what could be that fourth spot on the table. Similarly, the Lightning have the two crunch games against the Flyers and Flames to really see where they are at. If the Lightning or Flames come away with a win, or even two wins, then that will go a long way to seeing up their season in a condensed year.

Starting with the title favourites, the Flyers are 2-1 after a loss to rivals Melbourne Boomers either side of wins over the Flames and Spirit. They should be able to win against both the Lightning and Fire at their best, but both teams have enough talent to worry the Flyers if they have an off night. It is no surprise to see Cambage leading the way, but despite 24 points and 19 rebounds against the Boomers, it was not enough to drag her team over the line. Limited minutes – eight – in the win against the Flames brought her average down to 16.3 points, 8.7 rebounds and 1.7 blocks, but it’s well over a double-double when looking at the 40-minute average.

Cambage should have no shortage of support around her with Opals all across the court from Sara Blicavs helping her off the boards (14 points, nine rebounds as well as 2.3 steals), Jenna O’Hea (10.3 points, 4.3 rebounds and 4.0 assists) covering the court well, and Rebecca Cole being the prolific scorer (17.3 points, 3.3 assists) coming off a 27-point game last start. Leilani Mitchell is able to fly under the radar this season, but her tenacity and ability to scrap for every possession, as well as feed to those potent scorers has been noticed, as she put up 8.7 points and 6.3 assists to rank equal second in that area.

Lauren Mansfield has been one of the top transfers in the WNBL for the Flames, coming across from the Lynx and assimilating in without any issues. She is averaging 16.7 points, 6.3 assists and 3.3 rebounds in her time, whilst teammate Alison Schwagmeyer (10.0 points, 4.3 rebounds, 3.7 assists and 2.0 steals) has similar enjoyed the extra time on court. Turkish-Australian national Funda Nakkasoglu has come off the bench for 11.7 points per game in coming into the Australian league, while Anneli Maley, Lauren Scherf and Natalie Burton are all bigs who are averaging 7.0 points and 5.0 rebounds or more thus far in the season.

Townsville Fire might be the most interesting team to watch, with the the potent scoring back court duo of Lauren Nicholson and Shyla Heal. Coming from Adelaide Lightning and Bendigo Spirit respectively, the experienced Nicholson has averaged 17.5 points, 4.0 rebounds and 1.5 assists this season, whilst the young star Heal has put up 16.5 points, 4.0 rebounds and 3.0 assists. No doubt the Fire would love to get more points out of the rest of the team, but they have been quite prolific off the boards, as Nadeen Payne (5.0 points, 6.5 rebounds) has helped support the returning Zitina Aokuso (8.5 points, 4.5 rebounds and 2.0 steals) with minutes.

Adelaide Lightning have been an even team performance led by Steph Talbot who was simply unbelievable in her first two games. Clearly the player of the first round, Talbot dropped 27.5 points, 12.0 rebounds, 4.0 steals, 3.0 assists and 2.0 blocks across her matches in some sensational outings, including stepping up in overtime against the Capitals with eight points. The new recruits have also come in and done well as Abigail Wehrung (16.0 points, 9.0 rebounds and 3.0 assists) and Alex Wilson (13.5 points, 5.5 rebounds, 5.5 assists and 1.5 steals) have seamlessly slotted into the five. Wilson will have a chance to face her old team the Flames in a blockbuster showing.

The Townsville hub has plenty of potential to answer a lot of questions with two more teams having a crack at the Flyers. With the Fire back in front of home fans you can never discount them, whilst the Flames are much improved too. That Sydney Uni-Townsville clash is potentially an early head-to-head to determine a fourth from fifth position. Expect the Flyers to still win both, with the feeling that Adelaide and Townsville get up over Sydney Uni, though the Flames could easily win both as well showing just how tight the competition is.