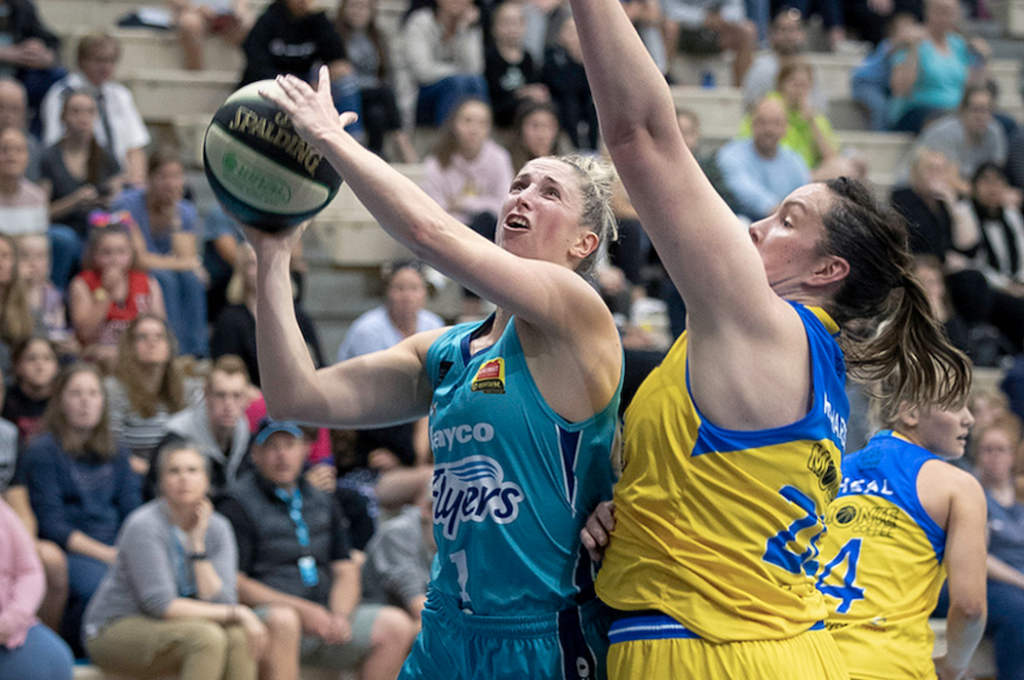 SOUTHSIDE Flyers and Sydney Uni Flames will become the first teams to face off in three games across four days when they double-up on today and tomorrow following their Thursday night clashes. There will be a blockbuster five games across today and tomorrow in order to conclude Round 1 of Women’s National Basketball League (WNBL) action, and then there is no rest for the wicked with Round 2 kicking off on Monday. We preview the two different hubs and their matches:

Up in Townsville, four teams will need to back-up off a two-day break to face off this afternoon, before the Flyers and Flames go at it again tomorrow. The much talked about Flyers and Melbourne Boomers clash is the pick of the round, with the title favourite Flyers likely to get a tougher resistance than against the Spirit on Thursday whom they smashed by 42 points. The experience gap in that game was clear, but the Boomers have more than enough stars in their own right to worry the Flyers and make them kick up into top gear to get the points.

In their first matches, Melbourne claimed a solid 15-point win over the Flames, before Southside went ham on the Spirit. It would be easy to expect the Flyers to win this game well, and while they should start favourites in every match they play, Melbourne will make life difficult. Both teams looked good in their respective matches, with Southside having more rebounds and assists, but were relatively even across the board. Both are more than capable of picking up second chance points too, which makes them a difficult proposition for any opposition.

The head-to-head of the match has to be Cayla George up against Liz Cambage with the Opal talents likely to have a huge say in the overall result. Cambage was the better performed player in Round 1, picking up 19 points in just 20 minutes, shooting at 63 per cent from the field, as well as five rebounds and two assists. Her free-throw shooting could improve at 50 per cent, but George’s accuracy was well down too with 40 per cent from the field and missing her three triple attempts. She racked up an impressive nine rebounds as well as two assists and two steals. George will also rotate with Ezi Magbegor with either able to play at the four or five, and Magbegor had 16 points and 11 rebounds in a double-double effort. No doubt Magbegor will also have Sara Blicavs for company who racked up 17 points and 12 rebounds in a big first-up effort.

Rotation off the bench will be crucial as the Flyers have to front up the next day with about a 20-hour turnaround from the final whistle on Saturday to the first tip-off on Sunday. With Sydney Uni Flames playing the earlier Saturday game, they will have an extra two hours to rest up for the huge encounter with the likely ladder-leading Flyers who will be hard to stop even if they are a little sore.

Coming away from the loss against Melbourne, the Flames should be relatively happy with their performance. It was not a win, but they pushed one of the top teams all the way. Their almost brand-new looking set-up seemed to go okay, though accuracy really hurt them, averaging just 32 per cent from the field. Lauren Mansfield was the standout with 17 points and seven assists, whilst Lauren Scherf was reliable as ever for 10 points, seven rebounds and three blocks. The one to watch was the returning Funda Nakkasoglu who helped herself to 12 points, half of which came from the free-throw line, and the other half from two triples. She only shot 2-10 from the field which showed with time she could be a more damaging shooter.

They will not be fancied to beat the Flyers, but should be favourites to take care of a young Bendigo Spirit outfit. Piper Dunlop is a star in the making, with the teenager coming off the bench and holding her own to showcase her accuracy from beyond the arc, nailing a three-pointer in her six minutes on court. Carley Ernst was the only player to really worry the Flyers on the scoreboard, knocking down 16 points and seven rebounds, as they too struggled with their field goal percentage. Alicia Froling was the only player to average more than 50 per cent from the field, and she only had the three attempts, but was crucial off the boards with 11 rebounds.

The Spirit lacked that cohesion and experience going forward, and only had the 12 assists, which they will need a lot more of if they are to upset the Flames. It was a baptism of fire for a new team coming up against a side that was not only so well drilled, but full of international experience. The Spirit managed to get minutes into every player, if Tessa Lavey (18 per cent field goal accuracy) can drop more shots in her next outing, then the Spirit will be a much more damaging outfit.

All four teams in the Mackay hub will be well rested after playing last on Wednesday night, as they go head-to-head on Sunday. While they will enjoy they break, they will not have it easy for long, with the four teams to then back-up and go on Monday in what will be a 24-hour turnaround. The one exception will be Adelaide Lightning, with the Lightning leaving the Mackay hub to play in Townsville on Tuesday, which the Fire will do once they have completed their home games here.

The Round 1 matches on opening night went different ways, with Adelaide Lightning holding off a fast-finishing University of Canberra (UC) Capitals outfit, while a new-look Townsville Fire made light work of Perth Lynx in a big victory. The Lightning looked in control after three quarters against the reigning back-to-back premiers, but then the Capitals stormed home with a Maddison Rocci layup levelling the scores and forcing the match into overtime. While they trailed by a point at one stage, the Capitals conceded the last 11 points of the game – eight to Steph Talbot – as the Lightning secured the win.

In the other game, Townsville Fire hardly looked like losing, running away with a comfortable 25-point win over Perth. The only question mark will come on the strength of the opposition, because like Bendigo, Perth’s youth and departures over the off-season mean they are likely to be in the bottom two teams in 2020. The Fire could only beat who they could beat, and despite fronting up with a new-look starting team, it seemed to work perfectly, and everyone played their role to suggest the Fire will be a big improver this season.

The Fire and Capitals match is set to be the one of the round, with Kelsey Griffin potentially returning for UC which will add that extra elite talent to the mix. In her absence, Keely Froling dropped 19 points and had four rebounds, whilst Mikayla Ruef racked up 13 points and had six rebounds in an impressive performance. The 40-minute outing for Rocci was telling however, with the young gun dropping 21 points, eight rebounds, seven assists and two steals on the opposition. She may well end up going head-to-head with equally exciting young gun Shyla Heal in what could be a matchup to watch.

Both teams have a mix of experience and youth, with Heal recording four rebounds and two assists to go with her 15 points, while Lauren Nicholson notched up 16 points, four rebounds and two assists. No doubt Fire fans would like to see returning young gun Zitina Aokuso used in even more minutes since coming back from a long-term injury, putting up eight points and seven rebounds in a promising return. Expect this game to go right down to the wire, and could come down to if Griffin plays or not, but do not be shocked if Townsville cause an upset, though the Capitals will be favoured.

Adelaide will be highly fancied to move to 2-0 to start their season when the Lightning takes on Perth which will be important ahead of their clash with the Flyers on Tuesday. To grind out an overtime win against such a quality opponent in the Capitals will be vital for the team’s confidence, and it was Talbot who was sensational with 31 points, 13 rebounds, three assists, seven steals and four blocks in the performance of Round 1. No doubt Perth will try and nullify her impact, whilst former Lynx player Marena Whittle will be hoping to put up a good effort after not scoring in her first outing. Abbey Wehrung, Alex Wilson, Chelsea Brook and Louella Tomlinson all hit double-figures though in a team effort.

For Perth, Darcee Garbin was a lone-hand on the scoring front, managing just the 12 points, six rebounds, two blocks and two assists. She will need a lot of help from her teammates in the second match if they are to cause an upset, with Katie Ebzery always tightly watched, whilst the season is more about getting experience into the young players coming through with a number of College returnees in 2020.

Prediction: UC Capitals to win in a thriller against Townsville Fire, and Adelaide Lightning to get the job done against Perth Lynx.