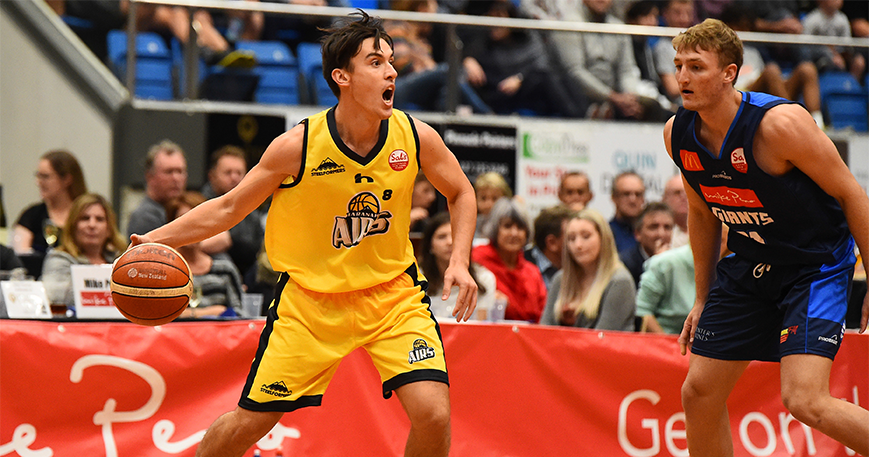 TARANAKI Mountainairs knew they would not have to wait long to enter last week’s 2020 Sal’s National Basketball League (NBL) Player Draft, holding the second overall pick ahead of the upcoming New Zealand NBL season. They used that pick on Derone Raukawa, a player Airs’ Chairman Laine Hopkinson described as “the best point guard in the draft”.

Hopkinson said the club believed they knew where they would stand entering the draft based on the intel they had heard, so were fairly confident in the availability of Raukawa at pick two.

“Yeah all indications were that Jordan Ngatai was going to go at one and maybe if he hadn’t of, we probably would have looked to have picked him,” he said. “But we wanted to start our team around who we consider the best point guard in the draft in Derone Raukawa so that’s why we chose him.

“But what we also knew was that other teams didn’t know who we’d pre-selected at our second round pick in Marcel Jones. “So we were sort of thinking about that combination. “They’d been at camp the weekend beforehand and worked really well together and we think that between the two of them that they were ideal for the way that this tournament will sort of go. “That’s the way we decided to go.”

Hopkinson said the change in the season to a modified version without imports placed a higher emphasis on a guard who could not only dish off the ball to teammates, but get it done himself. When asked if the big and small combination was something they had looked at prior to the draft, the Airs Chairman said it is always a consideration, but there were factors that swayed their decision making.

“Yes and no. Obviously if you can get your hands on any sort of good big guy then that’s helpful,” Hopkinson said. “But probably what we were more thinking about was what the format of the competition looked like and knowing that there’s no imports for point guards to throw the ball too this year. “A scoring point guard is probably more what you need in your squad for this type of competition. “We thought Derone was a sort of a no-brainer really, because he can put the ball in the hoop as well as run the show as well.”

Whilst every NZNBL fan knows what Raukawa and Jones are capable of on the court, Hopkinson said the club was able to use its knowledge to grab a diamond in the rough later in the draft.

“To be honest we probably got fairly close to what we thought or expected we would get (from the pre-draft planning),” he said. “We probably missed out on one player, which when you think about it, it’s not such a bad outcome. “We also were pretty happy to lock in Ken Tuffin as our seventh pick. “A guy who obviously not many other clubs knew much about and we think he’s a really good lock in for us. “I think overall things are pretty well balanced and I think it will come down to the injuries and a little bit of luck.”

Tuffin and one of his friends who have played overseas together were a couple of the names Hopkinson suggested could well be the surprise packets for the Airs this season.

“I think Ken Tuffin in there, but also his friend and someone that he’s played with overseas that we’ve got by the name of Francis Mulvihill,” he said. “It was interesting on draft night not many of the panellists knew much about him but we do and that’s why we picked him and we feel like he’s a really good defender, a really good back-up in that point guard position. “We’re really looking forward to seeing him how he goes.”

The club were really excited to land Raukawa, and it is easy to understand why, with the 25-year-old point guard – who can also play out of the shooting guard spot – a points-scoring machine. He was a star last year for the Airs as he put up numbers of 17.2 points, 2.9 assists, 2.4 rebounds and 1.5 steals in his time, something he will look to increase again this year. Previously a member of the successful Southland Sharks squad for a few seasons and Manawatu Jets before that, the 181cm talent has plenty of experience in the league.

CHAIRMAN LAINE HOPKINSON ON DERONE RAUKAWA’S ROLE IN 2020 COMPARED TO 2019:

“Yeah I think he’s got a bigger role. There will be more pressure on him to score and also leadership from a leadership perspective. We’re really going to need his experience because we do have a pretty young squad. While we have some journeymen in the team there, we still have young guys who are going to need someone to point them in the right direction, particularly with the recovery and things like that he’s really strong with and looking after himself and being prepared will be beneficial as well.”

A 203cm forward who could play out of the three or four spots, Jones has as much experience across his 12-year career since graduating Oregon State in 2008 as anyone else in the NZNBL. Playing for the Canterbury Rams in 2016-17, Jones won back-to-back NBL All-Star Five nominations. He has also previously played for Manawatu Jets, Wellington Saints, and last year, Southern Huskies. There he was the premier rebounder, picking up 11.2 rebounds – 8.1 off the defensive boards – to accompany 20.5 points, 2.1 assists, 1.9 steals and 0.9 blocks in the NZNBL.

The Taranaki Mountainairs are looking to work out the combinations that best suit the club early in the season, before trying to “build momentum” into the playoffs, something Hopkinson expects a lot of clubs to do when it came to rotating players.

“It’s a tricky one because the reality is that every club will be in the playoffs so it’s really just a ranking process, if you call it a regular season. “I think there’s a little bit of lee-way there to try a few things, particularly in the early rounds and then start building yourself some momentum and consistency in your line-ups as the tournament goes on so you hit the ground running in the playoff position.

“I suppose some teams will be jockeying to make sure that they come up against a team they are fairly confident they can beat in a playoff game so there will be a little bit of that as well. “Bit of a chess process I guess you could call it.”

Taranaki Mountainairs play in the first game of the season up against the Nelson Giants next Tuesday at 5.30pm, with just over a 24-hour turnaround to face the Franklin Bulls on Wednesday, before a third game against Auckland Rams on Saturday night.