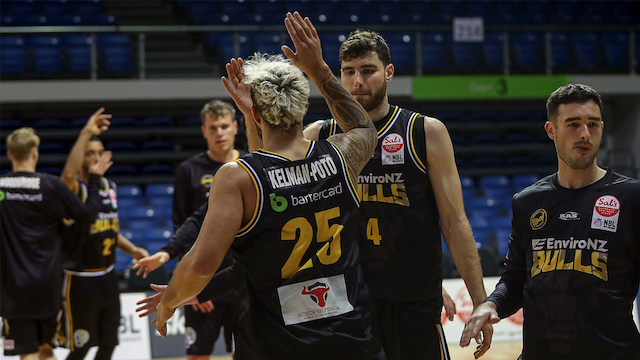 FRANKLIN BULLS are next up in our team-by-team review series of the 2020 Sal’s National Basketball League (NBL) Showdown. The Bulls finished a healthy fifth on the ladder at the end of the regular season, then suffered a narrow loss to Taranaki Mountainairs in the elimination final. We take a look at their season.

Having lost to them twice earlier in the season, the Bulls sought revenge perfectly with a big 92-65 victory over the Airs on July 23. Bursting out of the blocks in the opening half, the Bulls piled on 49 points to 27 to effectively end Taranaki’s hopes of finishing in the top two. Joe Reddish had a day out with 18 points, five rebounds and four steals, while Isaac Davidson (17 points, four rebounds), Everard Bartlett (16 points, six rebounds, five assists and three steals) and Sam Timmins (seven points, 12 rebounds, three assists and five steals) all had big days.

It was hardly a disgrace as they matched them toe-for-toe throughout an epic four quarter elimination final, but it was shattering in the fact that it occurred just six days after they had toppled the Airs. It was compounded by the fact it would knocked them out of the title race despite the best efforts of Dom Kelman-Poto (31 points, 10 rebounds, four assists and three steals) and Davidson (24 points, three rebounds and two assists). Marcel Jones (31 points, 10 rebounds, seven assists and two blocks) and Derone Raukawa (28 points, seven rebounds, seven assists and three steals) dominated the play and got the Airs over the line.

The Franklin Bulls went on an early run, winning five of six games early in the season to announce themselves as genuine contenders. Davidson was in Most Valuable Player (MVP) territory with his long-range shooting and accuracy hurting opposition teams. With Kelman-Poto and Timmins working the boards, they were a dominant unit and realistically, far better than their eventual sixth placed finish. In an even competition, they showed that right place, right time can open doors, and sometimes you just fall short.

Ultimately the Bulls were just beaten by a better team in the finals. They showed they could beat anyone on their day – they did so with five wins in six games and then collecting the last scalp of the Airs later in the season. Whilst they might have finished sixth by the end of the finals series, they can be proud of what they achieved in season 2020.

Franklin Bulls were a genuine contender, and as a side that entered the league for the first time, it was great to see. They had some electric players who really excited, as well as some bigs who dominated off the boards. Hopefully the Bulls are able to keep their list together for 2021, as they have some good young talent from which they can build upon and really go places.