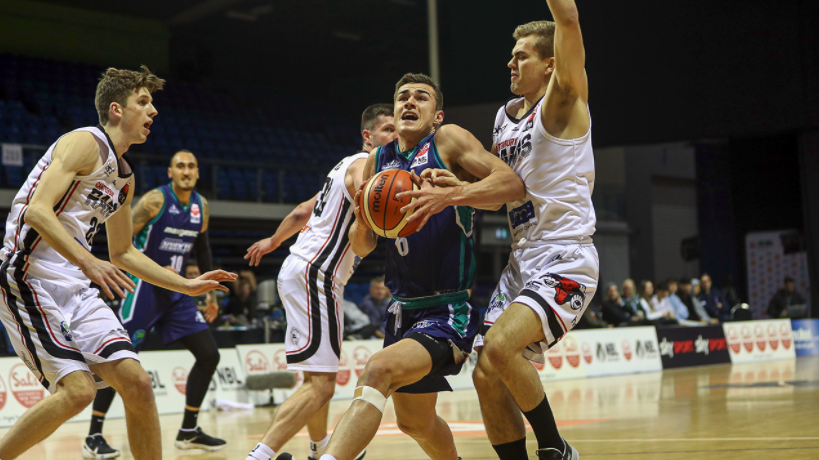 EACH 2020 Sal’s National Basketball League (NBL) Showdown side only has two games left in the regular season as the finals seres has already taken shape. With the top two teams winning overnight, it all but locks up the qualifying final unless one massively stumbles, while the bottom two are also secured with Nelson Giants and Canterbury Rams set to play off in the first elimination final. Both play tonight against a couple of top four sides hoping to have a strong run in the last couple of games. The remaining matches in the competition are the third encounters between the teams.

Taranaki Mountainairs are the only side that can upset the current order of play with the top two sides in the Otago Nuggets and Manawatu Jets. Whilst the league’s most high-powered offence can level the top two sides on eight wins after this game, the Airs have to hope they win their last game while both teams lose their final two encounters. For the Giants, they sit in the bottom two and are preparing to play the Rams in the first elimination final next Tuesday in which there will be no turning back. In saying that, claiming a huge scalp or two in the final week could do wonders for the confidence.

While the Airs dominate across the board in most statistical areas such as points (plus 19.8), rebounds (plus 9.1) and assists (plus 4.5), the biggest differential might be in the shooting efficiency from the charity stripe. The Airs are the top side at capitalising from the line, making 79.3 per cent of their free throws, while the Giants are last with just two thirds on their free throws going in. The Airs are the most efficient side in the competition which sets them up for finals, shooting at an average of 47.5, while the Giants are 43.3 per cent, ranked sixth of the seven sides.

In the first encounter between the sides back on opening night, the Airs got up 112-96 over an understrength Giants side missing Mika Vukona, Mike Karena and Dane Brooks. Derone Raukawa (28 points, six rebounds and 10 assists) had a night out, teaming up with Marcel Jones (13 points, 12 rebounds and seven assists) who both were not too far off triple-doubles. Five Airs reached double-figure points in the opening game of the season, while it was Nic Trathen (25 points, four rebounds), Tom Ingham (23 points, four rebounds and three assists) and Tysxun Aiolupotea (20 points, five rebounds) who picked up 68 of the Giants’ 96 points on the night.

The Airs doubled down on their hold over the Giants in their second match on July 9, albeit needing overtime to finish them off. Leading by a whopping 21 points at half-time, Taranaki watched its lead dissolve as the Giants stormed home. Lucky for the Airs, they won overtime 20-13 to claim a 95-88 victory. Raukawa (24 points, three rebounds and seven assists), Jones (21 points, 16 rebounds, four assists and two blocks) and Ken Tuffin (10 points, 13 rebounds and three steals) all went to work in the win. For the Giants, Brooks topscored with 23 points and eight rebounds, while Zeb Lovell picked up a double-double courtesy of 10 points and 12 rebounds.

Auckland Huskies’ top two dreams might have been dashed with the loss to the top of the table Otago Nuggets last night, but third spot is still within reach if the Huskies can string together a couple of wins. They sit in fourth currently, but could still slide to fifth if they go down here and the Franklin Bulls get up. The Rams are locked into the bottom two, but have the chance to overtake the Giants with a couple of wins in the last two games and get off the bottom. In saying that, Canterbury is on a nine-game losing streak after winning its first three matches, so will need to lift in order to break that run.

Both these sides are evenly matched when it comes to the stats, with the Rams marginally ahead in points per game (86 to 85.3), while the Huskies shade them in rebounds (44.6 to 43.9). Auckland is one of the stronger assist sides, averaging 17 per game compared to the Rams’ 14.9, though Canterbury is far more accurate from the field, with a 45.5 per cent efficiency rate compared to the Huskies’ 40.3 per cent. Thought a lot of that damage was done early in the season, with the Huskies boosting their field goal numbers on the weekend having sunk the first 17 baskets against Nelson Giants. Not much separates them from a three-point shooting perspective, but the Rams are ranked second in free-throw shooting percentage.

The other game on opening night was a throwback to sweeter times for the Rams as they produced what would be their best performance of the season with a 102-70 triumph over the Huskies. The Rams dominated from the first tip-off and won three of the four quarters on their way to a 32-point victory. Taylor Britt lit up the court with 22 points and eight rebounds, well aided by Toby Gillooly (25 points, six rebounds and two blocks), as the side looked to have compensated for the loss of Jack Salt and Joe Cook-Green on the eve of the season. The Huskies had a dirty shooting night, sinking just 33.8 per cent of their field goals compared to the Rams’ 52.1 per cent, with Tohi Smith-Milner‘s 15 points at 62.5 per cent, and Nate Wilson‘s 10 points at the same efficiency the only proficient and efficient scorers.

The second encounter on July 9 resulted in a Huskies victory, but not without a sluggish start. Auckland trailed by six points at quarter time, then poured on 58 points to 30 in the middle two terms to race off to a 22-point final break lead. The Rams tried to storm back with a dominant 27-12 final term, but fell short going down 88-81. Izayah Mauriohooho Le’Afa played in this one after missing their early encounter and had a whopping eight steals to accompany 19 points. Inaccurate on opening night, Leon Henry (17 points, 14 rebounds and four steals) and Taine Murray (19 points, five rebounds) both contributed at a higher rate. Britt had another impressive night with 21 points, six rebounds and four assists, while it was Thomas Webley (15 points, six rebounds) and Sam Smith (12 points, two rebounds) who stepped up in the absence of Gillooly who had joined the injured group.