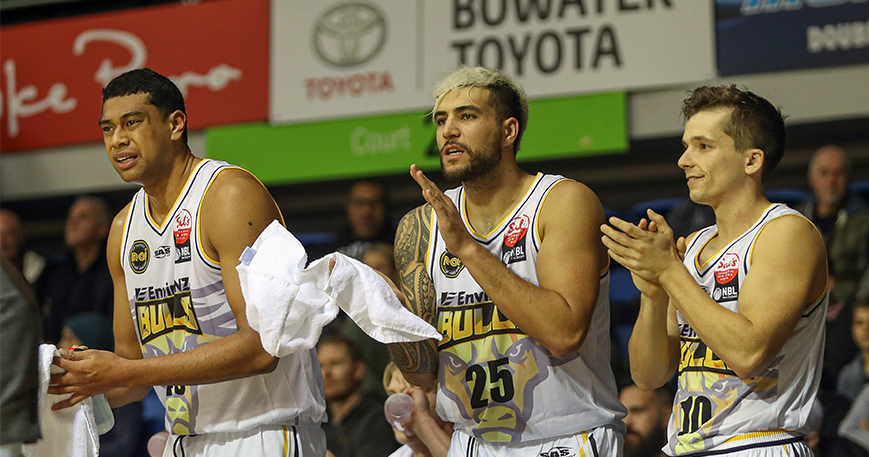 THE final frontier is here and there is no turning back after the next five days of action with matches galore from Tuesday through until Saturday in the 2020 Sal’s National Basketball League (NBL) Showdown. The first night of week five sees genuine title contenders going at it as they attempt to jostle for a top two spot.

Manwatu Jets can go a long way to securing a top two spot and a qualifying final if they can get up over Franklin Bulls in what is anticipated to be a thrilling contest. In a battle between the second best offensive side and the best defensive one, it is sure to be a thrilling battle. While the Jets are in pole position to maintain a spot inside the top two, the Bulls can snatch it with a win in the game and put pressure on the top sides in the final round. With the second match of the night also paramount in determining the make up of the finals series, every win counts starting with this game.

The Jets average 98.2 points per game compared to the Bulls’ 82.6 which ranks the latter sixth overall in the competition for offensive scoring. The Bulls are by far the top defensive side, conceding just 80.5 points per game to the Jets’ 93.7. In other words, the Bulls like a low-scoring encounter, whilst the Jets back themselves to win in a high-octane shooting frenzy. The Jets are fresh off just that, outscoring the previous top of the table Taranaki Mountainairs 118-103 in a big win, after just escaping with a three-point triumph over Canterbury Rams. The Bulls notched up an 82-70 victory over the Nelson Giants, before falling to the Nuggets, 89-83. If the Jets can score more than 90 points, it is likely they will win, while if Franklin can keep their usually high-scoring opponents to sub-80 then the Bulls will go a long way to victory.

The last time these sides met, Franklin Bulls got up by 11 points courtesy of a strong start and equally impressive third term. In what was a seesawing contest, the Bulls won 83-72 keeping the Jets big scorers to 20 points or less, with Hyrum Harris still out of the Jets’ side. Tom Vodanovich managed just seven points in an off night for the power forward, but he still racked up 12 rebounds to have an impact off the boards. Jayden Bezzant was the top scorer for the Jets with 20, while also having three rebounds, two assists and two steals. Taane Samuel (17 points, eight rebounds and two assists) was busy, while Ashton McQueen stepped up to contribute 13 points, three rebounds and two assists.

For the Bulls, Sam Timmins top scored with 17 points and eight rebounds, while Dom Kelman-Poto was also solid with 15 points and seven rebounds. Everard Bartlett showed his experience and accuracy to shoot 57.1 per cent from the field, the highest on his side to collect 13 points – including 3/4 from long range – as well as six rebounds. Isaac Davidson (10 points, five rebounds and two steals) was not quite as accurate from the field, though Nikau McCullough (11 points, six rebounds and three assists) was strong off the bench in the win. If the Bulls can repeat the dose in this match, then they should go well, but the Jets are in ripping form of late.

The second match is just as crucial as the first with the hunted in Otago Nuggets – sitting top of the table where everyone wants to be – going up against the most improved team in the competition in recent weeks in Auckland Huskies. While the Nuggets control the top spot, they are still only a win ahead of the Huskies and Bulls in fourth and fifth respectively, so the top five can change drastically in the lead up to the finals. If the Nuggets win, they realistically need one win in their final two games to secure a qualifying final spot, whilst if the Huskies win, they will likely still need to win both, though depending on results.

The Huskies are coming off a huge win over Nelson Giants, 96-67 which saw the Huskies sink the first 17 baskets without a miss on their way to a 45-point opening term. If they have a hot start like that they will be hard to beat, though their opponents Otago Nuggets are coming off a couple of hard-fought wins over Franklin Bulls (six points) and Canterbury Rams (one point). Prior to that the Nuggets lost to Taranaki Mountainairs by a point, so no doubt the fingernails of Nuggets fans are wearing thin. Prior to the win against the Giants, the Huskies upset the Airs by three points in a thrilling 102-99 victory, whilst overcoming Franklin Bulls a couple of days earlier by four points.

It was not that long ago that the Huskies and Nuggets faced off, with Auckland topping the favourites in a memorable 81-69 triumph. The Huskies had a strong start to lead by five points at the first break, and then had one of those rare games to win all four quarters and emerge victorious by 12 points. Young gun, Taine Murray had a day out with 19 points, five rebounds and three assists, sinking three of six from long-range. He was well aided by Tohi Smith-Milner and Leon Henry who both recorded double doubles in huge performances. They combined for 28 points and 24 rebounds, shooting 5/12 from three-point range, whilst dishing off six assists. The other player to reach double figures was Izayah Mauriohooho Le’Afa who pick-pocketed his opponent a remarkable six times and added to his all-round game of 12 points, six rebounds and three assists.

Jordan Ngatai unsurprisingly led the way for the Nuggets in defeat, picking up 19 points, eight rebounds, three assists and three steals, but shot at only 22.7 per cent from the field. Josh Aitcheson played a memorable game with a double-double of 10 points, 10 rebounds and five steals to be his side’s best overall, while Jordan Hunt was busy with 12 points and seven rebounds. It was a disappointing night from the Nuggets who shot at just 32.4 per cent from the field as the Huskies defence forced them into errors with Ngatai and Jarrod Kenny having an uncharacteristic 13 combined turnovers for the match. Auckland will want to do much of the same in this encounter tonight, though the Nuggets will no doubt put up a better show than their previous game, and it shapes as a blockbuster.