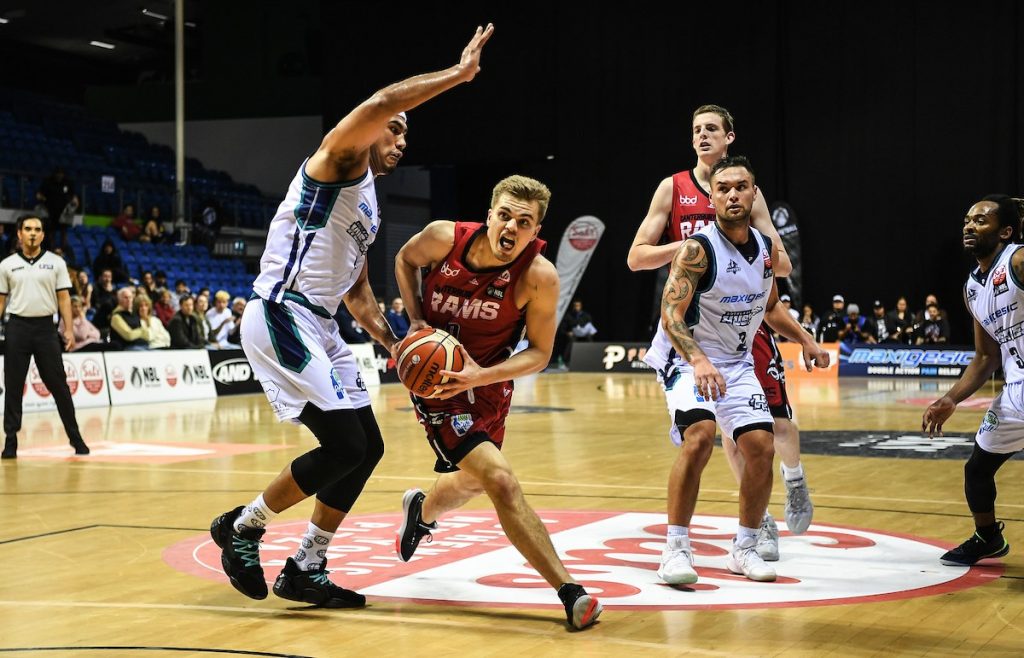 EVERY side in the 2020 Sal’s National Basketball League (NBL) Showdown has played now with some form behind them. For the Otago Nuggets, tonight marks their final game of the week as the only side with the two matches, whilst the three other teams – Nelson Giants, Franklin Bulls and Canterbury Rams – arrive for the second of three matches, and the last games before a day off.

The first game of the night pits a game one winner against a game one loser to see if one side can continue its fortunes or if the other side can reverse its opening day result. The Otago Nuggets come into the match fresh off a tight win 24 hours earlier against the Manawatu Jets, whilst the Nelson Giants went down to Taranaki Mountainairs on night one.

The Nuggets put up the third highest score of any team – Taranaki Airs had the two higher ones – with 104 points, but also conceded 100 points in a high-scoring contest. They were strong off the defensive boards, ranking second overall thus far, but are ranked sixth of the seven teams off the offensive boards. It was a shock to no one that Jarrod Kenny and Jordan Ngatai had sensational games leading Otago’s offence.

Kenny racked up 28 points and six assists, dishing off dimes with ease, whilst Ngatai had a field day across the board, recording 19 points, 10 rebounds and five assists in a huge performance himself. Kenny’s accuracy of 61.5 per cent from the field, including five of nine from outside the arc was particularly impressive. That is before you take into account the roles of Jordan Hunt (14 points, seven rebounds) and Josh Aitcheson (12 points, seven rebounds) who showed they can step up alongside that damaging duo.

The Giants still managed to score 96 points in the 16-point loss to the Airs, and considering the names out of the side – Mika Vukona, Mike Karena and Dane Brooks – most teams would struggle to get that close. With Vukona falling 90 minutes short of being available to join the group post-isolation, the veteran power forward will be a huge inclusion to the side, which struggled off the boards at both ends without their big men.

Without their top three draft picks, it was Nic Trathen (25 points, four rebounds), Tom Ingham (23 points, four rebounds and three assists) and Tysxun Aiolupotea (20 points, five rebounds and two assists) who did the bulk of the damage in a losing side. If the big three can return for the Giants, then watch out because their depth was seriously impressive in the opening game of the season despite the loss. But the big question mark will be getting the rustiness out after an extended break without a game behind them like their opponents.

This game has the potential to be huge, with the Nuggets showing their abilities off the defensive boards, whilst the Giants have the potential to do the same when at full strength. It will come down to accuracy when taking shots that could decide this game.

The second match of the night sees the league’s most cohesive club up against a side that is still learning how to gel over four quarters. Watching the Bulls last night, their best is capable of matching it with the best in the competition, they just were not able to do it for long enough to get the win. The Rams had everything thrown at them leading into the season with the losses of Jack Salt and Joe Cook-Green, but found a way to win against Auckland Huskies on night one.

In the 12-point loss to the Airs, the Bulls had some huge moments, both in the first term and charging home in the fourth to draw within five points at one stage early. But the middle two terms – where they conceded an extra 18 points – is what cost them against the Airs in Taranaki’s second clash of the week. The Bulls recorded the lowest rebound average of any side, an area that Liam Simmons will no doubt look to improve on in game two. They still managed to score 95 points despite the loss, which is a positive to take out of the club’s inaugural game.

Isaac Davidson led the way with 27 points, eight rebounds, three assists and two steals in a memorable match. Dom Kelman-Poto was strong off the boards with 10 points and four rebounds, sharing the load with Nick Barrow who finished with 11 points and five rebounds off the bench. Also coming off the pine to cause headaches on the scoring front was Nikau McCulloch (17 points, two rebounds), whilst Everard Bartlett was the key distributor with five assists to accompany 13 points.

The Rams could not have been much more impressive in their huge win over Auckland Huskies, dominating most of the key areas during the 102-70 victory. The Rams had 12 more defensive rebounds and seven more blocks, being incredibly in sync with each other throughout the match. They looked like a team that has played together for some time, and that is how they performed. If they bring that sam level of intensity on the defensive end into this match, they deserve to start favourites.

In game one, it was Toby Gillooly (25 points, six rebounds and two blocks) and Taylor Britt (22 points, eight rebounds) who led the way for the Rams, whilst Jack Exeter came off the bench for 13 points. What made Canterbury’s win so impressive was the shared load, with 10 players making their way on court, and nine of them scoring at least six points. With that kind of balance, it is hard to restrict the scoring and makes them a very damaging side.

Canterbury Rams head in favourites and deservingly so. The Bulls will look to make a few changes in this match to counter some of the impressive defensive efforts of the Rams, but Franklin will need to be at their best for longer in order for the Bulls to bounce back.