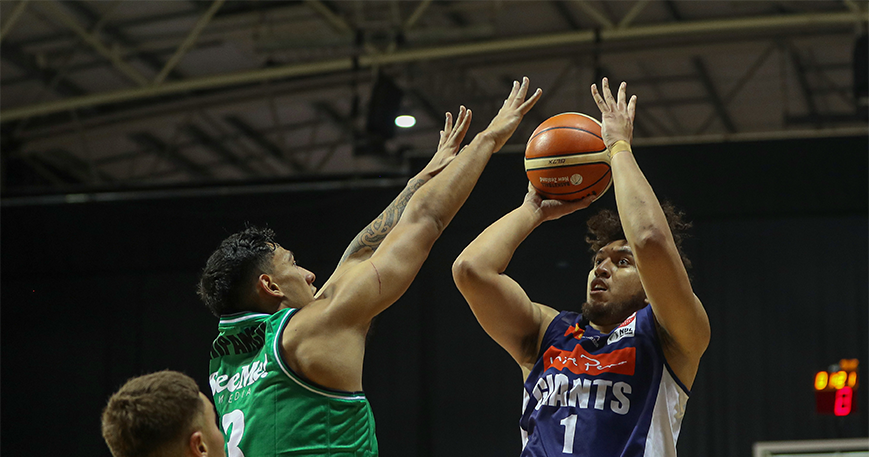 TONIGHT’S 2020 Sal’s National Basketball League (NBL) action is sure to help break up the mid-table logjam of teams in some form at the midpoint of the season as sides hope to either continue or turnaround their form. The two matches see Manawatu Jets up against Nelson Giants, and Franklin Bulls going head-to-head with Canterbury Rams.

The opening game of the night sees two teams who could be regarded as danger sides still looking to regain top stars. The Jets are missing Hyrum Harris, whilst the Giants remain without Mika Vukona, but both sides have been able to remain just one win off the pace in an even competition. The Jets have a higher percentage in terms of both for and against points, but dropping games to the Giants and Otago Nuggets earlier in the season sees them sit fifth on a head-to-head basis.

In the Jets and Giants’ earlier clash back on June 28, the Jets flew out of the blocks to lead by eight at half-time but were begged back by the Giants. Nelson only trailed by a point at the final break before scoring 26-20 in the last term to run over the top of Manawatu and win by five points, 88-83. In what was Mike Karena‘s first game of the season, he broke the Giants’ two-game losing streak to start the 2020 Sal’s NBL season, putting up 17 points, six rebounds, two assists and one block.

In that game, the Jets dominated the boards with six more in total, as well as three more steals and a higher shooting percentage. However Manawatu also had six more turnovers which is something they would want to change in this encounter with the Giants. Nelson comes in as the more in-form team, winning three of the past four and narrowly dropping the other game to Franklin Bulls by four points in between. It was the victory against the Jets that started the roll on for Giants’ success, with Karena a huge part of that. All season the Jets have maintained a yo-yo win-loss record and have a chance to go back-to-back wins for the first time in 2020 if they can get up here.

In terms of seasons, these two sides could not have had more opposite entries in the first six games facing each of the other teams in the competition. Canterbury Rams, missing two of their stars for the season on the edge of the first tip-off in Jack Salt and Joe Cook-Green, stunned the competition to win the first three games. They then slumped to three consecutive losses and have fallen to sixth on the table, only a win ahead of Auckland. Franklin Bulls on the other hand, dropped their first two games, then strung four consecutive wins together prior to last night’s loss to Taranaki Mountainairs.

The defeat to the Airs meant the Bulls surrendered top spot, but still sit second a win ahead of the logjam of four teams. The only problem if they lose this game is that the Rams will overtake them on the table having also beaten them in their earlier encounter. In what was effectively the Bulls prior defeat to last night, the Rams took control from the onset to score 40 points to 30 in the opening half. Franklin hit back with 42 to 35 in the second half, but fell three points short despite the best efforts of a number of players.

Taylor Britt was unbelievable in the win for Canterbury, recording a double-double of 19 points, 10 rebounds, two assists and a block, while Toby Gillooly acted as a strong supporting act thanks to 16 points, five rebounds and a steal. Alex Talma was strong off the boards with nine rebounds to accompany his seven points, while Sam Smith had nine points, four rebounds, three assists and one steal. The Bulls had their own stars on the night, with Dom Kelman-Poto also notching up a double-double with 20 points, 10 rebounds, three steals, one assist and one block, while Isaac Davidson dropped 21 points, three rebounds and a steal. Sam Timmins was productive in center with 13 points, six rebounds and two blocks.

Coming into this this match the Bulls are in the much better form and will be keen to bounce back from the disappointing 14-point loss to the Airs last night. Taranaki flew out of the blocks in the first half to pile on 56 points to 29 to all but end the contest. Franklin was strong in the second half, but it was too little, too late by that stage, and they will be keen to make a statement early in the match tonight. Similarly, the Rams will be desperate to turn their form around and break a three-game losing streak.