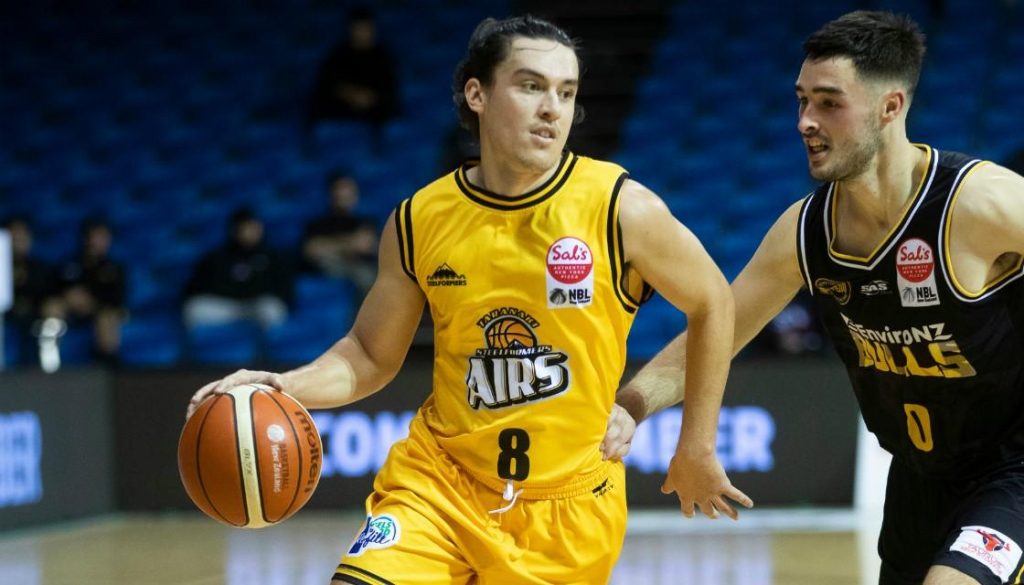 WITH the NZNBL season done and dusted Draft Central takes a look at some of the top performers throughout the season. Taranaki Mountainairs, Manawatu Jets and Otago Nuggets have quite a few players that feature within the top five areas in focus given their impressive 2020 campaign.

AVERAGE POINTS:
Taranaki Mountainairs star, Derone Raukawa leads all comers when it comes to points with an average of 23.7 a game. Raukawa was a commanding presence for the Airs and was a key reason his side got as far as they did with his ability to find the basket and score. Hot on his heels was teammate Marcel Jones who also impressed throughout the season averaging an impressive 22.8 points thanks to his tenacity and drive to the rim. MVP winner Thomas Vodanovich also had a commanding influence on the scoreboard with the Manawatu Jets bigman leading the way for his side and hitting the scoreboard regularly to register an average 22.4 points. Although the Auckland Huskies had a challenging year it did not seem to faze Izayah Mauriohooho Le’Afa who proved to be the go to when it came to posting a decent tally single handedly influencing the outcome of games with his average of 20.7 points a game. Rounding out the top five is Jordan Hunt who managed 19.6 points a game for premiers Otago Nuggets.

AVERAGE ASSISTS:
Topping the table for points, Raukawa also took out top spot for assists with the Airs playmaker amassing an average of 7.4. Classy with ball in hand, Raukawa was both a threat on the scoreboard and in transition constantly dishing off dimes to his teammates to create attacking forays. Jets player Hyrum Harris also impressed throughout the season racking up 6.4 assists a game thanks to his vision and execution while Mauriohooho Le’Afa showcased his strength with ball in hand to record 5.4 a game. There is no denying that premiership player Jarrod Kenny was electric with ball in hand, able to slice through the full court press and release the rock with confidence racking up 5.2 assists a game as Taylor Britt closed out the top five with 4.6 assists for the Canterbury Rams.

AVERAGE REBOUNDS:
Frequently hitting the scoreboard, Jones also showcased his firepower and strength off the backboard with a whopping 13.1 rebounds a game. Jones was an integral member for the Airs with his ability to gobble up anything that came his way. Not far behind him was Harris with the Manawatu Jets representative proving to be a menace for opposition teams with his rebounding position to pick up an average of 11.6. Coming in at third on the leaderboard, Leon Henry had a solid season for the Huskies dragging down 10.9 rebounds while Vodanovich showcased why he was MVP featuring in the top five for rebounds with an average of 10.2 thanks to his commanding frame and read of the play. Although he did not get as much court time as his counterparts Alexander Talma secured fifth spot on the tally with a season average of eight rebounds.

AVERAGE BLOCKS:
When it came to defensive pressure and blocks Samuel Timmins led the way not only for his side but for the competition with the Franklin Bulls player notching up 1.7 a game testament to his impeccable foresight and elevation to get hands to ball. Shane Temara was not far off the pace with 1.1 blocks a game while Joshua Leger recorded an average of a block a game. Both Dane Brooks and Henry managed just under a block a game sitting at 0.9 blocks a game highlighting their defensive pressure for their respective teams.

AVERAGE STEALS:
Harris had a hand in just about every facet of the game with the Jets star taking out top spot for steals with a competition high 2.7 highlighting his ability to cleanly attack the ball and most importantly succeed. Similar to Harris, Mauriohooho Le’Afa had an impressive season featuring highly in most areas with an average of 2.5 steals while Jayden Bezzant also starred for the Jets with his speed to dart around the court and get a hand in at every opportunity that came his way with 1.9 steals a game. Henry amassed 1.6 steals a game as Josh Bloxam completed the top five with 1.5 steals.