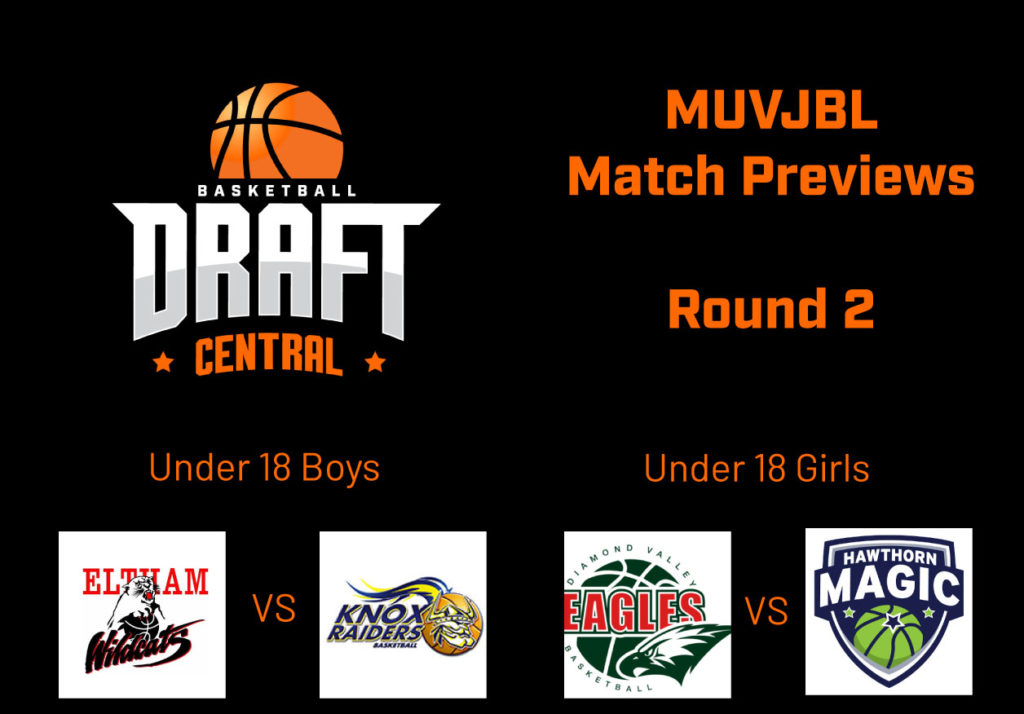 ROUND 2 of the Melbourne United Victorian Junior Basketball League (MUVJBL) Under-18 Boys Championship Division is set to be a big one with Eltham, Coburg, Bulleen, Diamond Valley and Knox all looking to win their second consecutive games.

In the final game of the Ashe Pool on Friday night, Eltham and Knox are set to do battle with both sides sitting at a win apiece and looking to keep their undefeated record intact. Although it is only Round 2 a hot start can all but set up a successful campaign for the year something both sides will be keen to grasp. Eltham currently sits in second place thanks to a percentage boosting performance last round while Knox have fifth spot sewn up and will be hoping to improve their positioning with a win. Eltham’s ability to score beyond the arc is a key component of their game sinking seven three-pointers last week a feat they will be hoping to replicate once again to get the win over Knox. But the Raiders are pretty handy in the same department making 10 three-pointers last week meaning this game could quite easily turn into a shoot off given Knox have shown just how easily they can apply scoreboard pressure.

In what could arguably be the game of the round, expect Thomas Stockwell and Fletcher Parkinson to come up big in front of a home crowd. The Eltham duo brought out the party tricks last round with 16 and 14 points respectively showcasing just how damaging they can be when on song. Stockwell starred from the three-point range with three maximums while Harrison Stones was the next closest with two three-pointers. Throw in contributions from the likes of Patrick Dozzi and the Wildcats have plenty of potential and could down Knox if they get their game plan flowing early.

For the Raiders, they had four players reach double digits last round, and if they bring that same scoreboard intensity could rattle Eltham and notch up their second win of the year. Jordan Anderson led from the front in Round 1 finishing with 16 points, he did get himself into some personal foul trouble however, racking up four fouls and will have to address that this round to ensure he can have a full quarter impact. Jyelin Moli was close behind in the scoring department with 15 points for his efforts. But the scoring options do not stop there with Ethan Taylor and Harry Johnson knocking back 11 points apiece displaying just how much depth Knox have when it comes to scoring prowess.

In other matches, Bulleen will be hoping to make it two on the trot with a win against Camberwell to kick start the season while Diamond Valley are in the same boat up against Coburg. Early wins on the board for both sides will give them early ascendancy while the battle between Geelong United and Ringwood will result in one side getting their first win on the board. In the only other game in the Ashe Pool, Dandenong will take on Eltham 2. Switching conferences and the first-place Nunawading are set to lock horns with Hawthorn while Bendigo and Pakenham are looking for their first win. Keilor and Ballarat face off with Melbourne and McKinnon also vying off for the win. The last game of the round is between Waverley and Kilsyth.

IN a battle of third versus fourth the clash between Diamond Valley and Hawthorn will help to give one side the upper hand early with two wins on the trot. The Eagles put on a clinic last round with a 35-point drubbing of McKinnon sending an early warning shot to the rest of the competition while Hawthorn also plied their trade with a solid 18-point victory. Despite going quiet in the second and third terms Hawthorn managed to string together a dominant win and will know that they have the firepower to wreak havoc once again however, Diamond Valley got better as the game went on scoring a whopping 42 points in the second half making for a tantalising match-up. The home sides three-point shooting is one to be impressed with while Hawthorn is just as effective.

Three players reached double digits for the Eagles with Sophie Burrows proving to be the most dominant of the lot with 17 points. If Burrows can duplicate that form in Round 2 given her ability to back herself from beyond the arc and skill to do damage in the paint she could put her side in good stead. Along with Burrows both Jade Dunne and Imogen Rock are viable options to the basket coming off a 14-point showing last round an effort they will be hoping to repeat. Georgia Kitchell should not be underestimated able to chime in on the scoreboard and will be looking to have more of an impact this match.

On the other hand, Hawthorn haS a couple of key cogs when it comes to scoring with the load shared between Nikki Stanic, Emma Gebert and Amy O’Hara. The trio did the bulk of the shooting and if are kept under control in their Round 2 clash the Magic could struggle to get the win. Stanic managed a team-high 14 points last round while Gebert 11 and O’Hara 10 also played their part but will have to up the ante against a high scoring opposition. Solid performances from the likes of Ally Marshall and Sophie Palmer will also assist in notching up their second win.

In other games, Ballarat play host to the bottom placed Geelong United, while the first versus second in the Kilsyth and Nunawading clash will draw plenty of attention. Bulleen and McKinnon face off with Waverley and Keilor set to cap off the round for the Watson Pool. On the other hand, Dandenong and Melbourne kick things off for the Ashe Pool with Ringwood welcoming Nunawading 2. Expect the clash between Broadmeadows and Altona to be interesting with Frankston up against it in their Round 2 draw against Sandringham. Knox play the bottom placed Eltham in hope to secure their first win of the season.