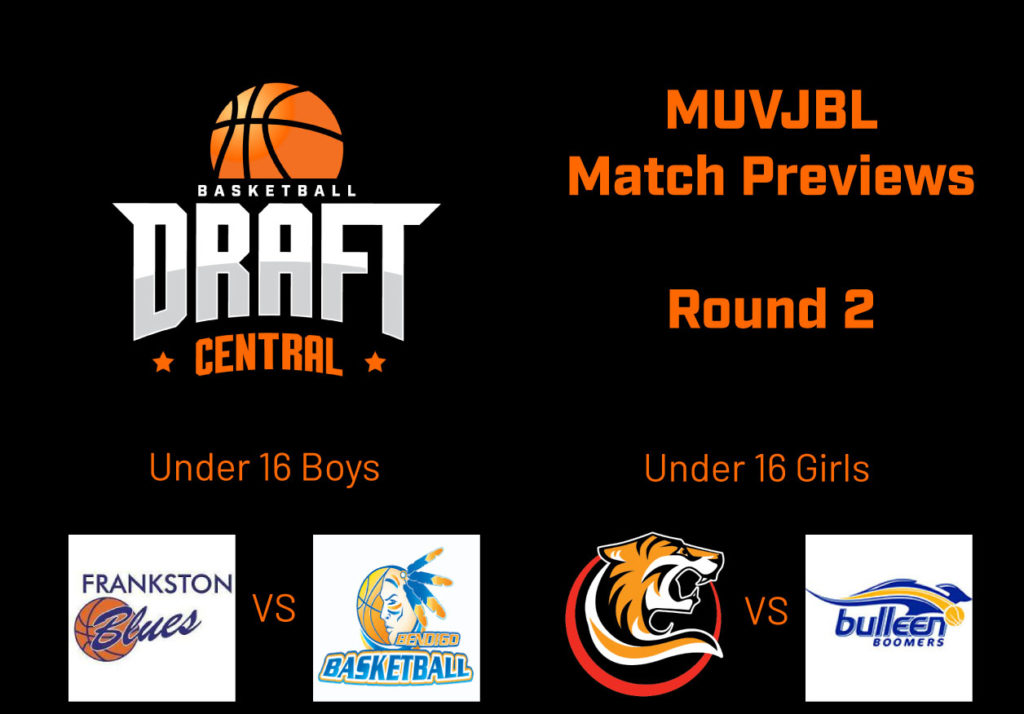 ROUND 2 of the Melbourne United Victorian Junior Basketball League (MUVJBL) Under-16 Boys and Girls Championship Division is set to tip-off tonight with each team looking to claim the early upper hand on the competition and really prove their case as top dog.

The game of the round could quite possibly be the clash between the first placed Bendigo and second placed Frankston. Both sides flexed their muscles in the opening round of the MUVJBL with convincing wins over their opponents and putting an early target on their backs as the ones to beat. Frankston raced out of the blocks in their 18-point win while Bendigo proved that scoring was no issue racking up a 35-point victory.

Frankston were led by damaging duo Kynan Philippe and Sam Shinsky who highlighted their scoring prowess with 20 and 18 points respectively. Philippe ran into a bit of foul trouble with four, for the game an area he will be hoping to tidy up. They were not the only two to reach the double figure milestone with Brennan Dick chiming in with 11 points to get his side over the line. With a prominent three pronged attack the Blues have a variety of options that can do damage to the scoreboard something they will be hoping they can do in their Round 2 match-up. Both Gabriel Gallego and Jack Macdonald nailed five points apiece and if they can up their ante in this top of the table clash it could be enough to get them over the line.

It was a complete performance from the Braves in Round 1 with a host of players stepping up to the plate and shouldering the load none more than Josiah Pattinson. He was simply unstoppable across the court seeming to have the ball on a string and hitting the scoreboard from anywhere knocking back five three-pointers to go with his three from the field. If he can replicate a similar performance once again this week it will go a long way in securing his side their second win. He was ably assisted by Martin Steen who recorded 19 points with Siologa Sui not far behind on 13 points. If Miles Watson and Darcy Lawler can both hit the scoreboard again they could ruffle some feathers.

Ringwood and Knox will face off with the Hawks hoping to turn the tables on last week’s performance while both Eltham and Southern Peninsula are looking for their first win of the season. Keilor are set to play host to Dandenong with the final game of the round between the undefeated Melbourne and Bulleen set to be an interesting one. In Pool 2 Geelong United and Ballarat face off while the Pacers make the trek to play Nunawading. Pakenham are searching for their second win of the season up against Nunawading 2 with Casey and Kilsyth fighting it out while Sandringham and Hawthorn close out the round.

It will be another big round of action in the Melbourne United Victorian Junior Basketball League (MUVJBL) Under-16s Girls Championship Division with the top sides set to face off and a host of teams searching for their first win of the year.

The battle for prime position on the ladder will be up for grabs in Round 2 of the MUVJBL with the first placed Melbourne taking on Bulleen. Melbourne got an easy 26-point win last week over their secondary team last week while the Boomers made light work of Keilor to run out 19-point victors making for an enthralling contest this round. Both sides have shown that scoring is no issue, able to post hefty totals and most importantly limit their oppositions chance of going to basket. Bulleen are a consistent unit, always looking to do the simple things well while Melbourne have shown that they can be explosive when it comes to the scoreboard pouring on 18 points in the final term last week, something they will be hoping to back up this round.

Expect the Tigers to play with plenty of confidence given their ability to hit the scoreboard easily and more importantly ability to share the shooting load evenly meaning they have a multitude of options. While they did not have, a single player reach double figures last round the Tigers had eight players register five or more points with Amelie Kamberis notching up a team-high nine points, an effort she will be hoping to replicate again this round. Neve Giddey was the next in line with eight points and will be looking to up the ante even more with the likes of Hayley Letts, Camille Letts and Chloe Kamberis also looking to chime in with bigger contributions against Bulleen to get them over the line. If Melbourne can continue their even spread it will give them an edge in the game able to share the ball around and provide a constant threat around the rim.

With a win under their belt and coming off impressive performances last round with 13 and 11 points respectively Lily Carmody and Tabitha Betson will have to go big again, against a strong Melbourne outfit. Carmody did most of her damage from inside the paint sinking five shots from that range but did manage to sneak a three-pointer highlighting her versatility and class across the court. Peyton Burns also plied her trade for the Boomers posting seven points for the match and will be wanting to further improve her scoring stats this round if she is to get her side over the line. Another couple of strong performances from fringe players Lily Amor, Chantal Vitale and Sarita Wright and the Boomers could quite easily topple their higher ranked opponent.

In other matches, Ballarat play host to Kilsyth while the fourth placed Casey are looking for their second straight win when they meet Nunawading. Diamond Valley and Keilor go head-to-head with Keilor hoping to right their wrongs from last round while Melbourne 2 and Bulleen 2 battle it out for bragging rights. In the Ashe Pool, Hawthorn and Sandringham kick the round off with Frankston and Eltham also set to lock horns. Dandenong go to visit Knox in hope of their first win while Waverley takes on the lowly Southern Peninsula. In the final game of the Ashe Pool, Latrobe Energy host Wangaratta with the latter looking for their second win.