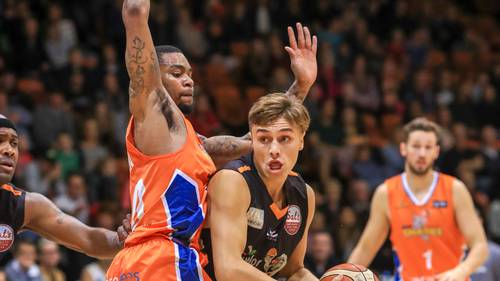 USING their first two picks to select a Southland Sharks duo for the upcoming New Zealand National Basketball League (NZNBL) season, Manawatu Jets are looking to rise up the ladder in 2020. After a last placed finish which saw them win just the two games in 2019, the Jets are hoping to fly high in Sal’s NBL Showdown this year thanks to the recruitment of former Sharks, Tom Vodanovich and Hyrum Harris to lead the offence.

The 201cm Tall Blacks forward was never going to last too long on the board, so it came as no surprise when Manawatu Jets selected him at pick three in the NZNBL Player Draft last week. Still only 25-years-old – to turn 26 during the season – Vodanovich arrives at the Jets after playing for Southland Sharks. Last season he averaged 12.2 points, 6.0 rebounds and 1.6 assists for the Sharks, showing he could get it done up both ends with a nice split between his offensive and defensive boards. Coming off the bench in all of the New Zealand Breakers’ Australian NBL games last season – including starting once – he averaged a couple of points and a rebound, but showed he could be a very solid rotation at the higher level. He returns with that experience and could be a huge danger to opposition players trying to guard him.

A versatile player who can play a role in multiple posiitons, Harris is 198cm and 105kg but for a big man he knows how to control the ball and has that perfect balance of offence and defence. In season 2019 playing for the Sharks alongside Vodanovich, Harris averaged the 11.0 points, 3.7 assists, 6.4 rebounds and 1.6 steals per game. His partnership with Vodanovich will help the Jets already have a strong one-two combo that knows the other player’s strengths and deficiencies. Like Vodanovich, Harris was able to play in the Australian NBL off the bench for the Illawarra Hawks, taking full advantage of the injury crisis at the club to post up 2.6 points and 1.3 rebounds coming off he bench in 16 matches.

Having previously signed with Franklin Bulls prior to the COVID-19 lockdown, the young college star for Northwest Nazarene University Crusaders returns to the NZNBL after a successful 2019-20 NCAA2 season. There Bezzant averaged 13.4 points, 3.8 assists and 1.8 rebounds, shooting at 52.3 per cent from inside the arc, but was renowned for his ability to shoot daggers from long range. At 188cm, Bezzant will look to start out of either the one or two spots on the floor.

Whilst the Jets were unable to pick up his co-captain in Jackson Stubbins, club legend Temata-Frost joins Manawatu for another season. It will be his leadership on and off the court that stands out the most leading a team that is vastly different to the one it might have looked like prior to COVID-19 lockdown. It was announced Temata-Frost would co-captain the Jets in 2020 on the club’s website.

“Tia showed last year that he was committed to developing as a player and always led by example in his approach. He embraced, more than anyone else, the need for continual improvement. Tia is part of a family legacy in this town. His father, Joe Frost, has given selflessly, arguably more than anyone, to basketball in the region over four decades. Tia is continuing in the same fashion. He is a man of true character and embodies our team values.”

Manawatu Jets begin their 2020 Sal’s NBL campaign up against Otago Nuggets on Wednesday night at 5.30pm, before playing back-to-back games over the weekend. In those matches, the Jets face off against Auckland Huskies on Saturday and Nelson Giants on Sunday.