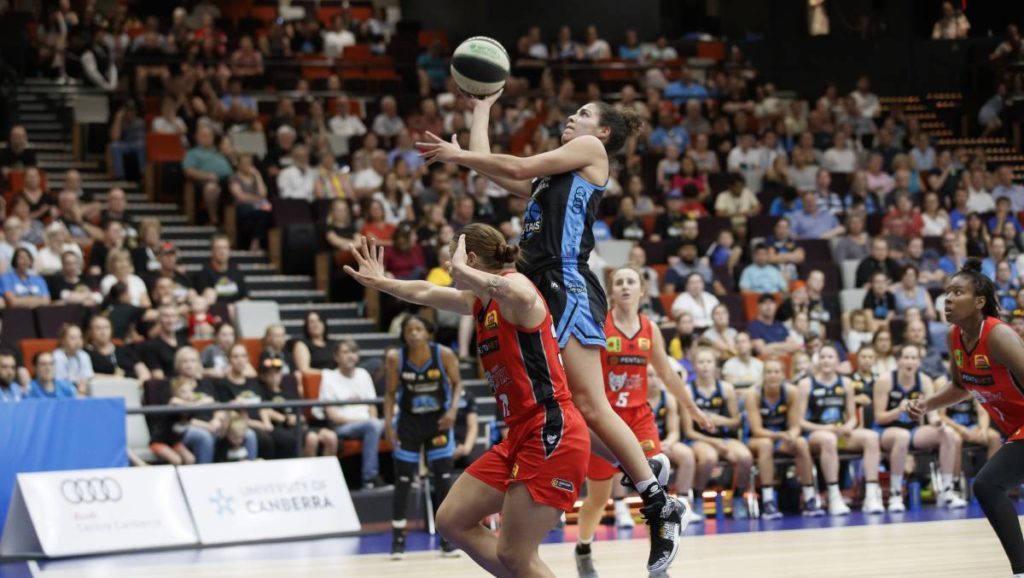 BOTH the Sydney Uni Flames and Southside Flyers are set to play two games in Round 7 with the Flyers hoping to maintain prime position on top of the ladder.

Bendigo Spirit will be hoping to end their three-game losing streak and get back on the winners list against the Sydney Uni Flames who have also failed to rack up a win in their last two outings, making for an intriguing contest. In fact, the Spirit have not won a game since the start of November and will want stay in touch with the fifth placed Perth Lynx. On the other hand, it is the first of two games for the Flames this round and they will be wanting to get off to a hot start to hopefully leapfrog their opposition up the ladder. Both teams are relatively evenly matched with a mere five points separating their overall points scored tally highlighting just how competitive this game could be.

Alice Kunek has been a key contributor for the Flames averaging 16.9 points per game along with 4.1 rebounds showcasing her impact across the court. Paired with the likes of Colleen Planeta (15 points and 7.4 rebounds) Jessica Kuster (10.8 points, 6.3 rebounds) the Flames have a wealth of stars to choose from to help steer the ship against the higher place Spirit. But the Spirit have some players that can take the game by the scruff of the neck and lead them to victory with Keely Wilson a class act averaging 10.3 points per game and 6.8 assists. Abigail Wehrung also boasts a healthy percentage from three point range at 45.2 percent and can hit the scoreboard averaging 9.3 points. Tessa Lavey and Shyla Heal can also make a difference for the Spirit.

There is no denying that Alison Schwagmeyer is a real barometer for the Perth side given her impressive talent under the rim and explosiveness. If she is let off the chains early it will go a long way in helping set her side up for victory with the guard averaging 18.9 points per game along with 7.5 rebounds and 2.3 assists. The Flyers have a plethora of options across the court with Sara Blicavs, Leilani Mitchell, Jenna O’Hea, Mercedes Russell and Rebecca Cole all combining to become a formidable force. Russell has taken the competition by storm with her attacking mentality and drive to the basket averaging a double-double thanks to her 15.8 points and 10.1 rebounds per game. With so many key players it will be hard to maintain all of them and stop them from having an impact.

It is a tale of two halves with the Capitals taking on the last placed Townsville Fire who have only managed the one win so far this season. The Fire have been competitive in games but have struggled to maintain any form of consistency or intensity for a full four quarters making it hard for them to win a game. The Capitals have won four games straight and will be keen to keep that streak running but when these two sides met back in Round 2 the Capitals only narrowly scraped through by two points proving that Townsville have what it takes to match it with the best of them, but a lot has changed since then.

Kia Nurse is instrumental for the University of Canberra (UC) credit to her points scoring ability really controlling the airways for her side with an average of 20 points. Partner in crime Kelsey Griffin is another key to the Capitals success with a double-double of 17.1 points and 11.8 rebounds per game while Keely Froling is not too far behind with 15.1 points and 6.8 rebounds. Marianna Tolo should not be underestimated and can turn the heat on at the drop of a hat. Although Townsville do not have the same firepower as their opponents Abby Bishop is no slouch with an impressive average of 20.2 points and 8.5 rebounds, Tess Madgen can also find the net.

The second placed Melbourne Boomers can turn on the afterburners when need be and will be hoping to inflict some scoreboard pain on the Sydney Uni Flames to cement their spot on the ladder. It will be the Flames second game for the round and their opposition does not get any easier coming up against a well-rested and raring to go Melbourne Boomers side who will be hoping to keep the scoreboard ticking over and notch up their third consecutive win.

The Boomers can score quickly and have a wealth of players to look to when the going gets tough thanks to their touch of class, experience and basketball nous across the court with the first in line Lindsay Allen. Allen is an excitement machine not afraid to back herself from range or in close shown with her average of 18.4 points per game. Cayla George can also set the court on fire with both her defensive and offensive pressure (14.9 points, 9.3 rebounds) while Ezi Magbegor offers another scoring option. For the Flames the usual suspects in Planeta and Kunek will have to take charge while Tahlia Tupaea can provide a point of difference.

In their second game of the round the Flyers will be hoping to build on their momentum and keep their winning streak alive against the fourth placed Lightning. The Lightning have been relatively inconsistent throughout the 2019/20 season winning four games and losing three but will be hoping to consolidate on their top four position. Expect Lightning to be fresh and buzzing with energy while the Flyers could be sore and fatigued heading into the match-up.

There is no denying that the Flyers are pretty well stacked when it comes to talent meaning the Lightning will have their hands full but Adelaide are not without their own game-changers. American Crystal Langhorne can cause havoc as shown averaging 20 points and 13 rebounds and will have to get on the move if she is to spur her side onto victory. Brianna Turner, Stephanie Talbot and Nicole Seekamp are also filled with skill and scoring prowess making their performance against the Flyers integral. Cole and Mitchell are both able to hit the scoreboard and can be real playmakers with their creative assists.